RealAspen News and Community Content Feed
By David O. Williams
Real Aspen – May 25, 2011
Wildfire season in Colorado's super-saturated high country seems so far off, but the debate over thinning beetle-killed forests to reduce fire risk around mountain towns remains at the forefront of an ongoing campaign to further revise the Colorado Roadless Rule.

Colorado Deserves More, launched last week by a cadre of Colorado conservation groups, is aimed at getting the Obama administration to dramatically increase the amount of U.S. Forest Service land in Colorado that would receive “top-tier” roadless protection under the proposed Colorado rule, which would replace the Clinton administration's 2001 Roadless Rule. 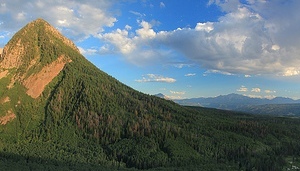 The Ragged Mountains could see oil and gas drilling under proposed Colorado Roadless Rule.
Colorado Deserves More
http://coloradodeservesmore.org/
The groups are worried there are too many road building exemptions for logging, energy infrastructure such as pipelines and power lines, ski area expansion and coal mining. They fear Colorado's roadless federal lands will be less protected under the new Colorado rule than they would be under the old Clinton rule from 2001 and that the state's $10 billion outdoor recreation, hunting, fishing and tourism industries will suffer as a result.

“Many of Colorado's roadless areas contain world class climbing routes, hiking and biking trails, rivers, and backcountry ski and snowshoe destinations,” Bryan Martin of the Colorado Mountain Club said in a release. “The availability of high quality outdoor recreation opportunities is a major contributing factor to the quality of life in our state. Simply put, many of our members live and work in Colorado because of these recreational opportunities.”

The latest version of the rule (pdf), released last month, allows for temporary roads to be built up to a half mile into the national forest to thin beetle-kill stands around mountain communities. Thinning by crews on foot can then occur another mile into the forest. Critics say that's way too far and completely unnecessary.

Dr. Barry Noon, a professor of wildlife biology at Colorado State University, participated in last week's announcement of the Colorado Deserves More campaign. In past interviews with the Colorado Independent he's argued against road-building exemptions for fuels mitigation so deep into the national forest.

“Localized treatment of bug-infested stands makes sense to me,” Noon said in an earlier interview. “What doesn't make sense to us is the proposals to harvest bug-infested stands or thin them at broad spatial scales, and particularly if doing that requires the building of new roads. There is an extensive scientific literature documenting the negative effects of roads on ecosystems.”

Vail Fire Chief Mark Miller recently told the Colorado Independent that for the past five years he has had a crew thinning a 200 yards of “defensible space” around the ski town to give firefighters a place to battle any future wildfires. His crews have completed about 75 percent of that project using existing roads and never having to build any new roads to get to stands of dead trees.

“If there were roads dotted all over back in there, would that help us get in and help us access it? Certainly it would,” Miller said. “Do I think that's a reason to have roads back in there? The answer is no, quite honestly.”

Miller, however, says he can see the argument from both sides.

“From a fire protection standpoint, if loggers can get in there and thin the forest, I think that is certainly a good reason to have the roads,” Miller said. “But I also know that with roads – and I'm not advocating recreational use or not in the forest – I'm just saying when you have roads, you have more people typically, which means susceptibility to fires, camp fires and that type of thing.”

In the White River National Forest surrounding Aspen and Vail, the Thompson Creek area near Carbondale is one of the roadless regions left off the top-tier list, according to Colorado Deserves More.

The groups would like to see the Forest Service tighten the top-tier protections to include no surface occupancy limitations on oil and gas leases and no loopholes for pipelines and utility lines. Overall, the groups also propose "limiting discretion that could allow logging far into the backcountry and removing allowances for new roads to develop and access future dams, reservoirs and water facilities."

Colorado Deserves More is hosting several events around the state even as the Forest Service is conducting open houses on the Colorado Roadless Rule. Tonight from 6-8 p.m. there will be a Denver Gallery Show photo exhibit at the American Mountaineering Museum in Golden.

I didn't attend the meeting in Montrose but I would like to say that I believe the dead trees should be taken out or control burn. It is a hazard waiting to happen. Lightening for one which happens often in the high country. It should be done soon. However many roads it takes the dead trees must be removed.
Thank you for letting me comment.
Sincerely,
Carolyn

Vail Fire Chief Mark Miller recently told the Colorado Independent that for the past five years, he has had a crew thin out 200 yards of "defensible space" around the ski town to give firefighters a place to fight any future wildfires. His crews have finished about 75% of that project without having to build any new roads. This is because they were able to get to the dead trees by using the roads that were already there. gmail