RealAspen News and Community Content Feed
By David O. Williams
Real Aspen – May 23, 2011
Colorado Sen. Mark Udall, a Democrat, and Rep. Scott Tipton, a Republican, are miles apart on energy and environmental policy, but the two have come together on the issue of determining the future of Colorado National Monument between Grand Junction and Fruita.

They've put together a “community group” of 16 influential local leaders to hold Western Slope meetings and gather input from area residents to help determine whether the 100-year-old national monument should be turned into a national park – a higher level of protection that carries more national prestige. Such a designation could bring in more tourists, but it could also come with more federal restrictions on various uses.

Tipton, who represents the area in the 3rd Congressional District, has been battling the U.S. Interior Department over Secretary Ken Salazar's Wild Lands Order, which compels the U.S. Bureau of Land Management to identify BLM lands appropriate for wilderness designation. 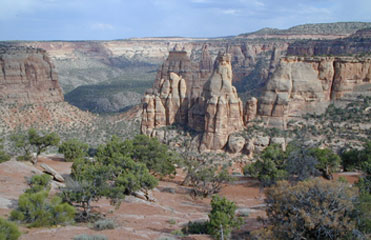 Salazar contends plenty of public lands are available for oil and gas drilling, and that, in fact, the industry needs to start developing more of the acreage it already has under lease. Tipton says Democrats and the Obama administration are locking up too much federal land and blocking domestic energy production.

Udall, on the other hand, favors more alternative energy production and says America can't drill its way out of the current energy crisis by overdeveloping federal lands in Colorado. But on the issue of converting Colorado National Monument into national park, both lawmakers seem to agree that the local populace should have the final say.

“Visitors to the area may think of a monument and, unfortunately, expect to see a stone marker, so a national park designation could better reflect the stunning land Coloradans cherish,” said Udall, chairman of the Senate Subcommittee on National Parks “But any changes to public lands need to be a locally led effort. We want this group to be a mouthpiece for the people, so there can be a consolidated recommendation for the monument's future. It is simply essential to hear others' perspectives to ensure a balanced policy for the community.”

Udall was on hand over the weekend for ceremony commemorating the 100-year anniversary of the area's designation as a national monument. Officials will unveil a new visitor center. Tipton is not scheduled to attend, but he also favors local input – particularly from the Grand Junction-area business community – in determining the monument's future.

“This is a community driven effort to determine the best options for the future of the Colorado National Monument,” Tipton said in a joint release with Udall. “This committee, assembled with the lead of Club 20 and the Chamber of Commerce, includes the business owners, ranchers, educators and residents who call the region home. We will look to them for guidance on what the next steps should include, and for information and data on what the best outcome would be for the community.”