RealAspen News and Community Content Feed
By Troy Hooper
Real Aspen – May 19, 2011
SNOWMASS VILLAGE — It's hard to believe camels ever grazed these slopes but the latest discovery in a splendiferous Ice Age dig in this ski resort suggests that's precisely what happened.

A Gould Construction worker sifting through sediment removed from the dig site uncovered the two-inch lower molar of a camelops, which is an extinct genus of camel that disappeared 10,000 years ago.

It is the newest find in a mother lode of prehistoric bones uncovered during a reservoir expansion project last fall that has yielded a spectacular prehistoric ecosystem nearly perfectly preserved in peat. 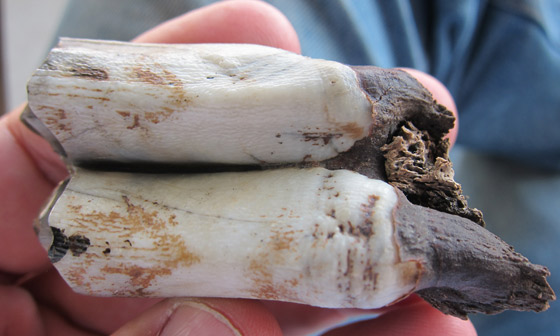 Teeth from a camelops found in Snowmass Village.
Denver Museum of Nature and Science
To date, as many as 10 American mastodons, four Columbian mammoths, two Ice Age deer, four Ice Age bison, a Jefferson's ground sloth, a tiger salamander, insects, snails, and large quantities of plant matter have been recovered from what scientists say is the most significant find in Colorado history.

The extinction of the camelops coincided with a massive die-off of mastodons and other large North American animals at the end of the Pleistocene period. Roughly seven feet at the shoulders, the species is slightly taller than modern camels and scientists say it is unclear whether the camelops possessed a hump or went without one like its other relative, the llama. It is believed to have been an herbivore.

The Denver Museum of Nature & Science held a press conference Tuesday in Snowmass Village to announce that its huge paleontological crew is back on the job digging and sifting through dirt for the next seven weeks before it hands the site back over to the Snowmass Water and Sanitation District.

The first radiocarbon tests of the silt layers at the bottom of the reservoir, where many of the fossils have been found, are at least 43,500 years old, according to the Denver Museum of Nature & Science.

Paleontologists on the ground also reported this week that they have unearthed the rare radius bone of the giant Jefferson's ground sloth, as well as a humerus, or upper arm, and vertebrae of a mastodon.

The Ice age is the time that is hundreds of year agro and the time when the existence of human being was not so sure and supportive. The discovery of the camel teeth by the construction worker in the village has the online essay writers evidence for the existence of living thing at that time.

I just discovered your weblog and expected to give that I have really thoroughly enjoyed the experience of looking at your blog entries. Considering, I'll be buying your feed and I trust you structure again soon. Escorts in Jaipur
Call Girls in Jaipur
Jaipur Escorts Service
Jaipur Escorts

I have researched this post and if I would have the choice to wish to propose to you a few enchanting things or advances. Call Girls in Jaipur
Jaipur Escorts Service
Jaipur Escorts
Jaipur Call Girls

It is an incredibly sensible site in a way that is better than standard articles. I have really procured some sublime experiences dissecting your blog pieces. Anyway, I trust in you to post again soon. Jaipur Escorts Service
Jaipur Escorts
Escorts in Jaipur
Call Girls in Jaipur

Intriguing posts and an obligation of thankfulness is all together for sharing. A few things here I have not considered some time beginning late. Jaipur Escorts
Jaipur Call Girls
Escorts in Jaipur
Call Girls in Jaipur

I'm irritable to reveal this page. I need to thank you for your time for this especially fundamental read!! I certainly genuinely regarded all pieces of it and I additionally have saved you to take a gander at new data in your site. Jaipur Call Girls
Escorts in Jaipur
Call Girls in Jaipur
Jaipur Escorts Service