DeGette's FRAC (Fracturing Responsibility and Awareness of Chemicals) Act would compel the industry to disclose chemicals used in the process, which industry officials say must be kept under wraps for proprietary reasons. Known as “fracking,” the process frees up more gas by injecting water, sand and chemicals into natural gas wells deep underground – too deep to contaminate groundwater supplies, industry officials say.

DeGette points to anecdotal evidence of fracking causing groundwater contamination and to recent probes by her congressional committee revealing diesel fuel and up to 29 known cancer-causing human carcinogens are being used in hydraulic fracturing operations. She wants the chemicals disclosed and regulated under the Safe Drinking Water Act. 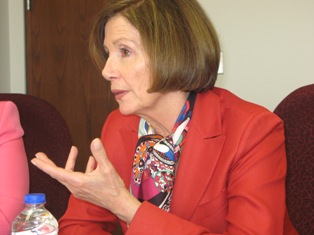 U.S. House Minority Leader Nancy Pelosi.
David O. Williams
Pelosi chimed in that the industry should want the same thing, if for no other reason than to “protect” itself. That sentiment is echoed by environmental shareholder groups that forced votes at ExxonMobil – the nation's largest natural gas producer with its acquisition last year of XTO Energy – and other natural gas companies showing some support for the full disclosure of fracking chemicals. The groups view the move as a means of avoiding future litigation.

Similar votes have occurred among shareholders of companies such as Williams, the largest natural gas producer on Colorado's Western Slope.

Pelosi said the industry should not continue to oppose the release of more information on fracking by arguing there's been no evidence thus far of fracking contaminating groundwater.

“It's a catch 22 in that there's no reporting and so they say there's no evidence, so let's find out,” Pelosi said. “And I think it's a really important issue that deserves a bright spotlight on and it may be that they're not in violation of the Safe Drinking Water Act and that they're going deeper [than groundwater] or whatever it happens to be. If there's so much natural gas that they want to get at, the public has a right to know [the chemicals].”

Pelosi said fracking has sparked a highly emotional debate around the country that needs to be informed by more study, more information and greater industry transparency.

“Natural gas is a domestic supply that again is plentiful and is not so expensive and I hope not as dangerous to the environment as other fossil fuels. The evidence seems to point that it isn't,” Pelosi said. “It's a great transition to when all the renewables are ready and much more operating. And it may be that it's clean enough to be an answer for a very long time to come. But this [fracking issue] has to be cleared up.”