RealAspen News and Community Content Feed
By David O. Williams
Real Aspen – April 7, 2011
Two days after a conservative group filed a lawsuit in U.S. District Court in Denver challenging Colorado's renewable energy standard (RES), Colorado Sen. Mark Udall – who was instrumental in getting voter approval for that RES back in 2004 – introduced a bill with his cousin Tom Udall, D-N.M., to establish a national standard.

Mark Udall has tried several times in the past to model a federal standard after Colorado's RES, which is the second most aggressive in the United States behind only California. Last year he and Colorado Sen. Michael Bennet tried unsuccessfully to at least pass a federal RES even when it looked like a comprehensive climate bill didn't have enough votes to make it out of the Senate.

The Udalls' latest bill would require utilities to generate 25 percent of their electricity from wind, solar and other renewable energy sources by 2025. Colorado's RES, first approved by voters in 2004 at the 10 percent by 2020 level, has since been legislatively increased to 30 percent by 2020.

The latest Udall bill would require utilities nationwide to generate 6 percent of their power from renewable energy sources by 2013, followed by gradual increases up to 25 percent by 2025. Including Colorado and New Mexico, 29 states and the District of Columbia currently have some sort of RES.

“I was proud to lead the effort in Colorado to pass one of the country's first Renewable Electricity Standards – and it has helped the state create over 30,000 new good-paying jobs and spurred the growth of one of the strongest renewable energy sectors in the country,” Mark Udall said in a release.

“We can do the same thing across the country with a robust national RES. A national RES would unleash innovation, helping America compete for renewable energy manufacturing jobs and lead in the global economic race.”

A recent PEW Environment report revealed the United States has dropped to third behind China and Germany in renewable energy investment.

The Udalls first introduced a RES in 2002 while members of the House. They later built a coalition in the House that won passage of a national RES amendment in 2007, but it died in the Senate. When both were elected to the Senate, they introduced another national RES bill in 2008. 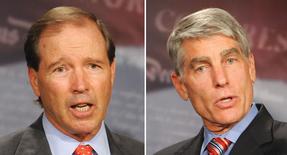 “Americans want to put our nation on a path towards energy independence, and this bill is our best chance to get America running on homegrown energy while creating good jobs for hardworking Americans,” Tom Udall said in a release.

“Studies show that a federal RES would reduce energy bills, revitalize rural America, slow global warming and strengthen our energy security. With American innovation and ingenuity, we can put our people to work in a thriving, clean energy economy.”

Last week Mark Udall introduced a resolution in support of the Clean Air Act, which the GOP-controlled House – including members of the Colorado delegation — has been trying to dismantle in order to prevent the U.S. Environmental Protection Agency (EPA) from regulating greenhouse gas emissions as a form of air pollution. The resolution was signed by 33 other senators and makes it clear that any anti-EPA bills that make it out of the House will likely die in the Democrat-controlled Senate.

Once the deal has been signed, it's quite obvious that you will not stay in China until the goods are prepared, tested and then shipped. Justchinait Guangzhou

Thanks for the sensible critique. Me & my neighbor were just preparing to do a little research on this. We got a grab a book from our local library but I think I learned more from this post. I am very glad to see such great info being shared freely out there. Jennair refrigerator repair

Thank you for this great website. I am trying to read some more posts but I cant get your blog to display properly in my Firefox Browser. Thank you again! instagram likes

This is really interesting, You’re a very skilled blogger. I’ve joined your rss feed and look forward to seeking more of your magnificent post. Also, I’ve shared your web site in my social networks! 대구출장안마

Visto di emergenza per l'India I didn’t quite understand this when I first feature it. Merely when I went through it a second time, it all became clear. Thanks for the brainstorm. Absolutely thing to remember just about.

I am typically to blogging and i really appreciate your content regularly. This content has really peaks my interest. I’m going to bookmark your web site and maintain checking for first time information. ครีมกันแดด

Get to know why News means very much to us. Httpmarketing klanten reviews Zeeland

Hey very nice blog!! Man .. Excellent .. Amazing .. I will bookmark your website and take the feeds also…I am happy to find a lot of useful info here in the post, we need develop more techniques in this regard, thanks for sharing. . . . . . Shutter Door Repair London

I’m impressed, I must say. Truly rarely do I encounter a weblog that’s both educative and entertaining, and let me tell you, you’ve got hit the nail around the head. Your concept is outstanding; the catch is a thing that insufficient persons are speaking intelligently about. I am happy which i found this at my try to find something relating to this. 메이저사이트

If you happen to acquiring a substantial repayment, you have to keep in mind what quantity of money you could be deducting coming from paydays or maybe spending money on for quarterly income taxes. Geen tijd als ondernemer om buitendienst afspraken te maken?

After study a few of the blog articles with your site now, and that i genuinely as if your means of blogging. I bookmarked it to my bookmark website list and are checking back soon. Pls have a look at my internet site in addition and figure out what you think. Real estate Bangladesh

i can play scrabble all day long cause i love to play with words and rearrange them for higher points:: fashion clothes bidvaluable

I am pleased that I detected this web site, precisely the right info that I was searching for! . merchant processing iso program