Beginning at 9 a.m. on Tuesday, April 5, eastbound and westbound I-70 will be closed to through traffic between the U.S. 40/Empire (Exit 232) and Silverthorne (Exit 205) interchanges, allowing crews to safely bring down a large, unstable cluster of boulders located on the slope above the highway. 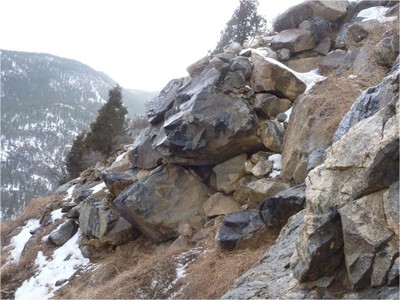 Unstable rocks above I-70 near Georgetown.

Local traffic between Empire Junction and Georgetown (westbound) and between Silverthorne and Silver Plume (eastbound) still will be allowed to travel I-70 up to the closure points, closer to the rockfall site. Due the number of boulders that need to be removed, the highway is expected to remain closed until 5 p.m.

If the mitigation is not completed on Tuesday, the Colorado Department of Transportation (CDOT) will need to close I-70 again from 9 a.m. to 5 p.m. on Wednesday, April 6. In addition, CDOT may need to also repair any fencing or netting that is damaged from the falling rock and debris.

While I-70 is closed, the primary detour routes between the Front Range and the Western Slope are: