“While we've reduced elk numbers in recent years in areas where elk were raising issues for landowners, we've still got plenty of elk for people who want to hunt,” said CDOW northwest regional manager Ron Velarde. “Our two largest herds in northwest Colorado have more elk than most other states, and we have 43 other elk herds in Colorado.”

Colorado is home to an estimated 460,650 deer, 214,536 elk and 76,710 pronghorn antelope – mostly on more than 23 million acres of public land. CDOW estimates hundreds of thousands of hunters pump more than $300 million in direct revenue into the Colorado economy every fall. 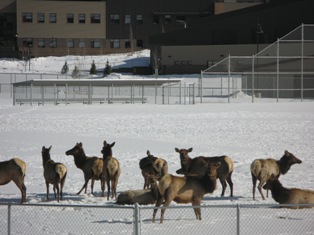 Elk loiter on the baseball diamond at Battle Mountain High School in Edwards last week.
By Nick Williams
Recent increases in licenses and lands available for hunting led to a record harvest of 12,301 pronghorn during the 2010 seasons, topping the 2009 record of 10,941. The 2010 mule deer harvest of 34,768 was up from the 2009 total of 33,922, according to CDOW's 2010 harvest stats.

The Theodore Roosevelt Conservation Partnerships (TRCP) expressed reservations ahead of a meeting on the proposed plan at U.S. Forest Service offices in Lakewood on Monday. The Obama forest management plan would replace a rule governing 193 million acres of national forest and grasslands nationwide that's been in place since 1982. The TRCP is a nonprofit conservation group made up of sportsmen advocating for wildlife habitat protections.

“Two issues of the highest importance to sportsmen on public lands are recreation and fish and wildlife habitat,” reads a TRCP release. “While they might be of equal importance, if recreation is elevated above habitat, then we have the potential to degrade habitat, which actually results in fewer opportunities to hunt, fish, and enjoy wildlife.

“For example, if a forest has an excessive motorized route density, elk will flee to private land, resulting in less recreation opportunities for the public to enjoy elk.”

0 Comments on "Hunting harvests high in 2010, but some Colorado conservation groups worried wildlife habitat in danger"