RealAspen News and Community Content Feed
By David O. Williams
Real Aspen – August 2, 2010
As the U.S. Senate wrangles over what's left of meaningful energy policy reform before the August recess, Colorado's conservation community is watching closely to make sure onshore oil and gas drilling gets as much attention as the offshore drilling that led to BP's Deepwater Horizon disaster.

Provisions aimed at protecting the state's water, wildlife and overall status as an outdoor recreation mecca are still in play in a bill still kicking around the Senate, but environmentalists are worried they'll be stripped out or severely watered down as lawmakers rush to get something done on the energy front after the failure of a comprehensive climate bill last week. 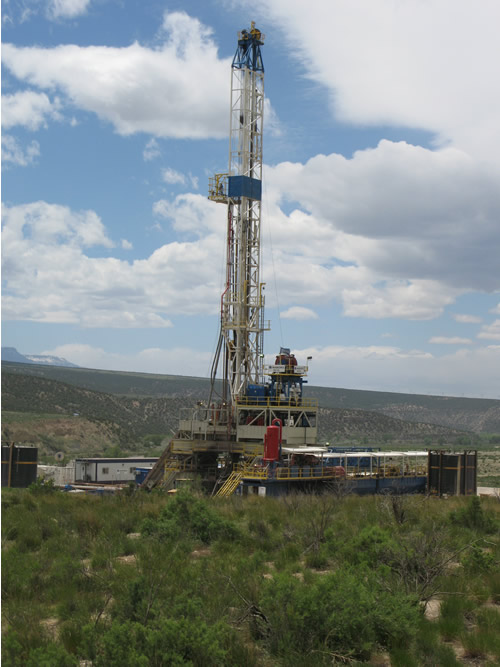 On Thursday, Rep. John Salazar, a blue-dog Democrat from Colorado's natural-gas-rich 3rd Congressional District and the brother of Interior Secretary Ken Salazar, introduced an amendment that would strip out many of the most stringent aspects of a key energy reform bill called the CLEAR Act.

On Friday Salazar came up short in his bid to water down the bill and joined Colorado Republicans Mike Coffman and Doug Lamborn in voting against the bill, which narrowly passed by a 209-193 margin. Democrats Diane DeGette, Betsy Markey and Jared Polis voted for the bill.

Not all ranchers in energy-rich areas of the state agree with Salazar's approach on agricultural issues as they relate to oil and gas production.

“The West is more than just potential gas and oil fields; it is a way of life for those who work, live or play here,” Moffat County rancher Wes McStay said. “For too long, those of us who make our living on the land have been subject to the risks from oil and gas drilling. It is time that Congress requires that big oil and gas companies use the best and safest practices available.”

Last summer, DeGette introduced the Fracturing Responsibility and Awareness of Chemicals (FRAC) Act to remove an exemption for hydraulic fracturing – in which water, sand and undisclosed chemicals are injected into gas wells to fracture geological formations and free up more gas – under the Safe Drinking Water Act. That exemption was granted during the Bush administration in the Energy Policy of Act of 2005, which also allowed for categorical exclusions to speed up natural gas drilling.

An earlier version of Rahall's CLEAR Act contained DeGette's calls for public disclosure of chemicals used in hydraulic fracturing, or “fracking,” because of health concerns related to the possible contamination of drinking water supplies by the process. That language was stripped out of the Rahall bill but is in a bill introduced last week in the Senate by Majority Leader Harry Reid, D-Nev.

Major gas producers in Colorado want the state to continue to regulate the process and the feds to stay out of hydraulic fracturing, which they claim is safe and has never been proven to cause groundwater contamination. But a new report by the National Wildlife Federation suggests the process is far more dangerous than the industry lets on, including potential risks to emergency responders dealing with fracking chemical spills.

Produced water spills – sometimes caused by the improper storage or handling of water used in hydraulic fracturing – are fairly common, although industry officials point out that the percentage of toxic chemicals in the water is actually very low.

Still, a review of the Colorado Oil and Gas Conservation Commission (COGCC) website by the Colorado Independent found a pattern of spills by just one operator in one Colorado county over the past eight years.

BP America, according to the state oil and gas regulatory agency, has self-reported 141 produced water spills totally nearly 1.2 million gallons of fluids in La Plata County since 2002. The most recent one – in February on Southern Ute tribal lands – spewed 189,000 gallons of produced water.

BP America's Senior Director of Government and Public Affairs Lisa Hough said fracking is not to blame and can be handled by state regulators.

“We really think that the states have done, especially Colorado, has been a leader, and we think the state rules and regs have been sufficient,” Hough said in an earlier interview. “You have to remember there's never been an incident of fracking, or a claim that a frack job itself, has caused any violation of the Safe Water Drinking Act.

“BP, we went through the process on the rules and regs in Colorado and in Wyoming and we support the states' efforts and we think the states are the appropriate level to regulate those.”

A recent call by Republican state lawmakers to keep the EPA out of fracking regulation – no matter the conclusions of an ongoing study of the process by the federal agency – appears to run counter to mounting public sentiment that there needs to be more done to regulate oil and gas drilling as it relates to water use in what is essentially a very arid state.

COGCC officials this spring admitted that enforcement of spill violations needs to be a top priority for the state agency, which has a backlog of investigations. Last week the COGCC announced the largest fine ever, hitting Williams with a $423,300 penalty in the case of a De Beque man who chugged benzene-tainted water from his well.


Editor's note: Late Monday, Senate Majority Leader Harry Reid said that because of a lack of votes he had decided to put off floor debate on his oil spill and energy reform bill until after the August break, which begins Friday.

my sister has a dancewear that is full of glitter, it looks cheeky but nice- https://HubJOKER888.com

You really should get involved in a tournament for example of the best blogs online. I’m going to suggest this blog! http://www.55xo.co

Hi there very nice blog!! Guy .. Excellent .. Wonderful .. I’ll bookmark your site and take the feeds also?KI’m glad to seek out a lot of useful info here in the submit, we want work out more strategies on this regard, thanks for sharing. . . . . . Vloga za vizum za Turčijo

Thanks for the information provided! I was looking for this information for quite some time, but I wasn’t able to see a dependable source. 스웨디시 사이트

Superb post but I was wanting to know if you could write a litte more on this subject? I’d be very thankful if you could elaborate a little bit further. Many thanks! Візовий центр Туреччини

I’d ought to talk with you here. Which isn’t some thing It’s my job to do! I quite like reading a post that will get people to think. Also, thanks for permitting me to comment! 꽁머니 안전놀이터

This site is usually a walk-through you discover the details you wished with this and didn’t know who must. Glimpse here, and you’ll absolutely discover it. 메이저사이트

I love your blog.. very nice colors & theme. Did you create this website yourself? Plz reply back as I’m looking to create my own blog and would like to know wheere u got this from. thanks บาคาร่าออนไลน์

wohh precisely what I was looking for, thankyou for putting up. Latiki Visa sou entènèt Aplikasyon

There are some interesting deadlines on this article but I don’t know if I see all of them middle to heart. There is some validity but I’ll take maintain opinion till I look into it further. Good article , thanks and we wish extra! Added to FeedBurner as well 먹튀폴리스

Attractive section of content. I just stumbled upon your blog and in accession capital to assert that I get in fact enjoyed account your blog posts. Any way I’ll be subscribing to your feeds and even I achievement you access consistently quickly. ニュージーランド入国ビザオンライン

Hello, I just hopped over to your web page via StumbleUpon. Not somthing I would usually browse, but I appreciated your thoughts none the less. Thanks for making some thing well worth browsing. 꽁머니 토토사이트

Thanks for the great post on your blog, it really gives me an insight on this topic.:-:;” 먹튀사이트

I real pleased to find this site on bing, just what I was looking for : D too saved to bookmarks . 우리카지노

not everyone would need a nose job but my girlfriend really needs some rhinoplasty coz her nose is kind of crooked; 안전놀이터

Definitely believe that which you stated. Your favorite reason seemed to be on the net the easiest thing to be aware of. I say to you, I definitely get annoyed while people think about worries that they just don’t know about. You managed to hit the nail upon the top as well as defined out the whole thing without having side effect , people can take a signal. Will likely be back to get more. Thanks read click

Hair Getting regular trims is essential. Using a smoothing serum that works for your hair can do wonders to make your hair shiny and lovely inside a flash. Combined with a ceramic flat iron, your hair will look shiny and silky smooth in minutes, even if you didn’t eat correct or get enough rest 무직자작업대출

*An impressive share, I just given this onto a colleague who was doing a little analysis on this. And he in fact bought me breakfast because I found it for him.. smile. So let me reword that: Thnx for the treat! But yeah Thnkx for spending the time to discuss this, I feel strongly about it and love reading more on this topic. If possible, as you become expertise, would you mind updating your blog with more details? It is highly helpful for me. Big thumb up for this blog post! Indisk Visa Online

he he i love catfights that is why i love Amanda Bynes. i think that she is a very humble woman too; US VISA ОНЛАЙН

I have been checking out a few of your stories and i can state pretty good stuff. I will definitely bookmark your blog Mini Skate Park

It??s nice to definitely locate a blog the spot that the blogger is . Appreciation for making your blog site. NOODVISUM CANADA

You made some decent points there. I looked on the net for the issue and discovered most people may go as well as with your internet site. กล้องวงจรปิดไร้สายดูผ่านโทรศัพท์

I think this is one of the most significant information for me. And i’m glad reading your article. But should remark on some general things, The web site style is perfect, the articles is really great : D. Good job, cheers 6.5 Grendel

i was just browsing along and came upon your blog. just wanted to say good blog and this article really helped me. https://wittycreators.in/

I am glad to read this post, it’s an impressive one. I am always searching for quality posts and articles and this is what I found here, I hope you will be adding more in future. INDIA VISA ONLINE