Despite winning 41 World Cup races in her stories career – the fifth most all-time -- Vonn has never captured a GS. She's won at least one race in every other discipline. Today she was third behind Viktoria Rebensburg, of Germany, and Denise Karbon, of Italy. 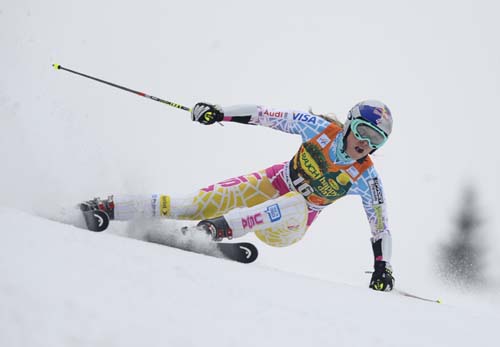 “I've been waiting for a long time for a good result in giant slalom,” Vonn said. “I knew the skiing was there; it was just a matter of putting down two solid and aggressive runs. This is just great timing to say the least.”

Vonn is trying to win her fourth straight overall title, which would be an American record, but her good friend and rival Riesch has been leading most of the season.

“I didn't actually know that Maria almost went out until after the race was over,” Vonn said. “When I was in the starting gate, I actually thought Maria was winning and was more motivated to attack.”

Since she left last month's World Championships in Garmisch early because of concussion symptoms from a GS training crash, Vonn has finished 6-1-2-2-2-1-3 in World Cup races, and she's closed a seemingly insurmountable deficit in the overall chase to less than 40 points.

“After Are [Sweden last weekend] things changed a bit,” Vonn said. “I was down almost 200 points and I just changed my mental approach. I basically had nothing to lose at that point and that's how I've been skiing. Hopefully I can keep that going into tomorrow's race as well as World Cup Finals.”

Sunday is the last regular-season World Cup race of the season – a slalom. Then it's World Cup Finals , where all of the race disciplines are contested.

“We've known for so many years that she can be on the podium in GS too,” head coach Alex Hoedlmoser said “It's not like this is a big surprise, now is just a really good time to do it. I have to say, things are moving in the right direction.”

“That break she had after the medal at World Championships was totally the right decision,” he said. “She got some rest, which was really important and then the new mission started. She just started focusing on every race – one at a time – and started hammering it.”

Vail's Sarah Scleper was 20th today, and Vail's Mikaela Shiffrin started the race but didn't qualify for a second run.

Truly, this article is really one of the very best in the history of articles. I am a antique ’Article’ collector and I sometimes read some new articles if I find them interesting. And I found this one pretty fascinating and it should go into my collection. Very good work! Aanleggen zwembad

I love the way you write and share your niche! Very interesting and different! Keep it coming! Ontwerp tuin

Just saying thanks will not just be sufficient, for the fantasti c lucidity in your writing. I will instantly grab your rss feed to stay informed of any updates. Zwembadbouw Limburg

I like viewing web sites which comprehend the price of delivering the excellent useful resource free of charge. I truly adored reading your posting. Thank you! Zwembadaanleg

I would like to thank you for the efforts you have made in writing this article. I am hoping the same best work from you in the future as well.. Ontwerpen tuin

Thanks for the best blog. it was very useful for me.keep sharing such ideas in the future as well. Luxe zwembad

Hi! This is my first visit to your blog! We are a team of volunteers and new initiatives in the same niche. Blog gave us useful information to work. You have done an amazing job! Zwembad bouwen

You completed certain reliable points there. I did a search on the subject and found nearly all persons will agree with your blog. Zwembad plaatsen tuin

This is a great post. I like this topic.This site has lots of advantage.I found many interesting things from this site. It helps me in many ways.Thanks for posting this again. Tuinarchitectuur

This website and I conceive this internet site is really informative ! Keep on putting up! Zwembad laten bouwen

You have done a great job. I will definitely dig it and personally recommend to my friends. I am confident they will be benefited from this site. Polypropyleen zwembaden

I am very enjoyed for this blog. Its an informative topic. It help me very much to solve some problems. Its opportunity are so fantastic and working style so speedy. Architect tuin

Thanks for the best blog. it was very useful for me.keep sharing such ideas in the future as well. Monoblock zwembad

wow, great, I was wondering how to cure acne naturally. and found your site by google, learned a lot, now i’m a bit clear. I’ve bookmark your site and also add rss. keep us updated. Zwembadbouwers

I’m excited to uncover this page. I need to to thank you for ones time for this particularly fantastic read!! I definitely really liked every part of it and i also have you saved to fav to look at new information in your site. Polypropyleen zwembaden