The ski company in 2009 shifted environmental funds from purchasing wind-power credits to the fire restoration project along the South Platte River on Colorado's Front Range. That investment, which stirred some debate over VR's corporate conservation contributions, now appears to be paying off. 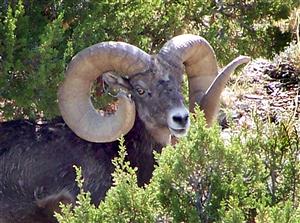 In 2002, the largest fire in Colorado's recorded history seared a giant burn into the rugged landscape along the South Platte River canyon southwest of Denver. The 138,000-acre Hayman fire – the largest in state history in terms of area -- destroyed 133 homes and caused $40 million in damages. It also transformed the landscape into a big-game paradise.

By scouring trees off of the area's granite outcrops and knobs, the Hayman fire restored historic habitat for Colorado's state animal, the Rocky Mountain bighorn sheep. This month, biologists from the Colorado Division of Wildlife released a band of 12 young bighorn back onto Thunder Butte near the Four Mile State Wildlife Area on the eastern side of the canyon during the second year of a three-year restoration project. Biologists anticipate that most of the nine females, or ewes, are pregnant and hope that the new band will increase in numbers in the coming years.

"Bighorn sheep are one of our most prized wildlife species and this was historically bighorn range," said Janet George, a senior terrestrial biologist with the Division's Northeast Region. "It is gratifying to be able to do something good by bringing them back to a place like this."

This year's release follows a similar operation in early 2010, when three rams and nine ewes, also from the Rampart Range herd, were released across the canyon near an outcrop known as Sheep Rock. Researchers documented that three of those sheep were lost to predators, but two lambs born last year survived to become new members of the young band of bighorn.

Bighorn were once common in the region, with settlers naming outcrops like Sheep Rock and Sheep Nose for the wild sheep. But their numbers dropped due to the hunting pressure that characterized the settlement period. During the century followed, aggressive suppression of wildfires allowed the establishment of a vigorous mixed-conifer forest.

In Colorado, bighorn typically favor exposed, steep or broken landscapes dominated by grass, low shrubs and rocky terrain for escape. With the exclusion of fire, the forest that gradually overran the meadows and knobs of the Hayman country eliminated the grassy, open landscape that bighorn, deer and elk favor. As a result, wild sheep have been absent from much of the area for the past 50 years.

In 2002, a severe drought set the stage for a massive fire, ignited on June 8 by a careless Forest Service employee. The Hayman fire burned for more than a month and at one point appeared poised to charge into the Denver suburb of Roxborough. When the smoke cleared, Coloradans were shocked by the abrupt transformation of more than 215 square miles of green and unbroken forest sweeping up from the canyon to the peaks of the Tarryall and Kenosha ranges.

While the fire left a mosaic of open land and singed-but-surviving timber, it appeared to many that the fire had created a wasteland. However, the elimination of the forest canopy and the conversion of trees to fertilizing ash allowed for the rapid establishment of grasses and reestablishment of fire-adapted shrubs.

In 2006, DOW biologists, working with additional funds from the Rocky Mountain Bighorn Society, began studying the site for reintroduction. GIS mapping analysis and site visits confirmed that conditions were ripe for the return of the bighorns. Within the 138,000-acre Hayman Burn, 97,606 acres or 70 percent of the fire's footprint is now suitable bighorn habitat.

Since this year's release in mid-February, biologist Heather Halbritter has been tracking the movements of the two bands of sheep using radio-telemetry gear. Signals from the sheeps' radio collars confirm that all of the Thunder Butte bighorn are alive and exploring the terrain in their new home. Across the canyon, the Sheep Rock band is also intact and established in new habitat. Both bands of bighorn sheep will continue to be monitored for the next several years, as DOW studies the success of the transplant.

In addition to bighorn, large numbers of elk and mule deer have recolonized the area on their own, thriving on the grasses and forbs that now grow among snags blackened by fire.

"The Hayman fire was a tragedy for the people who lived here," Halbritter said. "But for wildlife, the Hayman Burn provides a new beginning in a more productive habitat for years to come."

For video of the Hayman burn and the bighorn release, click here.