RealAspen News and Community Content Feed
By Real Vail
Real Aspen – February 25, 2011
ARE, Sweden – Vail's Lindsey Vonn lost more ground to her friend and rival Maria Riesch of Germany today as the two battle for the overall World Cup title in the final month of the season. Vonn won the super G leg of a World Cup super combined race but faltered in the slalom portion to hand Riesch the victory and 100 more World Cup points.

Vonn picked up 40 points by finishing sixth, but Riesch increased her lead by 60 points and now leads Vonn, the three-time defending overall champion, by 216 points.

“It's going to be a battle for the overall title until the last race of season,” Vonn said. “I've still got a lot of fighting to do.” 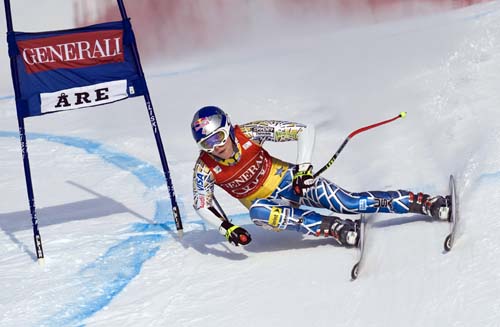 “It's been an ongoing battle throughout the whole season,” Hoedlmoser said. “Maria is skiing really well in all disciplines and has a lot of confidence. She's definitely a challenge and it's going to be tough to be beat her because she's very consistent this year. Lindsey has to chase her now. But there still are a lot of points out there to grab. It's over when it's over.”

Vonn said she's feeling fully recovered from a training accident earlier this month that caused her to pull out of the World Championships after winning a silver in downhill.

“The super G was solid, aggressive and just like I know I can ski,” Vonn said. “I was driving my skis the whole way down and definitely feeling back to my normal self. My super G was really encouraging, but I'm pretty frustrated with my slalom. I've been training really well in slalom, but haven't been able to put it together in a race. I had a hard time with the groove and lost my balance on a rut about 10 gates in and never really got my rhythm back.”

Vonn spent several days in a wellness hotel after leaving the World Championships. Then she did some slalom training before flying to Are on Red Bull's private jet. A World Cup downhill is on the schedule for Saturday in Are, site of the 2007 World Championships.

The main goal of an essay is to be understood in the argument. Therefore, strive for clear, precise and scientific expression.I read it from hublichessacademy. They have many other articles to.