Vail-area Rep. Polis, some energy experts doubtful oil shale will ever pan out

Polis was reacting to last week's announcement by U.S. Interior Secretary Ken Salazar, a former Colorado senator, that the U.S. Bureau of Land Management (BLM) is taking a “fresh look” at oil shale leasing rules passed in the waning days of the Bush administration in 2008. 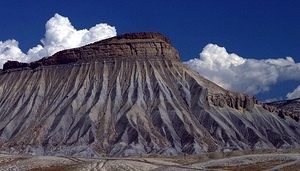 “We undoubtedly need a monumental change in what kinds of energy fuel our economy,” Polis said. “We can't afford to stay addicted to foreign oil, but we also can't afford to just replace one troubled form of energy with another. The secretary's decision to revisit the issue, and make sure our public lands and water aren't jeopardized by hasty decision making is absolutely the right move.”Polis's district, including Eagle County, is home to the upper reaches of the Colorado River, a basin that would be critical in any future commercial oil shale development. Salazar's decision was in part a settlement aimed at appeasing two 2009 lawsuits challenging the Bush rules over environmental concerns such as impacts to water resources.

“The brightest hope for America's energy independence has been shut down by an Interior Department that says it wants to review the rules for leases,” Investor's Business Daily wrote in an editorial last week. “It really wants to kill off oil altogether.”

“No matter what the price, an energy source that requires as much energy to obtain as it delivers is not a source, it's a waste of time,” Sepmeier wrote. “Oh, and did we mention the water issues? Which exceed the flows of the supplies -- the rivers -- in Colorado's oil shale country?”

Still. with crude oil prices creeping back toward $100 a barrel and unrest racking the Middle East from Egypt – where 3 million barrels of mostly U.S.-bound oil passes through the Suez Canal each day – to Bahrain, home to the U.S. Navy's 5th Fleet, it's not surprising there's renewed interest in Colorado's vast oil shale reserves.

“As we all know, the energy challenges our country faces are serious and have gone unaddressed for far too long,” U.S. Bureau of Land Management director Bob Abbey said last week, “and therefore we believe we need to responsibly develop our oil and gas supplies to help us reduce our dependence on foreign oil, but we also must do so in a thoughtful and balanced way.”

Abbey was speaking the same day the BLM filed its settlement in federal district court in Colorado promising to revisit the oil shale leasing rules passed by the Bush. Those rules opened up 2 million acres of BLM land to commercial oil shale leasing and set a royalty rate of 5 percent.

“The previous 2008 regulations made critical decisions such as royalty rate before the RD&D [research, development and demonstration] program had a chance to deliver information and answers,” Salazar said. “They put the cart before the horse, and in so doing they heightened the risk of speculation and bad decisions and yet another oil shale bust.”

Salazar was referring to “Black Sunday” on May 2, 1982, when Exxon pulled the plug on its Colony oil shale project and laid off 2,200 workers on Colorado's Western Slope. Whole towns from Parachute to Rifle virtually went bust overnight. Exxon was one of three companies selected last year by the Obama administration for a second round of RD&D leases.

It's estimated the United States holds more than half the world's oil shale reserves, with more than 2 trillion barrels of oil equivalent trapped in the shale rock between 1,000 and 2,000 feet below the surface of a 16,000-square-mile area of Colorado, Utah and Wyoming called the Green River Formation. Between 70 and 80 percent of that oil shale is beneath federal land.

Such reserves, if ever commercially tapped, would far outstrip Saudi Arabia's known reserves of 260 billion barrels and even its projected reserves, including expected new discoveries, of 900 billion barrels. However, the projected reserves may have been overstated by as much as 40 percent, according to dispatches from a top Saudi oil exploration engineer leaked by Wikileaks.

Companies for more than a century have been trying to figure out how to commercially unlock the oil from the rocks in the American West. It's a costly process that involves heating up the rocks to more than 700 degree Fahrenheit and extracting the organic kerogen. The current process consumes inordinate amounts of conventional power and already scarce western water supplies.

Shell, which has been working for years on its In situ Conversion Process at the Mahogany Research Project in Rio Blanco County, has acknowledged it currently takes at least three barrels of water for every barrel of oil produced from oil shale.

“In the last six years U.S. natural gas production has increased 20 percent,” said Randy Udall of the Association for the Study of Peak Oil & Gas – USA. “In North Dakota, the Bakken Formation is yielding 300,000 more barrels of oil today than it did five years ago. The oil and gas industry is very good at unlocking difficult oil and gas petroleum resources.

Udall points out that global oil shale production has never exceeded more than 25,000 barrels a day, largely because the process have never been proven commercially viable. Still, with conventional oil supplies locked up in politically volatile regions of the world and crude prices climbing, companies like Exxon and Shell continue to explore oil shale's vast potential.

Even Udall, an environmentalist and advocate for more sustainable energy policies, acknowledges that “the potential resource is so large – a trillion tons of these rocks – that I think it's really unreasonable to expect the nation to entirely turn its back on them.”

A Rand Corporation report on oil shale estimates it could take up to 1,200 megawatts of power to produce 100,000 barrels of oil shale oil per day. To produce 1 million barrels of oil a day – or 5 percent of current U.S. consumption -- it could take the equivalent of up to 10 new coal-fired power plants in Colorado. That has prompted oil and gas companies to explore other sources of energy to fuel production, and some politicians have even speculated that nuclear power may be the answer.

But water remains the biggest hurdle.

“From our perspective, oil is perhaps a scarce resource, but water is also pretty scarce here in the arid West, and fish and wildlife habitat and the hunting and fishing and outdoor recreation that habitat provides is a resource that has helped sustain rural communities in the West,” said Kate Zimmerman of the Rocky Mountain Regional Center of the National Wildlife Federation.

“Every drop of water Mother Nature blesses Colorado with has the potential to run out of our state,” Midcap said. “How society chooses to use that water is a really good question. The dependence on agriculture in this state is huge; we are the second largest industry in the state. We can't just keep doing more with less.”

3 Comments on "Vail-area Rep. Polis, some energy experts doubtful oil shale will ever pan out"

South Africa has been converting coal to liquid fuel since 1958. It is beyond me why we are 50+ years behind them.

One arguement placed above by a Solar Energy professor is that we simply cannot use more energy in the manufacture of energy than the amount of energy produced; this is a negative production. However, we do this very thing with corn ethanol (http://oilblog.wordpress.com/2008/06/28/corn-ethanol-good-news-or-boondogle/); we spend nearly 1.5 gallons of petroleum based fuels to create one gallon of corn ethanol.

As for the argument that water is scarce, I agree. But again, this same group of people will promote corn ethanol in exchange for diminishing farmland for the production of wheat and other consumables with no problem.

Oil shale must continue to be a considered source of energy and companies like Shell need to be supported in their efforts to find the best methods of production.

Although water use will be an important questions for oil shale, companies have the water rights they need to produce fairly large quantities of shale oil. The 1-3 barrels per barrel is a great deal smaller than the water use estimates for most forms of biofuel, and the threat to West Slope water is at least as great from Front Range communities as it is from oil and gas production.

Randy Udall's perpetual opposition to oil shale production is well known, but he brings no technical competence to his evaluation. Oil shale production is increasing again worldwide, and current plans would likely increase it by about fivefold over the next five years. It will take a long time to reach large industrial scale production, but large companies continue to invest in research and development. Oil shale is commercially viable in the three countries that now produce it.

No company currently investigating oil shale production plans to use coal-fired generating capacity for large scale production of oil shale. It is odd that the 2004 (I think) Rand Corporation report continues to be cited as the authority on oil shale production when five years of Oil Shale Symposia here in Colorado, and regularly updated Web-available DOE documents provide a much more up-to-date picture of the industry. It is sad to see such an imbalanced article presented as news.

David O. Williams is well-known for slanting all of his "news" stories against energy and resource development. So, take it all with a grain of salt.

I applaud Dr. Boak's comments above. With oil topping $100/barrel today, we need to be exploring our domestic resources. And, oil shale is a biggie (over 1 trillion barrels).

Spectacular progress has been made on oil shale technology development in recent years. While water will be used, it is not going to dry up Western Colorado by any means.

For instance, the Yampa/White Basin Roundtable of the Colorado Water Conservation Board estimates a 550,000 barrel/day industry would use about 45,000 acre-feet per year. Now, this is not a small quantity. However, this is using current technologies - that will surely improve over time. And, if we keep more of our water on the West Slope and don't export it elsewhere - and perhaps build more water storage - there is likely plenty of water in Colorado, Utah, and Wyoming for a moderately-sized industry. And, some companies say their process will use almost no water.

We need to base our policy on facts, not propaganda from people like Mr. Williams, Rep. Polis, and others.