RealAspen News and Community Content Feed
By Troy Hooper
Real Aspen – February 20, 2011
ASPEN — Forty years ago this spring, Al Gore first felt the magic of the forests around here. He had been honorably discharged from the U.S. Army and decided to motor west from his home in Tennessee.

“I put a tent in the trunk of my Chevrolet Impala and drove to the White River National Forest, no kidding, and camped there,” the former U.S. vice president told a room packed with cultural, scientific and political leaders at the Aspen Institute on Friday night. “In the following years I came back and I've been back many times since – not camping – but I have my own relationship with the forests here.”

A lot has changed since then. 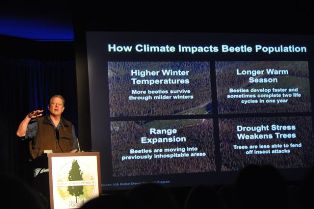 While Gore's passion for the environment helped him ascend to the highest political offices – and earned him a Nobel prize and an Oscar — the forests he loves have plunged into despair no thanks to rising temperatures, poor political will and tiny insects.

“The linkage these scientists have referred to over and over again with global warming is something some people resist but it's a fact,” Gore said. “It's unprecedented and we really have to face up to it.”

The nearly seven-hour symposium in Aspen, entitled “Forests At Risk: Climate Change & the Future of the American West”, had been billed as the first major discussion connecting global climate change to the deteriorating health of forestland in the American West.

One speaker after another explained how milder winters have allowed forest-thrashing insects to survive longer and how the extended warmer seasons have allowed the bugs to proliferate faster.

Jim Worrall, a leading authority on climate change for the Forest Service, noted that two years ago in Colorado over a half a million acres, or more than 17 percent of all aspen trees, suddenly began to die.

An extended drought that peaked in 2002 is the primary factor behind sudden aspen decline, he said.

“It was not only very dry but it was also very hot and that's a bad combination for trees,” Worrall said.

Diane Six, a University of Montana biologist, detailed how the mountain pine beetle began in British Columbia, jumped the Continental Divide and wreaked havoc on trees across the American West.

She pointed out similar trends in other parts of the world, particularly massive tree die-offs in Africa.

The effects of global warming, of course, don't begin and end with trees.

“Trees are far from the only life form giving us a clear signal,” Gore said. “Thousands of species are reacting to this new reality we have created on the planet.”

He said other indicators of our sweltering planet include the horrific floods in nations such as Australia and Brazil; devastating wildfires in Russia; a 129-degree Fahrenheit heat wave that saw Mohenjo-daro, Pakistan, break the highest recorded temperature for any city in Asia; and spring flooding in Tennessee.

“Thousands of my neighbors lost their homes and businesses and had no flood insurance because it had never flooded there,” the former Tennessee senator said of the catastrophic Nashville floods last May. “They lived so far outside the flood zone that it was considered absurd to have flood insurance. We have a tendency to confuse the unprecedented with the improbable. If something has never happened in the past, it's usually a good rule of thumb that it's not going to happen in the future. But the exceptions can kill you.”

In spite of it all, Gore remains an optimist. More and more, climate change is becoming a front-burner issue for the world's leaders and children. Future generations, he said, can reverse the planet's course.

I am always amazed at how Global Warming Activists, like Al Gore, can take nature, spin it around, turn it upside down, flash a few graphs, and convince people that they are to blame for everything under the sun.

The latest from Mr. Gore, comes in the allegation the pine beetle infestation in the US (and BC) is a result of global warming. “The linkage these scientists have referred to over and over again with global warming is something some people resist but it’s a fact,” Gore said. “It’s unprecedented and we really have to face up to it.”

Unprecedented? Does Al know there is a thing called Google which works on the internet he created? And, that if you use Google, you can find interesting things?

The following is from the BC Ministry of Environment's website: http://www.env.gov.bc.ca/bcparks/conserve/pine_beetle/pine_beetle.html

Q. Why do we have this epidemic and will the forests be destroyed?

The epidemic is largely occurring because of favourable climatic conditions and favourable stands of pine. The west-central portion of British Columbia has not had a severely cold winter for many years. Mild winters result in high survival rates of beetles and therefore population increases occur.

As well, British Columbia has abundant amounts of mature lodgepole pine forests. These forests would normally be comprised of more tree variety and a more varied composition of tree ages. However, due to many decades of forest fire suppression, the stands are very uniform in age and species resulting in an expansive landscape of prime beetle habitat.

This epidemic is not the first epidemic of mountain pine beetle in British Columbia. Its size is comparable to the epidemic of the early 1980s that occurred in the Cariboo-Chilcotin area. Epidemics also do not "destroy" the forests. True, large amounts of trees die as a result of beetles, but new growth rapidly appears below the dead stands. This is nature's way of breaking up uniform stands into ones that are more varied in composition, structure and age - a more natural forest condition.

Q. When will this epidemic end?

So it appears, contrary to Al's assertion that beetle infestation is an unnatural, unprecedented event due to man's carbon footprint, it is in fact bunk. It is a combination of man's "suppression of forest fires" over decades, altering the natural balance, along with cyclical warming trends. And what do ya know, this winter was colder, with more colder winters now projected through to 2035. Bye-bye pine beetle for the next few decades.

An interesting point though, is that the carbon output of the pine beetle infestation in BC, during its worst year, created 75% of the average annual (1959-1999) Canadian forest fire carbon footprint.( http://www.nature.com/nature/journal/v452/n7190/abs/nature06777.html ). In other words, by suppressing forest fires, we evidently have created a larger carbon footprint by contributing to "an expansive landscape of prime beetle habitat."

Scientists quite often focus their consideration of contributory elements on what will help to prove a particular argument, ignoring "trivial details" like the impact of forest fire suppression, or natural climatic cycles, on the natural landscape.

And, politicians/carbon credit investors, like Gore, make the most of these limited considerations to arrive at hairbrained allegations against humanity.

I learned in high school, garbage in = garbage out. I think Gore, et al, should perhaps be sent back to school to learn the basics of scientific investigation. The world's forests do not exist in an artificially created vacuum of a few singular elementary factors. They exist in a complex and dynamic system of ever changing and shifting patterns.

When it comes to climate science, while an understanding of the long list of contributory factors is beyond the ability of most computer programming today (as evidenced by failed modelling v results), we are only now beginning to understand the part the sun, the moon and even the stars in the universe play in this dynamic system.

The writing is already on the wall. The CO2 scare of the late 20th and early 21st centuries will be over soon, and Gore et al, will be shown to have been the equivalent of the well-meaning, but deluded, placard carrying - "The World is Coming to an End" - whackos they are.