Vail has a long history of hosting powerful political figures on skiing vacation, dating back to the 1970s when the late President Gerald R. Ford made Vail his western White House. He later became a Vail Valley fixture when he purchased a home in the nearby resort of Beaver Creek. 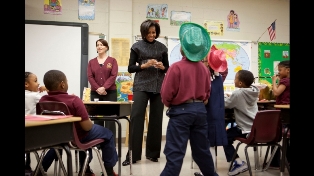 Michelle Obama in action in the classroom.
White House file photo
In the 1990s, Vail saw a series of high-profile leaders either on its slope during the winter months or for summer vacations. The late Princess Diana skied Vail in the early 1990s, setting off a skiing paparazzi frenzy, and President Bill Clinton also visited Vail during that same time period – but to play golf.

Vice President Dan Quayle learned to snowboard at Vail during the first Bush administration, and Clinton Vice President Al Gore made several trips to the Vail Valley, including to ski. Gore was in Aspen Friday evening, discussing the connection between global climate change and the mountain pine bark beetle epidemic that has killed millions of acres of pines trees in Colorado.

According to the Vail Daily, Michelle Obama took her daughters to Ski Liberty in Pennsylvania last season. That was Malia and Sasha's first ski trip. President Obama reportedly is not a skier.

I caddied for Clinton and Ford the year he came out to play golf. Funny guy, Clinton, a real blue collar American.

You have outdone yourself this time. It is probably the best, most short step by step guide that I have ever seen. 먹튀검증사이트

With the universal account number, each EPFO member can Consolidate Multiple PF accounts with UAN into one single account. That way whenever you change a job, you will be able to see your EPF transactions or passbook statement at the same place.

I went over this website and I believe you have a lot of wonderful information, saved to my bookmarks 먹튀검증커뮤니티

It is just sad the Obama's term ended and then there is trump. I am just glad now that Biden is rescuing America from doomsday. I hope that during Biden's term, he would also allow Flooring Maintenance Services from a different culture and race awareness against discrimination within working areas.

Please let me know if you’re looking for a article writer for your site. You have some really great posts and I feel I would be a good asset. If you ever want to take some of the load off, I’d absolutely love to write some material for your blog in exchange for a link back to mine. Please send me an email if interested. Thank you! สมัคร slot เครดิตฟรี แค่ยืนยันตน

This is my first time i visit here. I found such a substantial number of interesting stuff in your blog especially its examination. Really its inconceivable article. Keep it up. 메이저사이트