RealAspen News and Community Content Feed
By Real Vail
Real Aspen – February 16, 2011
Ski and Snowboard Club Vail's Will Gregorak, of Longmont, was crowned the American downhill champion at the U.S. Alpine Championships in Aspen today, although he was edged by a scant two-hundredths of a second by Canadian Dustin Cook on a wind-shortened course. 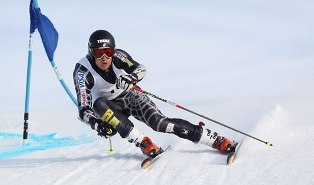 Ford, however, ran away with the women's title, .88 in front of Staples, with U.S. Development Team member Ghent .34 back in third to win the junior title. Top men's junior was Brennan Rubie, Salt Lake City, also a member of the development squad, who finished 12th.

"When we first got up there to inspect the wind was blowing really hard, so I kind of guessed that it was going to be moved down," said Ford, a three-time winner of the Eastern Ski Association's Golden Ski Award for top juniors. "If they didn't move it down, we would have went flying off the second jump."

With the long flat no longer a factor, the Aztec pitch proved to be a critical section, and on a shortened course it ran much different than Tuesday's NorAm downhill prelude, also won by Ford.

"I had a lot of confidence after yesterday. I knew what I needed to do. It was more about executing than anything else," said Ford, who leads the NorAm downhill standings over Staples.

"The more you shorten the course, the tighter it's going to be," said Gregorak, who earned his first Audi FIS Alpine World Cup start earlier this season. "We've had four runs on this course already and I've struggled on the difficult section. Finally I got it together through there and skied really well."

The NorAm Cup resumes Thursday and Aspen and continue through Feb. 18. The remaining U.S. Alpine Championship events including super G, giant slalom and slalom will be held March 31- April 3 in Crested Butte, just one weekend after the Nature Valley NASTAR National Championships.

Nice post! This is a very nice blog that I will definitively come back to more times this year! Thanks for informative post. Meme Token

Thank you so much for the post you do. I like your post and all you share with us is up to date and quite informative, i would like to bookmark the page so i can come here again to read you, as you have done a wonderful job.

I would like to say that this blog really convinced me to do it! Thanks, very good post printing services nearby.

I appreciate you taking the time to create this post. It has been really valuable to me certainly. Value it student classroom headphones.

I'm Jane. I'm a seller for kitchen Stainless steel bowls. I love skiing, especially extreme skiing, which is as challenging as my profession, but I enjoy the feeling every time, like a free bird soaring in the air. Gu Ailing is my idol. I admire her so much that I can take skiing as my career. Hope tomorrow will be better!
https://www.mixbowls.com