RealAspen News and Community Content Feed
By David O. Williams
Real Aspen – February 10, 2011
Colorado Sen. Mark Udall today, appearing on the MSNBC's Hardball show with Chris Matthews, said American political infighting should not spill over into how the United States deals with the ongoing popular uprising against the regime of Hosni Mubarak in Egypt.

Joined by Sen. Robert Casey, D-Pa., of the Senate Foreign Relations Committee, Udall was speaking ahead of an anticipated speech by Mubarak as the Egyptian military increases its role in handling the three-week-old protests that have already resulted in Mubarak saying he will not seek re-election in September. Protesters want Mubarak to step down immediately.

Mubarak later came on state television and infuriated crowds in the streets by refusing to step down despite reports earlier in the day that he was on his out. 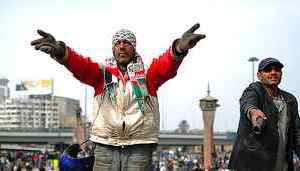 Matthews had asked Udall and Casey earlier about the American Tea Party movement, in which some of its biggest stars, Glenn Beck of FOX News and former vice presidential candidate Sarah Palin, have been highly critical of President Barack Obama's handling of the Egypt crisis. Palin has called this Obama's 3 a.m. phone call, referring to campaign ads from then presidential candidate Hilary Clinton claiming he didn't have the foreign relations experience for the job.

Beck has been railing against a caliphate sweeping the Middle East that will entrench radical Islamists in positions of power. He is particularly fearful of Egypt's Muslim Brotherhood – an 80-year-old party that has so far remained in the background of the current uprising.

Udall said what's needed in the current situation is “another Atatürk,” referring to Mustafa Kemal Atatürk – the father of modern, secular Turkey. There is a clear division among some in the Tea Party movement who fear an increasingly radicalized Middle East and its inherent threat to American capitalism and old-school conservatives in the Bush-Cheney mold, who see the current string of uprisings, from Tunisia to Egypt, as the positive and inevitable spread of Democracy

That debate should stay within American borders, Udall said, allowing that there are likely many within the Tea Party movement who support the spread of Democracy and freedom.

“Our politics ought to end on the water's edge on this,” Udall told Matthews.

Doug Lamborn, a Republican U.S. representative from Colorado's 5th Congressional District, has called on the United States to resume drilling in the Gulf of Mexico because of volatility in the Middle East.

“With the recent turmoil in Egypt, speculation has ensued over the possible shutdown of the Suez Canal which ferries through about 1.8 million barrels of oil every day. Events of recent days underscore our need to reduce our dependence on foreign oil so our economy is not dependent on volatile foreign issues,” Lamborn said in a prepared statement. “America needs American-made energy.”