Kearney missed the moguls title by four hundredths of a point. Kloser was 18th. Jennifer Heil of Canada claimed the gold.

On the men's side, Jeremy Cota (Carrabassett Valley, ME) finished fourth, just shy of the podium, as France's Guilbaut Colas took home gold. 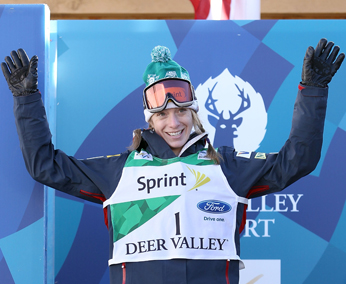 Conditions for the first day of the World Championships looked like a tourism brochure, including traditional Utah bluebird skies, but crisp, super cold air. The course at Deer Valley Resort was steep with solid hard bumps that provided a perfect platform for competitors to show off their skills.

For Kearney, Wednesday's finals race was especially close – one of the tightest margins in history. And she knew exactly where gold became silver.

"I missed the grab. My finger touched it, but I didn't grab it," she exclaimed.

That little mistake made all the difference for the judges, awarding Heil a score of 24.35 to Kearney's 24.31. Kristi Richards of Canada earned the bronze. It was Heil's fourth straight win on the Deer Valley Resort course.

"It's still a silver medal, with a mistake, which leaves room for improvement and it keeps things exciting," said an upbeat Kearney of her first loss in six consecutive individual moguls events. "A dual between the two of us [Heil] might now have more meaning!" (Dual moguls are Saturday Feb. 5 and will be the final event of the 2011 FIS World Freestyle Ski Championships)

"I was really psyched to throw the D-spin up top and push myself," said McPhie after her finals run. "I am really excited for duals on Saturday."

Wednesday's competition was one of the last for retiring Olympic gold medalist, and now 2011 World Champion, Heil. It was on this course during the 2002 Games that she burst into the international spotlight just missing a medal in fourth.

Cota, once again, just missed the podium. His fourth led a strong U.S. men's team in the finals with three in the top 10. The gold went to Colas with silver and bronze going to the Canadian duo of Alexandre Bilodeau and Mikael Kingsbury.

"I was happy with the way I skied," said Cota. "I'm excited about the way my skiing is coming. I have spent a lot of time working on my technical skiing."