DeGette, a Denver Democrat, and Polis, a Boulder Democrat whose district includes Vail, have been trying since 2009 to compel the oil and gas industry to reveal the types of chemicals used in “fracking,” a process in which water, sand and chemicals are injected under high pressure into gas wells to fracture sandstone formations and free up gas and oil. 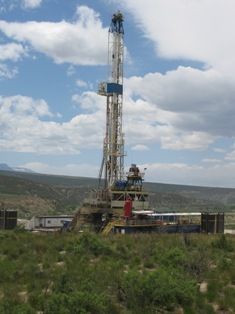 The process was exempted from the Safe Drinking Water Act under the Energy Policy Act that was passed during the Bush administration in 2005 – except in cases when diesel fuel is used. Oil and gas industry officials claim the fracking process has been used safely for decades, but conservationists and a growing number of community activists in heavily drilled areas of the country claim the process has led to groundwater contamination.

Any company using diesel fuel in frack jobs must first obtain a permit under the Safe Drinking Water Act. The EPA itself, which issued a heavily criticized 2004 report on fracking prior to its congressional exemption, singled out diesel fuel, stating “the use of diesel fuel in fracturing fluids poses the greatest threat” to underground sources of drinking water.

Diesel fuel contains toxins such as benzene, toluene, ethylbenzene, and xylenes (also known as BTEX) that the U.S. Department of Health and Human Services, the International Agency for Research on Cancer, and the EPA have determined can damage the central nervous system, liver, and kidneys over a prolonged period of time.

“Our investigation has shown that for the past several years, the fracking industry has ignored federal regulations and a mutually binding agreement, and injected over 30 million gallons of one of the most toxic chemicals into the ground, potentially contaminating drinking water aquifers in communities nationwide,” said DeGette, ranking member of the Subcommittee on Oversight and Investigations. “Today we call on the EPA to determine whether the public has been put at risk as a result of these irresponsible and possibly unlawful activities.”

DeGette again referenced the Fracturing Responsibility and Awareness of Chemicals (FRAC) Act that she first introduced with Polis in 2009. The bill has repeatedly been beaten back by the oil and gas industry and was again shot down late last session as a slew of energy bills fizzled despite public outrage over accidents such as BP's Deepwater Horizon spill in the Gulf of Mexico. The Interior Department is currently considering requiring disclosure of fracking chemicals used on all federal lands.

“This disturbing report lends urgency to passing the FRAC Act, which would have required regulation of all fracking activities under the Safe Drinking Water Act and mandated disclosure of the chemicals in fracking fluids to protect our families' water supply,” DeGette added. “For Colorado in particular, natural gas is an important economic driver. But we must ensure that this energy exploration is done safely and responsibly.”

The probe found that BJ Services used the most diesel fuel or fluids containing diesel in fracking operations, with more than 11.5 million gallons. But high-profiles Halliburton was second with 7.2 million gallons used.

“The findings of this investigation represent a major step toward transparency and public safety,” Polis said in a release. “We need to close the Halliburton loophole, and it is my hope that this will prompt further investigation and action by the EPA on violations of the Safe Drinking Water Act.”

The EPA has already launched another investigation of hydraulic fracturing, and has been conducting information meetings around the country, including one in Denver last summer.

The new congressional report singles out federal and state regulatory agencies for failing to discover the use of diesel fuel, which was expressly excluded from the Safe Drinking Water Act exemption granted in 2005.

In its letter to EPA administrator Lisa Jackson requesting an expanded investigation into the use of diesel fuel, the House committee singled out Colorado regulators:

“In some instances, the officials we contacted expressed doubt that companies still used diesel as a hydraulic fracturing fluid or additive or were unaware of continued diesel fuel use,” the committee wrote, after detailing that the oil and gas services companies admitted to using diesel fuel. “An engineer from the Colorado Oil and Gas Conservation Commission (COGCC), for example, said that diesel is ‘rarely used' and said he knew of only one time diesel fuel was used in hydraulic fracturing in Colorado.”

That excerpt stemmed from an email exchange between a COGCC engineer and the committee staff in September of last year. Officials for the COGCC, the primary state regulator of oil and gas drilling, have long maintained the FRAC Act is unnecessary because fracking is covered by state rules.

“I have called for complete industry compliance with the Safe Drinking Water Act and full meaningful public disclosure of all hydraulic fracturing fluids. I fought for this disclosure during the Senate energy debate last summer and will keep up that fight. I would also encourage the EPA to include a greater investigation of these alleged diesel violations in its upcoming study on hydraulic fracturing. Clean burning natural gas should play a significant role in our energy future; but that role should never come at the expense of public health.”

While checking college paper for sale students need to look for specific words as some essay reviews often overuse terms like me and I, which shows that they are trying to build credibility and get people to trust them. Genuine customers or users choose to favor nouns because they choose to be truthful

I am usually to blogging and i genuinely appreciate your site content. This content has really peaks my interest. I am going to bookmark your internet site and keep checking choosing info. https://mopsc.org

hey there and thank you for your information â€“ Iâ€™ve definitely picked up something new from right here. I did however expertise a few technical points using this site, since I experienced to reload the website lots of times previous to I could get it to load correctly. I had been wondering if your web host is OK? Not that I’m complaining, but slow loading instances times will very frequently affect your placement in google and could damage your high-quality score if advertising and marketing with Adwords. Anyway I am adding this RSS to my e-mail and can look out for much more of your respective exciting content. Ensure that you update this again soon.. knockoff hermes belts

You made several fine points there. I did a search on the topic and found nearly all persons will have the same opinion with your blog. ufabet เข้าสู่ระบบ

I always visit new blog everyday and i found your blog.*-”– เว็บหวย

I agree completely with what you said. Great Stuff. Keep going, guys.. 스포츠토토

Hi there, I discovered your website by way of Google while searching for a comparable topic, your website came up, it looks good. I’ve bookmarked it in my google bookmarks. Merzouga Tours

I as well as my friends have been reading through the best solutions located on your website and then at once developed an awful feeling I never thanked you for those tips. The men came so very interested to read them and have now unquestionably been having fun with those things. I appreciate you for actually being very helpful and then for obtaining variety of ideal themes millions of individuals are really wanting to discover. Our honest apologies for not saying thanks to you earlier. คาสิโน

Wow, fantastic blog layout! How lengthy have you ever been blogging for? you made running a blog look easy. The whole look of your website is wonderful, well the content material! Kennected

Hello i try to open your blog in safari and its looks funny, i tink that the problem is from your hosting ,or maybe from me but still you have a nice setup for the ads, i writing in this post because you will see it when you are validating comments, Keep up the good work Andrei from Romania NYA ZEELAND TURISTVISUM

Hello my friend! I want to say that this post is amazing, great written and include almost all important infos. I?d like to look more posts like this . شرایط ویزای هند

I precisely wished to appreciate you again. I am not sure what I would’ve worked on in the absence of those techniques provided by you concerning that industry. This has been the scary case in my opinion, but taking note of the skilled avenue you processed it took me to jump over contentment. I am happy for your advice and in addition hope you recognize what an amazing job you are always doing training people through the use of a web site. I’m certain you haven’t got to know any of us. ไพ่สามกอง ออนไลน์

Pretty nice post, thanks for the awesome article. I’m having troubles subscribing to your blogs feed. Thought I’d let you know US ULAZNA VIZA ONLINE

bad credits can happen at any point in your life so be prepared to always get some extra income, https://strongtoto.com/바카라

I appreciate you taking the time to talk about them with people. merchant services iso program

I am sure you must have enjoyed to the core writing on this topic. Nice post neurotonix reviews