A female snowboarder Saturday triggered an avalanche estimated at 800 feet wide and 1,000 feet long on Uneva Peak above the pass. She was carried the distance of the slide and partially buried in the debris field at the bottom, where she was pulled out by fellow backcountry snow riders.

The snowboarder's ankles were injured and she was unable to ride or walk out, prompting a rescue operation Saturday evening. The full press release from the Eagle County Sheriff's Office is posted below.

Colorado's backcountry snowpack is highly problematic given the consistent freeze-thaw cycle over the last several weeks, and the CAIC warns that the current storm system bringing new snow and bitter cold temperatures will only exacerbate the situation the next several days:

“The primary avalanche concern continues to be the persistent weak layers under very strong slabs,” the CAIC reports. “While not frequent, they have the potential to produce large avalanches. Today's new snow will bury another layer of surface hoar and set up future problems.” 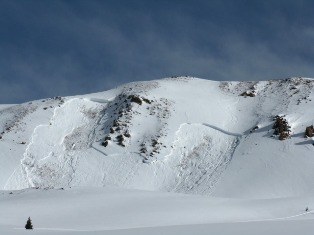 The Colorado Avalanche Information Center cautions slides like these, while not frequent, are still quite possible in Colorado's backcountry despite current moderate conditions.
CIAC

Anyone traveling in the backcountry is advised to not only bring all the proper gear but also consult the CAIC for the very latest conditions and then to use the utmost caution and all available snow safety training to make educated decisions about where or where not to ski, snowboard or snowmobile.

Also be sure to ski slopes one at a time to avoid multiple being involved in any triggered slide. That was critical in Saturday's incident not resulting more serious injury or death, according to the sheriff's office: “While riding Uneva in the snow conditions of that time was questionable, the fact that the party descended one at a time prevented this from becoming a much larger and potentially tragic incident.”

EAGLE COUNTY – Saturday afternoon and evening (January 29, 2011), rescuers pulled four snow riders from an avalanche on Uneva Peak. The four, two skiers and two snowboarders, had planned to ride the south side of Uneva Peak above the CDOT sand shed. Two of the riders made it about half way down without incident. The third, a female snowboarder, triggered an avalanche estimated to be 800 feet wide, 1,000 feet long and about four feet deep. The fourth member of the party had remained on top.

Witnesses indicate that the snowboarder was carried by the avalanche its full distance and deposited in the debris field at its base, partially buried. She was dug out by the rest of her party, but had injured both her ankles and was unable to walk or ride out.

At about 3:45 p.m. the party called 911 who advised the Eagle County Sheriff's Office and Vail Mountain Rescue (VMRG). The on-duty rescue coordinator quickly mobilized a team of 14 rescuers who moved themselves and their rescue gear to the scene of the avalanche. By 5 p.m. the first rescue team was in the field and reached the injured party about an hour later. A second team followed shortly afterwards. The injured party's friends helped guide the rescuers to their location in the gathering darkness with their headlamps.

After evaluating the injured snowboarder, VMRG contacted Tri-State Care Flight, which was unable to land due to high winds aloft. Instead the team extracted the patient and her three companions on skis, using a sled to carry the injured party. They reached the CDOT shed at about 8:30 p.m. and turned the group over to the Eagle County Ambulance District for evaluation. The injured snowboarder was transported to Vail Valley Medical Center for further evaluation and treatment.

Backcountry skiers and riders need to be aware of snow conditions, always carry a shovel, beacon and probe, as well as descend one at a time. While riding Uneva in the snow conditions of that time was questionable, the fact that the party descended one at a time prevented this from becoming a much larger and potentially tragic incident.