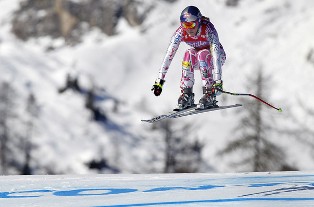 Vonn, a three-time Audi FIS Alpine World Cup overall champion, is seeking to defend the double gold she captured in downhill and super G from 2009 and contend for medals in three other events including super combined. She is currently leading the World Cup standings for downhill, super G and super combined.

"I have a lot of confidence in downhill and super G right now and am extremely excited for World Championships," said Vonn. "Garmisch is a really good hill for me and I've had a lot of success there. But the World Championships are unique, you have to be the best on race day – there aren't second chances."

For Mancuso, the event will serve as a continuation of the resurgence she started in Vancouver with a pair of silver medals to become the most successful female Olympic alpine skier in the U.S. Thus far, she has stood on the 2011 World Cup podium for super G and downhill, plus added three top 10 results in giant slalom – the discipline that brought her Olympic gold in 2006

"These are races where they don't have to focus on World Cup points or improving their start position," said women's Head Coach Alex Hoedlmoser. "It's going to be all out and we've seen that all these girls can be wicked fast."

Miller will seek to put down medal inspiring runs similar to those that produced a full spectrum of medals in Vancouver and made him a four-time World Champion and two-time World Cup overall champion. He enters the championships having recently landed his sixth podium finish at the Hahnenkamm races in Kitzbuehel, Austria with a downhill second.

"At big races like Kitzbuehel and the World Championships, there's definitely more motivation," said Miller. "Success in these events comes down to having experience in big race situations and being able to successfully manage the amount of risk you need to take in order to win."

"This team is full of energy and full of heart. We saw at the Olympics that this group can ski with intensity and passion and that's exactly the same approach we're taking to the World Championships," said men's Head Coach Sasha Rearick. "We are going to be thin on the speed side with so many guys on the injured reserve list right now. But in all events we'll be strong."

The women's Team will host an opening press conference in coordination with European Training Base partner Zell am See-Kaprun, Austria on Monday, Feb. 7 with the men's to follow on Tuesday, Feb. 8.

U.S. Ski Team athletes have garnered 65 World Championship medals dating back to 1948. The event will return to America for the first time since 1999 when Vail and Beaver Creek, CO host in 2015.