RealAspen News and Community Content Feed
By David O. Williams
Real Aspen – January 24, 2011
Population growth on Colorado's Front Range and Western Slope, coupled with rising demand for energy production, will have the state in dire need of more water by the year 2050, according to a new report by the Statewide Water Supply Initiative.

Colorado will need up to 1 million more acre-feet of water than it currently uses if, as projected by the report, the state's population balloons to 10 million by 2050. The fastest areas of growth will be on Colorado's Western Slope, where the prospect of increased traditional energy production – as well as a speculative oil shale boom – looms large in any water discussion.

The Grand Junction Daily Sentinel reports the state's demands for municipal and industrial water “could exceed supply by as much as 630,000 acre-feet by mid-century,” according to the report released Friday. 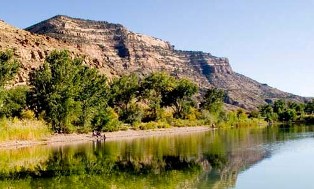 Oil shale production, seen as a potentially huge source of domestic oil, involves heating shale rock and sand and extracting organic kerogen, which can be converted into conventional oil. It is a speculative process still very much in the research and development stage and uses large amounts of water. The exact amount varies depending on the technology.

The federal government has called for a great deal more study of the oil shale industry to determine its potential impacts on the state's water supply before the process ever enters into full commercial production.

Numerous studies and reports have indicated the Colorado River is one of the most endangered basins in the nation because of the growing pressures from down-river residential growth and surging energy production ranging from natural gas drilling to uranium mining.

Agricultural and recreational water users are increasingly concerned about the impacts of residential and industrial water consumption, particularly on the Western Slope.

According to the Sentinel, the new report calls “for the Colorado Water Conservation Board to determine ‘the right mix of strategies,' such as conservation reuse, agricultural transfers and development of new water supplies to fill the gap between supplies and municipal and industrial needs.”

Meanwhile, as the debate over health issues related to natural gas drilling and a process called hydraulic fracturing has heated up in Garfield County in recent weeks, KJCT News 8 in Grand Junction today is reporting an early morning fire at a Williams' well eight miles south of Rifle.

The fire was reportedly put out in about an hour and half, with minimal damage and no injuries, but the incident is sure to prompt even more calls for tighter local regulation of the oil and gas industry. Williams is the most active drilling company in Garfield County, which is just west of Eagle County saw the second most drilling permits issued in the state in 2010.

Denver-based Antero is seeking state permission to increase well density in two subdivisions near Silt, and is also negotiating a 200-well project in the retirement community of Battlement Mesa, where some residents are worried about toxic fumes and potential accidents. Garfield County officials recently criticized state drilling regulations as being insufficient to properly ensure public safety and health. The industry is legally challenging the state's current regulations.

Hydraulic fracturing, or fracking, is the commonly used process of injecting water, sand and undisclosed chemicals under very high pressure deep into gas wells to crack open sandstone and free up more gas. There is a national push to require disclosure of chemical formulas, which oil and gas companies claim are proprietary.

“Williams spokeswoman Susan Alvillar says smaller fires associated with [fracking] are not uncommon. She explained that after wells are drilled, sand and water are pushed into the well to help release natural gas from deep inside the ground.

“In order to allow the natural gas to reach the surface, the sand and water are removed, and the water is pumped into several tanks. The water can contain flammable hydrocarbons. She says these flammable materials can lead to fires, but that crews are trained to either put them out themselves or let them burn out on their own. She says the fire departments are often called to the scene as a backup measure.”