With national economic optimism surging, hope in Colorado's high country – and to some degree the state's overall economy – has been literally falling from the heavens.

The ski industry lobbying group Colorado Ski Country USA (CSCUSA) recently reported its 22 member resorts saw a 10 percent increase in skier visits for the first part of the ski season (October to the end of December), largely because of abundant early snowfall. 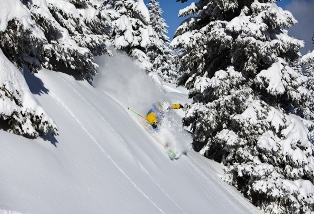 Chris Ewart at Vail on Tuesday.
By Patrick Orton/Vail Resorts

“Consistent snow and reliable conditions contributed to a very positive start to the season,” CSCUSA president and CEO Melanie Mills said in a release. “There is a lot of ski season left, but we've set a good pace, have great snow conditions and hope the momentum continues.”

The success of the state's multi-billion-dollar ski and winter tourism industry is tied directly to the amount of snowfall and public perception in key domestic destination markets such as New York, Texas and Illinois, as well as overseas markets in Europe and Latin America.

The 10-percent statewide increase also tracks with Vail Resorts, the state's largest ski company and owner of Vail, Beaver Creek, Breckenridge and Keystone. Those resorts are not members of CSCUSA, but earlier this month reported a similar 10-percent jump in business.

Vail Resorts CEO Rob Katz said in a news release that not only are skier visits up, but people are spending more once they get to Colorado.

“Importantly, we observed strong ancillary spending, yielding gains in all categories that outpaced lift ticket revenue growth and marked a continuation of the improving consumer spending trends we first reported in the spring of 2010,” Katz said in a release.

International destinations like Vail and Aspen have seen sustained business from traditional markets like Mexico and South America, and European visitation has been solid as well – particularly among Russian snow riders.

Long-range weather forecasts are calling for continued above-average snowfall throughout January. Vail has had almost three feet of new snow since Martin Luther King Day, and Breckenridge -- in Summit County – has had well over three feet of new snow, with 26 inches reported on Tuesday alone.

Natural snow fell in abundance during rush hour Wednesday in Denver, but event organizers still cranked up snow guns in downtown Denver as the massive SnowSports Industries America Snow Show kicks off next week in the Denver Convention Center.

You made some decent points there. I looked on-line for your issue and found most people should go coupled with together with your internet site. https://strongtoto.com/토토분석

I needed to write you that little bit of remark to help give many thanks once again with your striking solutions you’ve featured on this website. It was certainly extremely open-handed of you to grant publicly what exactly most people would have made available as an e-book to generate some profit for themselves, specifically seeing that you could have done it if you considered necessary. Those solutions in addition acted like a fantastic way to realize that some people have similar interest similar to mine to know good deal more related to this condition. I am certain there are some more enjoyable moments ahead for individuals who scan through your site. navigate to the closest grocery store

I really appreciate the kind of topics you post here. Thanks for sharing us a great information that is actually helpful. Good day! kanye wallpaper iphone

Hello! I would like to provide a enormous thumbs up for your fantastic information you’ve got here about this post. I will be coming back to your website to get more detailed soon. 출장마사지

Such sites are important because they provide a large dose of useful information ... 먹튀검증

So, basically, nowadays people are more dependent on online products and services that’s why we also, take forward a step to help you. fifa world cup 2022 date

This is helpful, nonetheless it can be crucial so that you can check out the following website: 링크찾기

I don’t unremarkably comment but I gotta admit thankyou for the post on this one : D. CHECK ME OUT BY CLICKING MY NAME!!! prodentim

Emotional attention, self-control, approval, adhere to, patience but also security. These are typically among the issues that Tang Soo Can do, most of the Thai martial art attached to self defense purposes, can show buyers plus instilling in your soul the means not just to maintain with your own eyes on the competency on the very first real danger stains to cure confrontation all in all. 먹튀인증