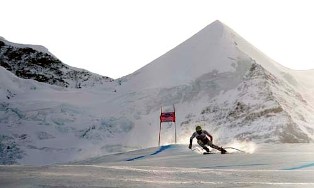 "There's a book in the other room," he points. "I look at it every time I come here. The photographs in there, well, they really tell the story. Wengen is a special place."

The Wengernalpbahn, a cog rail completed in 1892, serves as taxi to the auto-free Swiss village. It continues onto Kleine Scheidegg and over a pass to Grindelwald. Three of the most ominous peaks in Switzerland - the Jungfrau, Monch and Eiger - tower above.

It will be Nyman's sixth year of racing the Lauberhorn downhill, the oldest downhill in ski racing.

The same cog rail that drops the entire Audi FIS Alpine World Cup field and the thousands of skis and tons of luggage in Wengen also serves as the first chair lift. Special trains are added to the meticulous Swiss schedule on race day. Athletes exit at Kleine Sheidegg and load a lift to the start, 2.7 miles above the finish.

With average times of 2:30 seconds, the Lauberhorn is also the longest race on the World Cup circuit. The Swiss Air Force flies F5 Tiger fighters in acrobatic formation at noon each day.

"The first time I raced her, I could feel my legs burning halfway down," said Nyman. "Now I feel them at about three quarters. This hill takes it all out of you. You have to fight the urge to stand up and if you win that fight, you'll be in a good position to win the race."

The Wengen finish is tucked into a farm pasture just outside the village. It's small with room enough in the stands for a few thousand. In big years 30,000 have been known to flank the Lauberhorn from top to bottom with the highest concentration packed below the famous Hundschopf, a 130 foot leap through an rock outcropping.

Beyond that is Canadian Corner, a long fall-away curve named after the Crazy Canucks, who dominated Wengen in the early 1980's. Following the harrowing turn is the Kernen-S, a near 90 degree jog onto a tight ribbon of snow before peeling left into another 90. The hill then drops through the Wasserstation, a tunnel under the Wengernalpbahn. At times the train passes as racers rip below - all this in the first half of the run.

In the lower segement, skiers reach nearly 100 mph down the Haneggschuss, then soar off the Silberhornsprung and immediately into the Austrian Hole, a near two G compression. At this point, racers have been skiing for roughly 2:20. Above the finish is the Ziel-S or what U.S. coaches call stump alley.

"The three turns above the finish are probably the hardest on the slope, not because they're particularly technical, but because you're so cooked by that point. It's not easy to be dynamic on your skis and a lot of guys 'stump out' there because of fatigue. I've been one of them," said Nyman.

A top three finish is rewarded with a helicopter ride up the vertical face of the Eiger. It then swoops back and tracks up the Lauberhorn before plunging over the summit and down into town.

"I don't like to come all the way back from the finish, I like taking the helicopter," said Miller during Thursday night's super combined bib draw. "That's why it's really important to get on the podium here."

Welcome to the 81st running of the Lauberhorn races in Wengen.

This is a great way to gauge the entry accuracy of the rifle you are considering buying, before you purchase it. guns for sale online

I have not checked in here for a while as I thought it was getting boring, but the last several posts are good quality so I guess I will add you back to my everyday bloglist. You deserve it my friend https://strongtoto.com/스포츠중계

Hey! This is my first visit to your blog! We are a team of volunteers and starting a new initiative in a community in the same niche. Your blog provided us valuable information to work on. You have done a outstanding job! navigate to the closest grocery store

Quickly our own web site will, no doubt definitely turn into well regarded together with practically all running any website family members, due to its careful content and evaluate posts. y2mate com download video

The look favorably fantastic. Many of these small data tend to be designed making use of lots of background encounter. I'd like everything considerably. 우리카지노쿠폰

In this case you will begin it is important, it again produces a web site a strong significant internet site: 먹튀검증

So, basically, nowadays people are more dependent on online products and services that’s why we also, take forward a step to help you. fifa world cup 2022 date

Welcome to the party of my life here you will learn everything about me. 링크찾기