"It's nice to have this kind of support from the home crowd," said a beaming Ligety, marking his third podium at Beaver Creek in the last five years. "I've been close a lot of years and it feels awesome to finally get it."

With family, friends and two busloads of young racers from the Park City Ski Team in the stands, Ligety produced an incredible first run, putting him .36 ahead of the field. Americans Bode Miller (Franconia, N.H.), Warner Nickerson (Gilford, N.H.) and Tim Jitloff (Reno, Nev.) also made the second run with Jitloff finishing 23rd, Nickerson 24th and Miller 27th after losing all his speed in a patch of soft snow at the top of the course.

"Conditions are the best I've ever seen at Beaver Creek, hands down," said Jitloff. "I feel really comfortable here. I think we're getting around to having five guys that are consistent in the world cup. A lot of credit goes to our coaching staff and they way we've prepared."

Just minutes before the second run, Ligety was cheered on by teammate Lindsey Vonn, of Vail, in an impromptu phone interview with Beaver Creek race announcer and World Championships downhill medalist Doug Lewis over the Red Tail stadium speakers. 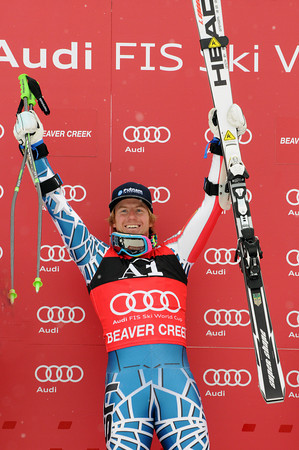 "Ligety is a racehorse, he's knows what to do," said Vonn, who won the super G in Lake Louise earlier in the day. "He's going to attack like he knows how and I'm sure he's going to pull through."

It was the first time since 2006 where two Americans won on the same day. Julia Mancuso (Squaw Valley, Calif.) added to the U.S. success finishing third in Lake Louise for her first super G podium in Lake Louise.

"I've never won a race after winning the first run," said Ligety. "I asked Aksel [Lund Svindal] at the top how to ski the second run with the lead and he said, 'just ski.' It sounds pretty simple, but it was some of the best advice I've ever had."

Ligety then set an early tone, immediately taking a deep line, building speed directly from the start. With aggressive skiing, he continued to build on his lead – the volume of the crowd increasing with every interval. As the finish neared, the crowd erupted as Ligety crossed the line for the commanding win.

"I knew I couldn't let off in the second run today because those guys are chasing me down and it's tough conditions today," explained Ligety. "I just took a lot of risk and it paid off. I've never won this early in the season or on home surface, so it's really a great day."

Miller started off strong before coming to near a stop at the top, then continued to race, waving to the fans as he crossed the line.

"It's always disappointing when you tank out of races but this hill is pretty unforgiving," said Miller, who will train for a day in Vail before traveling to Val d'Isere for the next stop on the Audi FIS Alpine World Cup tour.

Vonn picks up first win of the season

"Today I dropped the hammer a little bit more and believed in myself," said Vonn, who barely escaped a near-crash on Saturday. "For me the bottom line is never giving up."

Vonn (1:20.72) crushed the field by nearly a second, just under an hour before teammate and fellow Olympic gold medalist Ted Ligety (Park City, UT) won the Audi Birds of Prey giant slalom in Beaver Creek. It was the first time since 2006 that two Americans won World Cup races on the same day.

"I was really happy with my run today, I wanted to end the weekend on a positive note and really take advantage of the opportunity," said Vonn during a live call broadcast over the stadium speakers between giant slalom runs in Beaver Creek. "I skied with aggression and passion and had a great inspection and really nailed the line. I'm extremely happy with the win."

Sunday's win marked Vonn's 14th podium and eighth win in Lake Louise over the course of six years. It was second podium finish in Lake Louise for Mancuso, who stamped an exclaimation mark on the incredible skiing she produced throughout the week.

"I just went out of the gate charging. I was psyched to be on the podium," said Mancuso. "It's nice to have been skiing really well and consistent in the downhill, so to finish it off with a third place and my best super G result there is refreshing. I'm excited and I think it will just get better through the season."

The next stop on the Audi FIS Alpine World Cup tour is St. Moritz, Switzerland Dec. 9-12.

No more s***. All posts of this qaulity from now on lifeguard training

Admiring the time and effort you put into your website and in depth information you present. It’s good to come across a blog every once in a while that isn’t the same old rehashed information. Wonderful read! I’ve bookmarked your site and I’m adding your RSS feeds to my Google account. the atelier price