More than 42 percent of the voters in her mostly rural district stretching from Glenwood Springs in the north to Gunnison in the south are registered as unaffiliated. Thirty-one percent are Democrats and just over 25 percent are Republicans in a district that includes all or parts of Garfield, Eagle, Hinsdale, Pitkin and Gunnison counties. 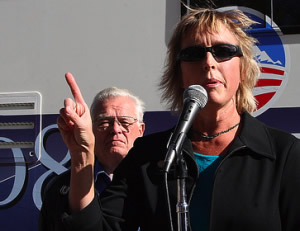 Curry changed her party affiliation from Democrat to unaffiliated late last year – just before the last legislative session – because of her disagreement with Democrats over fiscal issues and the amended oil and gas drilling regulations approved by lawmakers in 2009.

After losing a federal lawsuit against the Colorado Secretary of State to get listed on November's ballot as an independent candidate, Curry now faces the daunting task of convincing HD 61 voters to write her name on the ballot and pick her for a fourth term.

Political newcomers Luke Korkowski, a Crested Butte Republican, and Roger Wilson, a Glenwood Springs Democrat, will have their names listed on the ballot.

A needed development or a wild experiment

Curry is confident she can get independent-minded Western Slope voters to write her in come November, even though, as far as she knows, no one has successfully won a write-in campaign for a state House seat.

“In my district over 40 percent of the voters are unaffiliated,” Curry said. “One of my goals is to show people that they can do this, that they can succeed, that they don't have to have the party machine behind them to be a representative of the public.”

Curry said other lawmakers told her doing the most recent session that if she succeeded, they might follow suit.

“Since it hasn't been done, a lot of people are wondering if it's possible, and if anyone can do it, it would be me,” she said. “So I'm going to show that it's possible to do, and then I think it's definitely going to create a domino effect.”

Curry said several independent lawmakers in the state House would give voice to unaffiliated voters disaffected with the Democratic and Republican parties. It would be more difficult for the majority party to kill bills sponsored by independents or to keep them off key committees.

“What she has said in terms of, ‘Gee, there's a lot of independents and therefore I want to be an independent,” I've got news for you, there's no such things as the independent party,” said Wilson, who jumped into the race because he felt Democrats could not risk losing the seat and the ability to continue the party's agenda.

“As a write-in, it's a wild experiment to expect that she could win, and it's very important the values that I'm trying to represent are represented,” Wilson said.

Wilson says he's running because he thinks he knows what the district's constituents want and what they don't want and that he can work with the support of the party to advance those aims.

“I have an agenda that is consistent with what Western Slope values are of everyday people and working with the environment. I don't' want bloated government, I want good government, and as a Democrat working with others I can achieve that.”

“The extreme agenda that Luke has is not going to work in anyone's interest,” Wilson said. “Some people think no government is a good thing, and that's pretty close to what you would do if you cut taxes completely out. You'd be abandoning government, you wouldn't be fixing it or making it better, and that's what I'm running against.”

Korkowski says his campaign is all about creating jobs, fostering economic recovery and cutting government spending. The best way to do that, he says, is working within the party system and trying to wield the maximum influence in the legislature – a virtual impossibility for an independent lawmaker.

“If I want to represent my district best, then I want to have the most influence possible at the state House. That's why I made the decision to be in a political party,” said Korkowski, who in the past has been registered as an unaffiliated voter. “You saw it with Kathleen. She was stripped of speaker pro tempore and for chairmanship of the [agriculture] committee and she's got no chance of getting that back, so she's lost her influence in that respect.”

Disaffection with your party of choice, Korkowski says, can be fixed by changing the system from within.

“There are real possibilities for changing how the party system works, but regardless of what your beef is with the parties you can resolve it by showing up and getting other people like you to show up,” said Korkowski, who was unopposed at his party's assembly in May.

Newcomers disenfranchised by entrenched Republicans showed up in droves and had a major impact by picking political outsiders like Dan Maes over establishment candidates like Scott McInnis in the governor's race, he said.

“It requires persuasion,” he said of affecting change from within. “That is difficult in our day and age. We've gotten to the point of shouting at each other. I've literally had people in my face yelling at me for having the audacity to run for office, and they're not necessarily Democrats who are doing it.”

“The two-party system is here to stay, I get that,” Curry said. “But what we can do is start to rattle the cage a little bit and have a little bit less of the majority ramming through an agenda mentality and more respect for the other side's voice. The minority position has been irrelevant for years, regardless of who's in the majority. That's just how the game is played.”

This is a good initiative by the community to start such a site. It will be very useful for the members as well as the alumni to use them in their publications and emails. Thanks for providing them for free of cost. CBD Edibles