Wildlife officials say to give massive ruminants 'plenty of space' 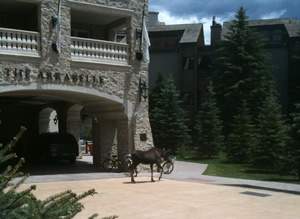 A moose wanders past the Arrabelle Hotel in Lionshead earlier this week.

A moose sighting on Vail Mountain July 3 delayed the start of the annual Vail Hill Climb running race; a moose got trapped in the back yard of Vail home in 2008 and had to be tranquilized and relocated; and earlier this week a moose was spotted strolling past the main entrance of the posh Arrabelle Hotel in Vail's Lionshead neighborhood.

That hotel, coincidentally, is home to Blue Moose pizza, which features a life-sized blue statue of a moose.

All of this moose activity - not all that unusual for the Vail Valley in recent years, according to Colorado Division of Wildlife (CDOW) spokesman Randy Hampton – prompted the town of Vail to issue a moose alert educating residents and visitors on how to respond in the event of a moose encounter.

“Give them space,” Hampton said. “They seem docile, unafraid, slow - physically and mentally - but they get a lot meaner, more aggressive and quick when they knock you down and start stomping on you. The moose and the people will be fine if everybody uses some common sense.”

Moose don't have any natural enemies in Colorado, so they don't fear people and are generally fairly curious - if enormous - animals. But a cow moose is very protective of its calves and can become extremely aggressive, and bulls get petty rowdy during the fall rut, or breeding season.

CDOW advises you not to run away if threatened by a moose - except to find cover behind a tree, boulder or vehicle – stay calm, make your presence known and slowly back off in the direction you came from. 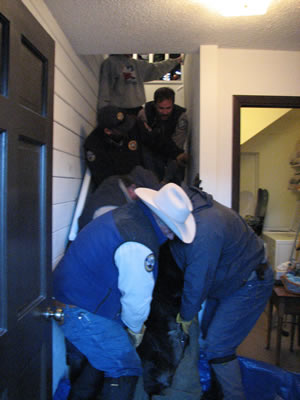 Wildlife officers lug a tranquilized moose through a condo in Vail in 2008.
Colorado Division of Wildlife

Moose have been known to tree people who get too close for photographs, and they can become quite agitated around unleashed dogs that threaten them.

“Aspen is also seeing more and more moose,” Hampton said. “We've had a few fly fishermen run off the Fryingpan and Roaring Fork [rivers] in the past two or three years. The Aspen moose are mostly out of the Grand Mesa population.”

The world's largest flat-top mountain, just east of Grand Junction, Grand Mesa is home to the state's newest moose population. CDOW and the U.S. Forest Service is hosting Grand Mesa Moose Day there on Saturday, July 31, to educate the public about moose behavior.

Moose in the Vail area generally come from the Middle Park area near Kremmling after having migrated down from North Park, where moose were first reintroduced to the state in 1978. In January, moose were reintroduced into the Flattops Wilderness Area just to the west of the Vail Valley, bringing the total number of moose herds in the state to six.

Hampton said the animals are doing very well in the state and that eventually all the herds will blend together into one big moose population.