She and her teammates come here every year but never reach the podium. Kristina Koznick was the last American to do it when she won the bronze in slalom at the Aspen Winternational held in 2004. The last American woman to win gold on Aspen Mountain was Tamara McKinney in giant slalom in 1981.

“It's just a hard hill you know. For me I feel like no matter how many times I ski on it, it's always just as challenging as the last time,” she told Real Vail's sister site, Real Aspen, on Sunday after coming up short in the slalom. “It's a hill that never quits. You have to attack it from top to bottom. For me slalom and giant slalom are my weakest events, so I wasn't coming here trying to win. It's the nature of the beast. This hill is tough.” 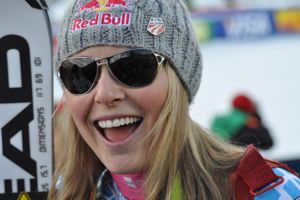 Vail's Lindsey Vonn at Aspen on Sunday.
By Troy Hooper

Even so, Vonn, a Ski and Snowboard Club Vail product and defending three-time overall World Cup champion, finished eighth and scored some points in the overall FIS World Cup standings. That's better than she can say about Saturday when she skied off course and failed to reach the final in the giant slalom -- her weakest event.

“I'm really happy with today,” she said. “You know it was pretty disappointing yesterday. I just wanted to come out and have two solid runs. Yesterday I was expecting too much. I was too excited. And I just tried to go too aggressive. Today I finally just relaxed and had two solid runs. It may not have been the fastest skiing that I've ever done but I'm in the top 10. It's really good points so I'm really happy.”

Vail's Sarah Schleper, 18th Saturday, didn't qualify for a second run in the slalom on Sunday.

The Europeans continued their domination in Aspen — a phenomenon that Vonn attributes to the low expectations and anonymity that several of the women World Cup winners in Aspen seem to share.

“There are different faces you see coming to the podium in Aspen. It's great to see the new faces. … It's good for the sport. The Euros come here with no pressure and they just attack and have good results.”

Maria Pietilae-Holmner of Sweden distanced herself from the competition with a combined time of 1:46:19. Current overall World Cup leader Maria Riesch of Germany secured silver. Tanja Poutiainen of Finland procured the bronze.

Vonn thanked all of the fans that came to Aspen to support her and her teammates.

“It was a really great crowd and great race. Unfortunately we didn't finally get a win here but there's always hope for next year.”

Resi Stiegler, of Jackson Hole, Wyo., who missed much of the last three seasons with a string of injuries, proved to fans and herself that she can still charge.

"I've tried the last three years to be in Aspen and I finally made it!" said Stiegler, who earned some World Cup points by finishing 25th. "I love Aspen, it's one of my favorite hills. It's like being home. Today is the most racing I've done in three years. It's time to just start racing."

Stiegler looked strong on the top and was ahead of the pace, before losing some time on the tricky lower section. However, she was all smiles in the finish, raising her poles to the roar of the Aspen crowd.

"I was pretty tired after the first run so I was a little worried that I was going to be that tired on the bottom but it wasn't as bad as the first run. It's been a long long road to get back to this point, but wow does it feel good to be here," said Stiegler.

Following Sunday's race the women's U.S. Ski Team will be splitting up with the speed group heading to Lake Louise for the first speed races of the season, while the technical team heads to Loveland for the opening women's NorAm races.

"I'm just going to get the ball really rolling in Lake Louise and get some confidence for the rest of the season," said Vonn, who has won five consecutive downhill races in Lake Louise. "I feel really comfortable on that hill. It was where I won my first World Cup and I've consistently had success there ever since."

"It is nice to finally get a race under my belt," said Ligety, who was sitting second in the season opening giant slalom before the race was called due to fog. "I felt like I skied well but just didn't have the speed. For the whole U.S. team in general, it's been a lack of volume. Normally we get the bulk of our speed training in Chile and this year we didn't have the opportunity and then we went to New Zealand and had bad weather."

With a consistent track and clear weather, Miller posted another solid finish, just over a half a second behind Gruenenfelder. Rounding out the podium was Switzerland's Carlo Janka and Austria's Romed Baumann in a race decided by a mere .07 seconds.

For Ganong, who captured both the U.S. downhill and super G title last season, it was all about pushing out the noise to find focus.

"Marco [Sullivan, Squaw Valley, Calif.] radioed up saying it was in good shape and that was just perfect," said Ganong, who climbed 26 spots in the race. "I changed my game plan to charge all the way, and it worked. In the start I was like, calm down, look at this view and let's just have fun. That put me in a peaceful content light. Maybe that's the new thing."

Following Sunday's race the men will head to Beaver Creek for the Audi Birds of Prey World Cup Dec. 3-5. With weather reports pointing to snow throughout the week, organizers have bumped the first downhill training run to Tuesday in order to maximize training opportunities. The Birds of Prey downhill, where Miller and other Americans have had great success, is scheduled for Friday.

"We're looking forward to getting back to Beaver Creek -- our home," said U.S. men's Sasha Rearick. "It's a hill we know how to charge."

Interesting post. I Have Been wondering about this issue, so thanks for posting. Pretty cool post.It 's really very nice and Useful post.Thanks pittsburgh seo

I am unable to read articles online very often, but I’m glad I did today. This is very well written and your points are well-expressed. Please, don’t ever stop writing. https://pittsburghseoservices.com/

Good job right here. I actually enjoyed what you had to say. Keep going because you definitely bring a new voice to this topic. Not many people would say what youve said and still make it interesting. Well, at least Im interested. Cant wait to see far more of this from you. 500 litre water tank

Nice information, valuable and excellent design, as share good stuff with good ideas and concepts, lots of great information and inspiration, both of which I need, thanks to offer such a helpful information here. 안전놀이터

An angel number 1018 meaning represents a new beginning, the power of motivation, drive, and determination. Because the number is made up of one and eight, ... https://www.simplybuzzes.com/angel-number-1018-meaning/

Wow, incredible blog layout! How long have you been blogging for? you made blogging look easy. The overall look of your web site is great, let alone the content! 카지노

After i obtained on your blog although placing interest merely slightly little bit submits. Enjoyable technique for long term, I'll be book-marking at any given time obtain types complete comes upward. 우리카지노

There is noticeably a lot of money to understand this. I assume you made certain nice points in functions also. 꽁머니커뮤니티

This website is actually a walk-through you discover the knowledge you desired relating to this and didn’t know who to inquire about. Glimpse here, and you’ll definitely discover it. olympus88

Greetings! This is my first comment here so I just wanted to give a quick shout out and tell you I genuinely enjoy reading through your blog posts. Can you recommend any other blogs/websites/forums that deal with the same topics? Thank you so much! Buy Ambien Online USA

I really like your take on the issue. I now have a clear idea on what this matter is all about.. raja gacor

Nevertheless this is besides that an incredible share that marilyn and i certainly appreciated checking. It certainly is not day to day that i maintain the prospect to decide 1. 링크모음

One other important area is that if you are a senior citizen, travel insurance regarding pensioners is something you ought to really contemplate. The old you are, greater at risk you are for allowing something awful happen to you while in foreign countries. If you are not covered by many comprehensive insurance, you could have a number of serious challenges. Thanks for expressing your hints on this website. 링크사이트

I am glad that I noticed this website, just the right info that I was searching for! slot online

Websites we think you should visit… [...]although websites we backlink to below are considerably not related to ours, we feel they are actually worth a go through, so have a look[...]…… 안전놀이터