RealAspen News and Community Content Feed
By David O. Williams
Real Aspen – November 15, 2010
A former bank teller robbed at gunpoint by a pair of Australian snowboarders here five years ago told Real Vail she feels violated all over again by a book written by one of the so-called “Dumb and Dumber” bank robbers.

“It made me feel incredibly violated and disrespected,” Jessica Gunther said of Anthony Prince's new book, Bank Robbery for Beginners. “I feel almost like I did the day it happened … as if my own progress has been undone.”

The robbery instantly became a global punch line as Prince and accomplice Luke Carroll, on a working ski holiday in Vail, decided to cap it off by robbing the WestStar Bank in Vail Village. They escaped with $132,000 in cash via chairlift on their snowboards, but left a trail of clues so extensive that police identified them within eight minutes.

Prince and Carroll were later captured at Denver International Airport after tipping a cabdriver $20,000, posing for photos holding up bundles of cash and buying one-way tickets to Mexico. They each spent more than four and half years in federal prison.

“As soon as I saw Jessica, the bank teller … saw her face melt into this horrified shock [during the robbery], that's what brought home to me that this wasn't a joke, that there's gonna be a huge ripple effect on many people,” Prince said in a television interview (see video below).

His Australian literary agent did not return an email requesting an interview with Prince. 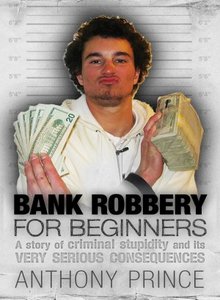 Because Prince seemed sincere in his regret, and because she felt genuinely sorry for how much he had to pay for one youthful mistake, Gunther said she reached out to Prince and conveyed her forgiveness when he was released from prison last year. Now she says that sense of closure has been shattered.“For him to publish such personal details about my horrifying experience in his words — without any warning or my permission — and to share it with the world, is a huge slap in the face for someone who reached out to him and stood up for him,” Gunther said.

She left Vail in 2007, got out of banking and returned to her home state to earn her master's degree. Having accomplished that last summer, Gunther said she is now “underemployed,” which colors how she feels about Prince continuing to further his dubious global celebrity and possibly profit from the book.

“If he could make money off of his crimes, I think that's pretty disgusting,” Gunther said on a YouTube video she posted to express her feelings about the book (see below). “You can imagine my concern about Anthony's profits when I look at my own situation and [the other teller's] and how all of this has been handled.”

Gunther said the other teller suffered lasting injuries when she was pushed down during the robbery. She added neither of the tellers had any idea Carroll and Prince were only brandishing BB guns.

Gunther had been working in banks since she was 17 but in eight years had never been robbed until that day in 2005. It was “far worse than anything I ever imagined. I can't even describe the physical manifestations of the fear on my body. I just hope it is something I never have to experience again.”

Gunther said the book's co-author contacted her recently to say “Prince would be using the money to help pay his parents back for what all of this cost them.”

So-called “Son of Sam” laws in 40 U.S. states, including Colorado, prohibit convicted felons from profiting from their crimes in book or movie deals. The laws are named after David Berkowitz, New York City's “Son of Sam” serial killer in the 1970s. Australian publisher Rupert Murdoch's sensational coverage of the crimes in the New York Post helped save that paper from bankruptcy.

A publicist for Prince's publisher, Pan Macmillan Australia, did not return an email requesting comment.

Prince, who is 25 and living in Byron Bay, New South Wales, is finishing up a business degree, according to his publishers. He said he was forced to join white supremacist gangs inside federal prison in order to stay alive.

“There's a huge amount of racial segregation and prison politics and gang mentality,” Prince said in a TV interview. “You just need to do what you need to do to survive.”

Sharing just about anything on Facebook nowadays seems like second nature to many. One group of young bank robbers shared their exploits on Facebook. This revealing, however, led to them all being arrested. Police officers checked Facebook after an unknown tip alerted them to the appearance of the postings. The proof is here: Facebook posts lead to bank robbery arrests

It's been greatly noted that a team-based job has a lot of benefits, these include camaraderie, enjoyment from others’ successes, joint decision making at scholarship essay writing service involving problem-solving and overcoming obstacles, an increased performance due to goal setting and support from others.

I really love the way you discuss this kind of topic.;-’:’ North American Bancard Agent Program

This is a splendid post. Thanks a lot for spending some time to describe this all out for all of us. It truly is a great guide! เว็บ สล็อต ตรง จาก ต่าง ประเทศ

Greetings! I’ve been reading your weblog for a while now and finally got the bravery to go ahead and give you a shout out from Lubbock Texas! Just wanted to mention keep up the good job! ufabet เข้าสู่ระบบ

The article looks magnificent, but it would be beneficial if you can share more about the suchlike subjects in the future. Keep posting. 안전놀이터

Hello there, I discovered your website via Google whilst searching for a related topic, your web site came up, it seems good. I have bookmarked it in my google bookmarks. 승무패사이트

I went over this website and I think you have a lot of superb information, bookmarked (:. INDIA VISA from canada

I enjoy you because of all of your labor on this blog. My niece loves going through investigations and it is easy to understand why. We know all relating to the dynamic form you offer sensible things through the blog and in addition inspire participation from others on this concept plus our favorite child is actually becoming educated so much. Take pleasure in the rest of the new year. You’re the one performing a useful job. Туристична віза в Туреччину

I’d should check with you here. Which isn’t some thing I do! I like reading a post which will make people believe. Also, thank you permitting me to comment! AMERICA VISA APPLY ONLINE

whoah this blog is great i love reading your articles. Keep up the great work! You know, a lot of people are hunting around for this info, you could aid them greatly. קנדה ETA

It is very practical, word counter fast and compact

Congratulations to them on completing these 100 days. This is a big achievemnsts for them. And they have achieved their target. The way they are working hard we are hoping that they will soon get their brand on top.get redirected here

Vail's 'Dumb and Dumber' bank robbery victim outraged by new book Vail's bank robbery victim is reportedly furious that a new GQ article claims the he is taking credit for solving the crime. The author of the piece says there's no evidence that he had anything to do with it. So you visit chex systems victims ways to manage their business. "It looks like he might be taking credit for solving a crime that he didn't solve," said Peter Milz, who wrote the original story and was interviewed by Det.

Mobile apps for an incredible advancement in convenience and power for practically every aspect of life. In fact, mobile apps are expected to generate almost $1 trillion in revenue by 2023. CheckCashing247