RealAspen News and Community Content Feed
By Real Vail
Real Aspen – November 14, 2010
LEVI, Finland – Olympian Will Brandenburg (Spokane, WA) was 8th after the first run today and well on his way to his first Audi FIS Alpine World Cup top 10 when he was disqualified after straddling a gate on the steep part of the course.

Ted Ligety (Park City, UT) climbed eight slots in the second run to top the Americans with 18th. Jean-Baptiste Grange of France, who missed most of last season with an ACL tear, earned the wire-to-wire slalom victory.

"I know I can compete with the best in the world now," said Brandenburg, who was 10th in the Olympic super combined. "I was actually pretty suprised with where I was in the first run. I didn't think I skied that great. The second run I felt more comfortable and pushed it a little bit more on the pitch. Good things were going to come without that straddle, but I've just got to keep pushing it." 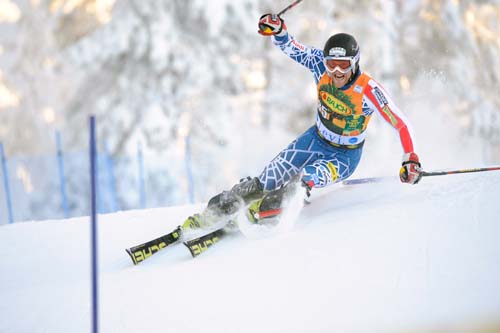 Will Brandenburg turned in a thrilling first run in Levi.
By Agence Zoom/Getty Images - Alain Grosclaude)

"Will absolutely showed he's got world class speed," said men's technical Head Coach Mike Day. "He'll make his way into the 30 and into the 15. He was on a good line and skiing solid, it was just an unfortunate straddle and that happens in slalom.

Brandenburg credits the extra time in the Center of Excellence this summer to progressing his skiing. Fitness, he said, has been the key to maximizing his training and translating that success onto the race hill.

"The hard work in the gym is definitely the biggest step I made this summer," said Brandenburg, who will return to Park City for a week before flying to Lake Louise, Canada for the opening speed races. "I'm stronger and I'm 10 pounds lighter, which makes me a little bit quicker down the hill for sure."

A tricky top section in the first run played havoc on the field as 30 of the 80 starters when out in the first run, including Olympic champion Bode Miller (Franconia, NH), Nolan Kasper (Warren, VT) and Tim Jitloff (Reno, NV). World Cup rookie Colby Granstrom (Lake Stevens, WA) showed promise on the top before hiking after missing a gate down the pitch.

"You could see there was a lot going on at the top of that first run," added Day. "Our guys fell into the same traps as the majority of the guys going out there. It was challenging, especially for the first race of the year. In training all of our guys have been right in there with Will, unfortunately we didn't execute tactically today."

The Vancouver slalom podium did an Olympic shuffle as slalom bronze medalist Andre Myhrer of Sweden put the second run pedal down to finish second ahead of Croatian silver medalist Ivica Kostelic. Grange won the 2009 World Cup slalom title, but was sidelined for most of season after tearing his ACL during a giant slalom in Beaver Creek, CO.

"Ted did a better job in the second run," Day said. "He knows he has a ton more speed and can do a better job. It'll just take some more time and he'll be right in there. It was a solid result and didn't do any damage.

"Neither run was spectacular, but I tied my best at Levi, which is very mediocre," said Ligety. "The skis are getting better, it just takes time to fully adjust especially in slalom. With things being as quick as they are, even with a little mistake, you can lose a lot of time fast."

Ligety will. return to Colorado for a few days of downhill training before the World Cup speed season opens in Lake Louise, Canada on Thanksgiving weekend followed by the storied Birds of Prey race week in Beaver Creek.

Can I just now say that of a relief to discover somebody who in fact knows what theyre speaking about on the internet. You actually know how to bring a worry to light and earn it essential. Workout . have to check out this and appreciate this side of your story. I cant believe youre not more well-liked since you definitely provide the gift. Best ISO Agent Program

Cruise is back and this time he brought he comedic chops with him. Merchant Services Referral Program

You completed a few good points there. I did a search on the matter and found nearly all folks will go along with with your blog. vipto

Great post. I was checking constantly this blog and I’m impressed! Extremely useful info particularly the last part I care for such info a lot. I was seeking this certain info for a long time. Thank you and best of luck. 500 litre water tank

We’re a group of volunteers and starting a new scheme in our community. Your website provided us with valuable information to work on. You have done a formidable job and our entire community will be thankful to you. A2 uv printer

Good website! I truly love how it is simple on my eyes and the data are well written. I am wondering how I could be notified whenever a new post has been made. I’ve subscribed to your feed which must do the trick! Have a nice day! 25kg parasol bases

Hello there! I know this is somewhat off topic but I was wondering which blog platform are you using for this site? I’m getting tired of WordPress because I’ve had problems with hackers and I’m looking at options for another platform. I would be fantastic if you could point me in the direction of a good platform. 벳샷

you are really a good webmaster. The site loading speed is incredible. It seems that you are doing any unique trick. Furthermore, The contents are masterwork. you have done a excellent job on this topic! 메이저놀이터