RealAspen News and Community Content Feed
By Troy Hooper
Real Aspen – July 11, 2010
Almost twice as many licenses to shoot local bears dead will be available this fall as the Colorado Division of Wildlife hunts for ways to combat the recent rise in human-bear conflicts.

Last year only 630 licenses were available in this neck of the woods for the fall bear hunt. This year, the Colorado Division of Wildlife requested 1,200 permits, but the Colorado Wildlife Commission approved 1,035.

Bear hunting is permitted across the Western Slope and is broken into 19 sections. Aspen shares a large boundary that includes the areas around Glenwood Springs, Eagle and Vail. In all, 11,980 bear permits were authorized statewide, up from 11,177 allowed in 2009. There were small increases to permits in other parts of the state but the biggest gains were in the Aspen and Vail area.

The agency, however, isn't merely relying on guns to solve the region's bear problems. 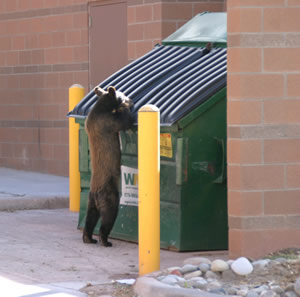 “I don't think, and the division doesn't think, that hunting in and of itself is going to be sufficient to eliminate the challenges we have with bears and humans in the Aspen area,” Hampton said.

“There is going to be conflict,” he continued. “Our goal is through education and through wise management, including hunting and things like the Bear Aware Team in place in Aspen and the city of Aspen's new trash regulations, that we can get to a point where we minimize that conflict.”

Last year bears were particularly problematic in the Aspen area. In one episode, a black bear struck a man in the head in his Aspen home when he came downstairs to check on his barking dogs. Another time, a black bear was said to have, unprovoked, attacked a woman in her Aspen home, clawing her back and chest before feasting on chocolate taffy, candy and other treats in the woman's home. Ultimately wildlife officials killed 20 bears in the Aspen area that repeatedly entered human property.

Bears have been relatively low key so far this summer. But it is the latter part of the summer and most of the fall that bears make their presence known. The string of violent encounters with bears in Aspen last year occurred in August and September, when they are spending 20 out of every 24 hours eating, devouring 20,000 calories a day in preparation for their winter-long hibernation.

Helping bears during this feeding frenzy, or hyperphagia, is their uncanny sense of smell: a bruin can sniff scraps rotting in a garbage can, greasy barbecue grill or a bag of potato chips left near an open window from miles away.

News that the state was seeking to increase the number of bear hunting permits in the Aspen area caught the attention of animal advocates, notably the WildEarth Guardians, who reportedly swore to “raise a ruckus” if the number of permits were significantly increased. But the group, and other defenders of wildlife, so far haven't been vocal since the Wildlife Commission upped the permits at the end of May.

Just because 1,035 permits will be issued for the Aspen and Vail area, that doesn't mean 1,035 bears will be killed. The total number of bears that hunters actually shoot dead usually equates to just 5 percent of the quota, according to Hampton. Bear hunts have historically been difficult for the public to digest.

In the 1990s, voters across Colorado elected to ban the state's spring bear hunt. Using bait and hounds were also outlawed, which has dramatically reduced the success rate of ursus hunters. The spring bear hunt opponents pitched it as a measure to reduce the taking of sows with dependent cubs, which are more common in the spring. So now bears are only targets from September to late November.

Wildlife experts estimate there are between 8,000 and 12,000 bears in Colorado. Because bears have a vast roaming range and are relatively reclusive, Hampton said it is difficult to pinpoint accurate numbers for various regions in the state. He said hunting numbers are established based on computer models that break down gender ratios of cubs, gender of harvest, predation reports and other factors.

The city of Aspen has been recruiting volunteers to educate homeowners about how to avoid conflicts with wildlife, emphasizing that food and garbage are properly stored, and doors and windows are locked. The city of Aspen and Pitkin County are also issuing bigger fines to garbage scofflaws.

“So far the berry crop looks very good. We're still waiting for it to ripen up, and so are the bears,” Hampton said. “With grasses seeding out and becoming less palatable to bears, we are seeing a spike in activity right now. Hopefully everybody keeps their trash buttoned down. If people cooperate, the bears will be quick to find the berries as they ripen. Oak brush acorns will come along later in the summer and be the next forage source."

Hampton added: “We want a thriving and healthy bear population in Aspen and across Colorado."

0 Comments on "Division of Wildlife doubles number of bear-hunting permits in Aspen, Vail"