RealAspen News and Community Content Feed
By David O. Williams
Real Aspen – November 8, 2010
Even without her own home-hill training course on Vail's Golden Peak, Lindsey Vonn the last two seasons has finished first and second in slalom at the site of next weekend's World Cup ski race in Levi, Finland.

Now she heads into Saturday's race having spent the last week training slalom on the Golden Peak course she grew up on as a Ski and Snowboard Club Vail product in the 1990s. A $3 million state-of-the-art snowmaking system has allowed the entire U.S. Ski Team to get in some invaluable early season training on Golden Peak. 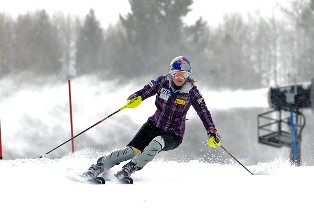 Lindsey Vonn trains on Golden Peak last week.
By Tom Green/Vail Resorts
Vonn credited the dedicated training facility – which hadn't quite come online at this point last season – with helping her achieve a gold and bronze at the 2010 Vanouver Winter Olympics last February. This season Vonn was joined by other members of the A team, including Bode Miller, Ted Ligety and other members of the men's squad.

“They're loving it,” U.S. Ski Team spokesman Doug Haney said of Golden Peak. “The training here has been outstanding for us. Up in the morning early when things are nice and rock hard and the kids have been ripping it up, having a good time. What snow we've had is hard and solid and perfect training.”

Right after the World Cup opener Oct. 23-24 in Soelden, Austria, Colorado saw its first significant snow of the season, allowing the Americans to jet back home for training on home snow. Indian summer has kicked back in since then, and Haney hopes the team's impending departure for Finland will get the snow gods smiling again.

“It would be nice to widen it a little bit so we can get some more training lanes,” Haney said of the Golden Peak track. “That would be nice. But Mother Nature has done her part when she needed to. It snowed when we were in Soelden so we could come straight here and that was exactly what we needed.”

And Real Vail weather blogger Reid Griebling is calling for a week of unsettled and snowy weather starting tonight and into Tuesday. Another storm is expected to move into the state Thursday.

The women's team leaves Vail today and the men are set to head to Europe a couple of days later. Vail Resorts and the Ski Team hosted a celebration Saturday to name the full squad for the coming season, including the B, C and development teams.

“I'm really excited that Vail and the U.S. Ski Team put together this amazing event to name the 2011 team,” Vonn said. “It's a cool way for our fans, both here in Vail and watching the event live on Universal Sports to get to know all the athletes on the team. Vail always puts on a great show and I think this will add a lot of excitement for people to continue to cheer us throughout the season.”

Vonn is chasing history this season. Her next World Cup win puts her in sole possession of sixth on the all-time women's victory list at 34, just two behind German great Katja Seizinger for fifth place. The only active racer ahead of her on the all-time list is the Swedish legend Anja Paerson in fourth with 41 wins.

Winner of the last three overall World Cup titles, Vonn has made no secret of the fact she's shooting for the single-season victory mark of 14 wins set by Switzerland's Vreni Schneider in 1988-89. Vonn won 11 races last season. 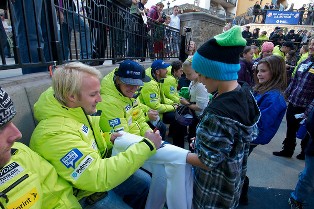 Vancouver Winter Olympic bronze medalist Andrew Weibrecht signs autographs in Vail Saturday.
By Tom Green/Vail Resorts
Bode Miller, the best American man of all time (7th overall with 32 World Cup wins), somewhat surprisingly returned for his 13th season on the U.S. Ski Team after winning a gold, silver and bronze at the Vancouver Games. He told the Associated Press he isn't sure how much he'll race this season, perhaps only competing up through the World Championships in Garmisch in February.

Miller says he isn't necessarily skiing to build on his already impressive legacy this season. “It's about doing what I like to do best,” he said. “It was never about the victories. Not at the beginning of my career and not now. I just love to ski, stay fit and encourage kids to get out and do the same.”

The men have yet to complete a World Cup this season. The opener in Soelden was called due to fog with 2006 Olympic combined gold medalist Ligety in second after the first run. American women are hoping to improve on their results from Soelden, where three-time Olympic medalist Julia Mancuso had the best result in 12th. Vonn was 18th and Schleper tied for 19th.

Haney said much of the U.S. squad will return to Vail after the Levi races to continue training on home snow heading into the only two World Cup races in the United States this season, the Aspen Winternational for women over Thanksgiving weekend and the Birds of Prey races for the men at Beaver Creek Dec. 3-5. He added the U.S. Ski Team hopes to establish a long tradition with the new early season training at Vail.

“We've got a great relationship with Vail, so I don't see that changing in the next years,” Haney said. “These guys are putting outstanding effort into getting the hill ready for us to train on, and it's cool that we're able to take advantage of that.”

Vail is hosting the 2015 World Alpine Ski Championships – the third time Vail and Beaver Creek have had the worlds – and the International Ski Federation (FIS) Council recently set the dates for Feb. 3-15, 2015.

“We are excited to be able to put this next piece of the 2015 puzzle into place with the dates,” said Vail Valley Foundation President Ceil Folz. “These dates will allow us to showcase our sport during the height of the ski season in America and around the world. Early February is a fantastic time to be in Vail and Beaver Creek and these images will be shown around the globe in a prime time viewing spot for Europe.”

Vail is putting in a new women's downhill course adjacent to the men's Birds of Prey Course at Beaver Creek, and for the first time in many years women will race technical events on Vail Mountain in 2015.