Colorado a speck of blue in wake of GOP bloodbath

With the rest of the country drowning in a red bloodbath on Tuesday that turned over the U.S. House to Republicans and drastically cut into the Democratic Senate majority, Colorado was still feeling somewhat blue – if not slightly purple around the gills. 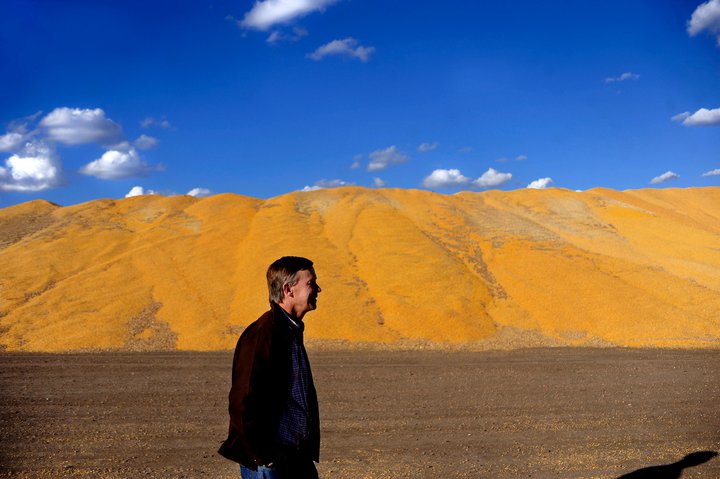 John Hickenlooper at a corn harvest in Yuma.

And it looks like Tea Party favorite Ken Buck, a Republican district attorney who continually shot himself in the foot down the stretch run, will lose out to incumbent Democratic Sen. Michael Bennet by the slimmest of margins. The Denver Post was calling the race for Bennet at 8 a.m., with the Democrat leading 778,261 votes to 771,274 for Buck.

Democrats held onto one of three hotly contested congressional races, with Ed Perlmutter nudging aside Ryan Frazier in CD7, but Blue Dog Democrats battling for their political lives in traditionally Republican territory lost out in the national wave of GOP wins. Betsy Markey lost to Cory Garnder in CD4 and John Salazar was taken out by Scott Tipton in CD3.

Still, with incumbent Gail Schwartz, D-Snowmass, hanging on to beat Bob Rankin, R-Aspen, in Senate District 5 to keep the state Senate blue as the state House turns red in this critical resdistricting year, Democrats had plenty to celebrate. Hickenlooper told the crowd of still enthusiastic supporters he would set aside the rancor of the last 12 months and continue the positive tone he established with a campaign in which he didn't run a single negative ad.
Gail Schwartz

“I am honored and humbled by the decision Colorado voters have made, and I accept the challenge that you have entrusted me to lead the state of Colorado,” he said. “But as we've said right along, this is not the end but the beginning, and it starts with bringing people together.”

“We can make a Colorado that is pro-business but still maintains the highest standards for health and preserving water and resources,” he said. “Colorado is the greatest state in this nation, in this world, to live and work in.

“The global recession didn't start here, but we intend to make sure that we end it here. But it's going to take all of us – Democrat, Republican, unaffiliated, Constitution Party, from Eastern Plains, Western Slope, Four Corners, wherever they're from, whatever they do.”

Outgoing Gov. Bill Ritter acknowledged it was a tough time to run as a Democrat.

“If you're watching what's happening around the country, there are some hard things for Democrats to watch,” Ritter said. “We are in the midst of a recession; we have been for a long time prior to President Obama taking office, by the way. It's been a difficult two years and there's some voter frustration and angry feelings as well.”

And Ritter also said the Democratic Party remains the all-encompassing party of the people.

One of Buck's campaign gaffs included saying on Meet the Press that homosexuality is a choice – one that he compared to alcoholism. Buck also didn't back down from “buyer's remorse” comments he made when refusing to prosecute an old rape case in which the suspect confessed.

Colorado's senior Sen. Mark Udall, who did not have to run for re-election in this brutal climate for Democrats, said, “Enough with the sound bites and the slogans; enough with the $40 million that has been dumped into our state [by outside groups on both sides] in the Senate race.” He told the crowd it was time to move on, listen to the voters and kick the green economy into high gear.

“We have to acknowledge Gov. Ritter,” Udall said. “I have no doubt that historians will give him many, many kudos for initiating green campaigns. [But] let me just share with you what the voters are saying tonight. They're saying that they want us to focus on jobs and the economy, and they're saying they want us to work together.”

Colorado's senior congresswoman, Democrat Diana DeGette — who easily rolled to victory in CD1 — said the state cares deeply about certain values and will not compromise them even in the face of a conservative tidal wave.

“Never give up and never give in about the values we care about,” DeGette said. “The voters will see what we are doing for them; 2012 will bring the resurgence of Democrats.”

you have a very wonderful weblog here! do you want to cook some invite posts on my weblog? istanbul airport bus service

Wow, cool post. I’d like to write like this too – taking time and real hard work to make a great article… but I put things off too much and never seem to get started. Thanks though. 소울카지노먹튀

Very good written article. It will be supportive to anybody who usess it, as well as myself. Keep doing what you are doing – for sure i will check out more posts. 1000 litre water tank

There are some interesting cut-off dates in this article but I don’t know if I see all of them center to heart. There is some validity but I’ll take maintain opinion till I look into it further. Good article , thanks and we would like extra! Added to FeedBurner as effectively 6.7 Cummins EGR Delete Kit

Cheap Gucci Handbags Is usually blogengine much better than wp for reasons unknown? Should be which is turning out to be popluar today. deck umbrella

eating can be considered my hobby he he he. i would really love to visit foods blogs and see some recipes:: find a patent attorney

An intriguing discussion might be priced at comment. I do believe you should write on this topic, may well be a taboo subject but typically folks are inadequate to communicate in on such topics. To a higher. Cheers 벳쑤아리

We have a casino floor game that challenges you to try. Lots of jackpots and cash are waiting for you. 24/7 Service Pussy888 is the place for casino games that have everything you need. With games like 918Kiss, Joker123 and Pussy888, we are the top choice for online casino gambling!​ Open in Google Translate • Feedbac pussy888

Hello there! I know this is somewhat off topic but I was wondering which blog platform are you using for this site? I’m getting tired of WordPress because I’ve had problems with hackers and I’m looking at options for another platform. I would be fantastic if you could point me in the direction of a good platform. 벳샷

Chances are you’ll even uncover a solution admirer for there are actually changes inside your like daily life and really like of everyday living – you have certainly not dreamed of, all without excessive effort in your portion! 안전놀이터