RealAspen News and Community Content Feed
By Troy Hooper
Real Aspen – November 1, 2010
The mammoth fossil find above Snowmass Village has grown even bigger with the discovery of multiple mammoths as well as a tooth from another giant large-tusked extinct mammal, the mastodon. 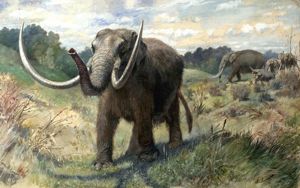 The Snowmass Water and Sanitation District is donating the fossils to the Denver Museum of Nature & Science, which will begin excavation of the site on Tuesday. A bulldozer driver uncovered a single juvenile Columbian mammoth Oct. 14 while working on the expansion of Ziegler Reservoir. Since then, “several additional mammoths and a mastodon tooth” were unearthed, museum officials said.

What the museum's scientists, educators and trained volunteers might find next is only adding further intrigue into what is already one of the most significant scientific discoveries in Colorado history.

“We do not know if this site contains just mammoth and mastodon bones, or whether there may be evidence of human interaction with the bones, as well,” said Dr. Steve Holen, curator of archaeology and the museum's resident mammoth expert. “For that reason, we will be cautious and use precise and careful techniques of excavating in a grid and screening all of the sediments surrounding the bones so we don't miss anything.”

Experts say it is rare to find more than one mammoth at a single site and this is the first one ever in Colorado to contain both mammoth and mastodon fossils. With their huge elephant-like bodies and curved ivory tusks, mastodons resemble mammoths but are only distantly related. The name mastodon translates to “nipple teeth,” in reference to the nipple-like projections on the crowns of their blunt, leaf-grinding molars. Mastodon bodies are stockier than mammoths and their skulls are generally bigger and flatter.

Before this month's discovery in Snowmass, there have been only three mastodon finds in Colorado. Mammoth finds are more common, with 103 of them occurring in the state prior to Snowmass. 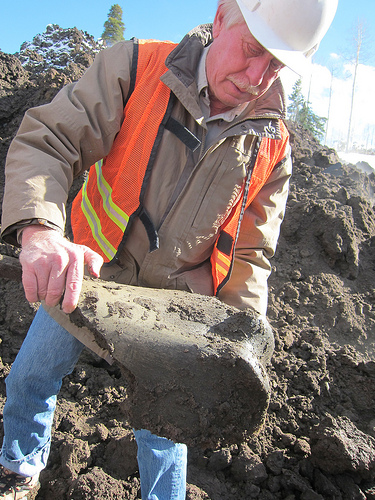 A fossil in Snowmass
Denver Museum of Nature & Science

Museum officials say the juvenile Columbian mammoth may be the most complete mammoth fossil ever found at high elevation in Colorado. The mammoth and mastodon site is at 8,960 feet. The bones are moist and in premium condition thanks to the suffocating peat in which it is buried. The peat bog, likely formed when glaciers retreated from the Brush Creek Valley at the end of the last Ice Age, has prevented oxygen and minerals from turning the bones into stone. Scientists say one of their immediate challenges will be to gradually dry the bones without them cracking or disintegrating.

The bones are currently estimated to be between 12,000 and 16,000 years old, but paleontologists hope to better pinpoint their age through radiocarbon dating of the specimens and surrounding sediments. They will also attempt to extract DNA from the bones to determine the animals' sex and other data. Scientists are also keen on the ancient plant materials that, like the bones, have been well preserved in peat.

"One of the great things about living in the American West is that amazing fossils can be found in all sorts of places. The Snowmass mammoth is a perfect example of how alert workers can make discoveries that have great significance," the museum's chief curator Dr. Kirk Johnson said.

The Denver Museum of Nature & Science will create casts of the bones of one of the mammoths and provide them to the Snowmass Water and Sanitation District, along with a plaque or other interpretive material, for public display. Under the terms of its agreement with the district, the museum will also send scientists back to the Roaring Fork Valley to make presentations in schools about their findings. It could take as long as two years before a public display is erected due to the long fossil preservation process. The museum is also picking up the expenses for the site's excavation, fossil transportation and preservation. The district has provided a heated tent and aided with around-the-clock security at the dig site.

About 25 percent of the Columbian juvenile mammoth's bones were uncovered by the Snowmass Water and Sanitation District contract worker a couple of weeks ago and those bones have been cleaned and put on display where hundreds of local residents and school children have studied them up close. Museum officials intend to make arrangements to the dig sites for students and media when conditions permit.

Outside scientists from universities and the United States Geological Survey will also study the find.

0 Comments on "In Snowmass, a big discovery becomes mammoth "