The purchase gives the Broomfield, Colo.-based ski and real estate company two ski areas in California, including Heavenly, in addition to its four mountains in Colorado: Vail, Beaver Creek, Breckenridge and Keystone. 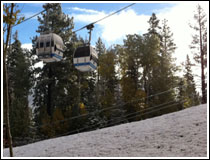 New snow at Northstar at Tahoe, which was just acquired by Vail Resorts

The operations of Northstar-at-Tahoe are conducted on land owned by CNL Lifestyle Properties, Inc. which will be leased to Vail Resorts under a long-term agreement. The Sierra-at-Tahoe ski resort is not part of the deal and will continue to be operated by Booth Creek.

“We are thrilled by the opportunity to bring Northstar-at-Tahoe into our family of world-class mountain resorts. With substantial and diverse ski terrain, a completely renovated and modern base village and outstanding guest service, Northstar-at-Tahoe has been one of the fastest growing mountain resorts over the past few years,” said Rob Katz, chairman and chief executive officer of Vail Resorts.

“We believe guests of Heavenly and Northstar will greatly appreciate the flexibility to enjoy both the north and south shores of Lake Tahoe as we introduce pass and lift tickets products that offer access to both resorts starting with this coming 2010-11 ski season.”

Northstar is host to a new base area village featuring 35 shops and restaurants in more than 100,000 square feet of commercial retail space, a conference center, a 9,000-square-foot skating rink, on-site lodging and venues for special events.

Vail Resorts announced that it will begin an immediate search for a new general manager of Northstar-at-Tahoe, which will include both internal and external candidates.

“I want to thank George, the Gillett family, Chris and Betsy for their vision and leadership in bringing the Northstar-at-Tahoe Resort to world-class status over these past years,” said Katz. “We are incredibly excited to bring the entire Northstar team into the Vail Resorts family. They have all been responsible for one of the great success stories in the mountain resort industry today.”

The company also announced Northstar is being added to its eight-mountain Epic Pass for the coming season and Colorado Pass holders will also get five days of skiing at Heavenly and Northstar.