Now there is growing controversy over foreign companies seeking to cash in on mining uranium from Colorado's public lands. Near Telluride, a Canadian company is trying to develop a uranium mill to process yellowcake, and at the headwaters of the Arkansas River near Cañon City, there are several controversial mining and milling projects.

But Uranium One, a Canadian company mired in controversy over its proposed purchase by a Russian mining conglomerate, is divesting itself of its Colorado mining interests because of “all the politics and all the local sentiment” against uranium mining in the state, an executive told Real Vail recently. 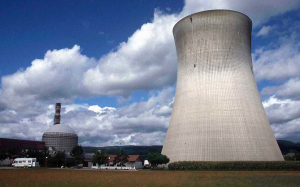 A revival of nuclear power in the United States could mean more uranium mining on Colorado's Western Slope.

“Nothing,” Uranium One vice president of conventional mining Norman Schwab said when asked what the company currently has going on in Colorado. “I had a lot of different properties in Colorado and we're not into waiting for years for sentiment to change, so in terms of work in Colorado we've dropped the various properties and we're focusing in Utah and Arizona and other states that are pro-mining. It's as simple as that.”

One of those more pro-mining Rocky Mountain states is neighboring Wyoming, where Uranium One is launching an in-situ mining project in the Powder River Basin. Republican lawmakers have objected to the purchase of Uranium One by Russian government-owned Atomredmetzoloto (ARMZ) for national security reasons.

There is considerable political angst that uranium mined in Wyoming could wind up in Iran because ARMZ supplies that neighboring and highly unfriendly nation. Uranium One's Schwab, a South African based in the company's Denver office, said it's fear-mongering to suggest highly regulated uranium will wind up in a rogue state. It's the unregulated stuff people should worry about, he said.

“It's like gun ownership, for instance,” Schwab said. “In South Africa, the only people who own guns now are the criminals, because the people who try to do it legally are prohibited. It's just impossible.”

The Denver Post last week reported Russian Ambassador Sergey Kislyak addressed the political issue during a Denver visit on Tuesday: “Do you mind some investment? It is a normal commercial operation — not something that is operating on any political guidance.”

In a statement to Real Vail, Colorado Sen. Mark Udall, a proponent of reviving the nation's moribund nuclear power industry, said the ARMZ sale needs to be watched closely.

“With the increasing interest in strategic minerals, it's definitely valid and responsible to ask serious questions about who has the right to extract, own and develop them, and I'm continuing to study the situation involving Uranium One,” Udall said. “I also understand that the proposal must be cleared by the U.S. Committee on Foreign Investments.”

U.S. Treasury Secretary Tim Geithner also must sign off on the sale, and he will have to do so under a cloud of suspicion dating to the Cold War and the fact that a deal supplying American nuclear plants with uranium from old Russian nuclear weapons is set to expire in 2013. Despite a virtual freeze on new nuclear plants since the Three Mile Island accident in 1979, the U.S. still gets 20 percent of its electricity from aging nuclear plants.

More than 90 percent of the uranium used in U.S. nuclear plants is imported, and under the expiring weapons program, up to a third of that supply comes from Russia. Colorado is a former uranium-mining hotbed that produced uranium for some of the first atomic weapons, and in some depressed areas of the state an industry revival is viewed favorably. But there is mounting environmental and political pressure to clean up the industry's toxic legacy and limit future operations.

Uranium One's Schwab sees that as a mistake.

“If you think oil is bad, uranium is in the exact same picture where you import all your uranium and you're going to be held hostage to that when in 2013 the agreement with the Russians ends,” he said. “Then, where do you get your uranium from?”

Jeff Parsons, senior attorney for the Western Mining Action Project, says Colorado is poised to get all of the environmental problems associated with the “dirty front end [mining]” of any nuclear power revival and few of the benefits.

“The increase of foreign companies taking over mining interests in the United States is part of a trend over the last 20 years or so,” Parsons said. “We've seen more and more foreign mining companies in Colorado and across the West.”

Uranium is a “locatable mineral” under the 1872 Mining Law that was meant to speed the settlement of the West, and as such it is not subject to any sort of royalty payment similar to what the oil and gas industry must pay to drill on federal lands.

“What's happened in the last 20 years is the growth in multi-national foreign companies taking over these deposits is they get a better deal in the United States than they get in any other country,” Parsons said.

I think that allowing foreign companies to mine our minerals is egregious and should be stopped immediately.

Foreign companies do not have a vested interest in keeping our environment safe and clean. The work at the edge of safety and often ignore environmental laws. BP is a good example of this fact.