Defending giant slalom champion Ted Ligety (Park City, UT) was within .02 of Frenchman Cyprien Richard's first run lead when officials called the race. Olympic gold medalist Bode Miller (Franconia, NH) had also booted up for a second run after finishing the first run in 23rd. The race will not be rescheduled.

Visibility was minimal and snow conditions were noted as "chunky" when the racers took to the gate for the men's World Cup opener in Soelden. With six U.S. athletes kicking out of the start, the challenging conditions took its toll on the field. 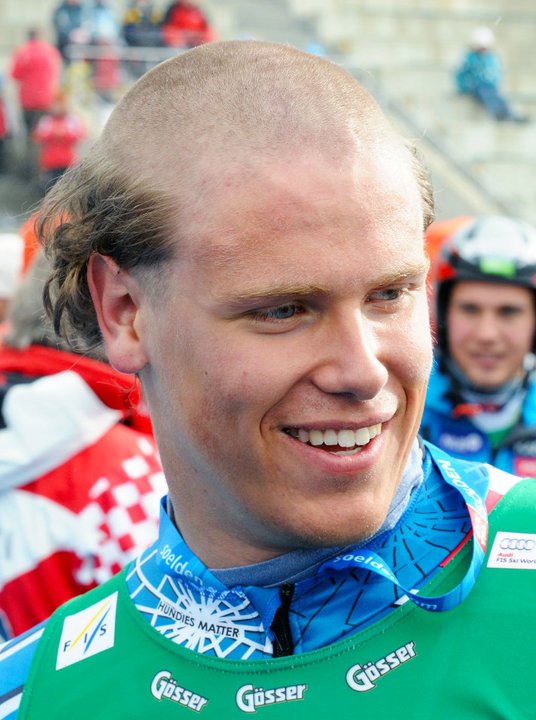 "The whole way down was pretty tough. The visibility wasn't great today and the snow was chunky," said Ligety. "Since you couldn't see that well it was hard to really gauge where you could push on the ski."

However, despite the difficult circumstances the men charged out of the gate. Ligety was ripping, taking a deep line before a pretty significant mistake on the top of the steeps. But he made a great recovery and was able to carry his speed onto the flats.

"I did a pretty good job coming off the steep and the flats today. I was able to let it run," said Ligety, following his second place finish, just two hundredths behind Richard, after the first run.

After making a switch to Head skis following the 2010 season, Ligety is skiing well on his new equipment. Having trained on them all summer, he powered through mistakes and tough weather, putting to rest any questions about how he is adjusting the new change.

"They're running well," said Ligety. "I didn't think I skied that well first run either, so I think have more speed."

Miller, like Ligety experienced some trouble, after being down only one hundredth after the first split, he hip checked at the top of the steep. But in true Miller fashion, he made a remarkable recovery to qualify for the second run in 23rd.

With a fascinating new haircut, (the video can be seen on the U.S. Ski Team Facebook Fan Page), World Cup rookie and Ski and Snowboard Club Vail product Will Gregorak (Longmont, CO) was only .19 out of the lead at the first split before making a substantial mistake on the steep. Gregorak was able to make it to the finish after a speed check when he threw his skis sideways in order to stay in the course.

"I was a little nervous in the run-in up to it, but when I got on snow I felt pretty good and calm," said Gregorak. "When I went out of the gate I felt nice and comfortable and skied well. I have to get used to how rough it is to start back there. But I'm happy with my mindset going into the run and how I skied."

The visibility continued to change with the fog and sun moving in and out of the clouds throughout the first run, adding another challenging factor to the severely rutted course. With a little advice from teammate Tommy Ford (Bend, OR), Gregorak took full advantage of his start, feeling the vibrations of the crowd as he came onto the steep before the finish.

"Tommy Ford had a bit of good advice for me," said Gregorak. 'He said when you come over that steep break, you are going to see and feel the crowd. So you have to be ready to have the vibration coming down, and he was right I could feel it!"

The U.S. had two athletes qualify for the second run, Ligety in second and Miller in 23rd, before the race was canceled due to unfortunate weather with a huge cloud layer covering the course from just below the start to the finish. The race will not be rescheduled. According to FIS race protocol, canceled races in the World Cup openers and World Cup finals are not rescheduled.

"It's always a bummer when you are in second place after the first run and they don't run the second run. I felt like I was in a good position to go for the win or at least be on the podium," said Ligety after the race was canceled. "It was gnarly, you could barely see anything so it's definitely on the safer side, but it's always disappointing."

The U.S. Ski Team will head west to Colorado for some early season stateside training before heading back to Europe for the first slalom World Cup of the 2011 season in Levi, Finland, Nov. 13-14. Then the World Cup circuit heads back to North America, where the men are in Lake Louise, Canada, Nov. 24-28, while the women are in Aspen Nov. 27-28. Then the women head to Lake Louise while the men come to Beaver Creek Dec. 3-5 for their only World Cup stop in the U.S.

"It will be nice to be stateside again training in Colorado," said Ligety. "Hopefully we get some good slalom training in and get ready for the first slalom races."

Some tips on finding a good ski club include checking out online reviews and ratings, looking for clubs with a good variety of terrain and activities at assignment writing services and considering whether the club has a strong social atmosphere.

I’m impressed, I must say. Genuinely rarely do you encounter a blog that’s both educative and entertaining, and let me tell you, you may have hit the nail to the head. Your thought is outstanding; the pain is a thing that not enough folks are speaking intelligently about. My business is delighted that we found this in my try to find some thing regarding this. Schonbrunn palace Vienna