A mammoth display in Snowmass

RealAspen News and Community Content Feed
By Troy Hooper
Real Aspen – October 21, 2010
Inside a chain-linked fence at a guarded reservoir above Snowmass Village lie the bones of a juvenile mammoth that could provide paleontologists with more clues about the ancient beast and its foggy past. 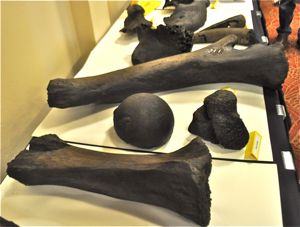 A bulldozer driver pushed the bones up Thursday during a reservoir expansion project. Buried in a peat bog about 15 feet beneath pond scum and a thick layer of clay, the bones are in premium condition. Scores of them have already been dug up.

About 80 percent of the animal is still under layers of suffocating peat that prevent oxygen and minerals from turning the bones into stone. Workers at the site expect to fully excavate the mammoth in two to four weeks. As Real Aspen was first to report, scientists are still determining whether the bones are a juvenile Columbian, woolly or some other mammoth species. Testing still needs to be done, but preliminary estimates place the recovered bones at between 10,000 and 30,000 years old.

“Everything is in fantastic shape,” said Ian Miller, paleontologist and chairman of the Denver Museum of Nature and Science's earth sciences department. “This is a real treasure trove.”

The other estimated 20 percent of the mammoth was put on display at the Snowmass Village Water and Sanitation District's monthly meeting on Wednesday. The meetings are usually lightly attended. But this morning, curious residents and media members packed the meeting at the Snowmass Club. Schools also organized field trips to the club so children could witness history with their own eyes. 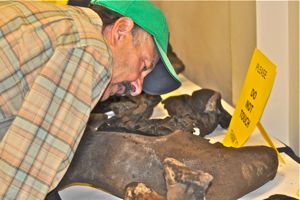 The district board hasn't officially decided what to do with the mammoth bones found at the 8,800-foot Ziegler Reservoir, which workers are more than quadrupling in size to keep up with the demands of the resort. So far, however, all signs are pointing to the Denver Museum of Nature and Science taking the skeleton and preserving it. If the bones are given to them, museum officials say they will be preserved in a controlled climate to prevent them from drying out and be put on display at the end of a prehistoric exhibit. Officials are also talking about displaying a cast of the mammoth skeleton in Snowmass.

Pointing a stick at a piece of the mammoth's spinal bone poking out of the peat, Bob Mutaw, cultural resources specialist for reservoir engineer URS Corp., said the expectation is that paleontologists will uncover a single mammoth skeleton. But they won't really know until they finish the excavation.

Breaking apart clods of peat revealed well-preserved ancient leaves. If evidence of early human settlement is found — a strand of hair or a stone tool, for instance — experts say the already magnificent discovery would become epic. 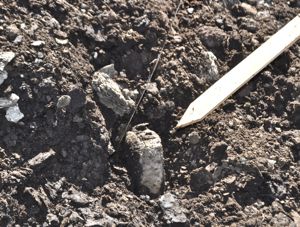 Spinal bone poking out of the earth.
Troy Hooper

“We can actually take a sample from a site like this and search for human DNA,” Miller noted.

For now, the discovery of mammoth bones is gargantuan in itself.

Relatives of the modern elephant, mammoths are believed to have roamed the earth in great numbers beginning 4.8 million years ago. Different mammoth species evolved over time, with the Columbian and woolly variety fading into extinction at the end of the last Ice Age.

Paleontologists say Columbian mammoths are known to have roamed the Colorado Plateau. So far, there has not been any evidence of woolly mammoths in Colorado, they say, but this could be the first.

Columbian mammoths were similar in appearance to woolly mammoths. But the Columbian mammoth had less hair and were usually bigger. There are different theories on what killed off the creatures. Climate change, over-hunting and disease are possibilities. 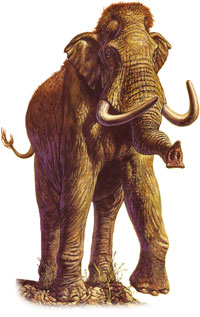 0 Comments on "A mammoth display in Snowmass"