Two discoveries made in Colorado in 1874 — Alferd Packer's alleged man-eating in the San Juan Mountains and the recovery of tyrannosaurus rex teeth near Golden — may now have a common denominator.

Both may be connected to cannibalism. 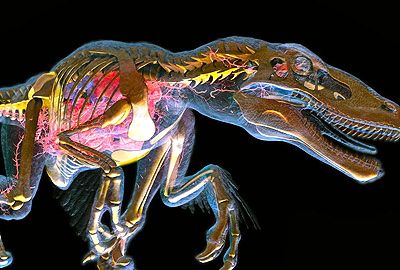 A new study published Friday in the science journal PLoS One found that back in the Cretaceous period, some 65 million years ago, the mighty tyrannosaurus rex was feasting on its own brethren. Like Packer — a prospector who was accused of eating five of his companions in 1874 when they became snowbound on a trip from Montrose to Gunnison — the tyrannosaurus rex once roamed Colorado.

Yale University paleontologist Nick Longrich discovered a bone with especially large gouges in them while searching through fossil collections for another study. He fingered T. rex as the perpetrator.

“They're the kind of marks that any big carnivore could have made, but T. rex was the only big carnivore in western North America 65 million years ago,” Longrich said in a Yale press release.

But at first Longrich didn't realize the victimized bone was also that of a T. rex. Once he did, he checked several different museum fossil collections and found a total of three foot bones and one arm bone that supplied further evidence of T. rex cannibalism. That led to yesterday's published study. 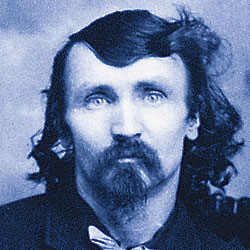 There is enormous interest in what the “tyrant lizard” (the Latin translation of tyrannosaurus rex) feasted on since it is one of the largest land carnivores of all time. One of the longer running debates in paleontology is whether the tyrannosaurus rex was primarily a scavenger or an alpha predator that gorged on other species of dinosaur.

But never before had it been seriously suggested that T. rex could have been a cannibal.

“Tyrannosaurus … seems to have been an indiscriminate and opportunistic feeder, feeding not only on herbivorous dinosaurs, but also on members of its own species,” the study reads. “It does seem improbable that tyrannosaurus routinely hunted full-grown members of its own species; however, it is possible that intraspecific combat led to casualties, with the dead becoming a convenient source of food for the victors. Still, compelling evidence for predation in tyrannosaurus remains elusive. Healed injuries in herbivorous dinosaurs are consistent with failed predation, but it is debatable whether these traces are actually the results of bites, or some other form of trauma.” 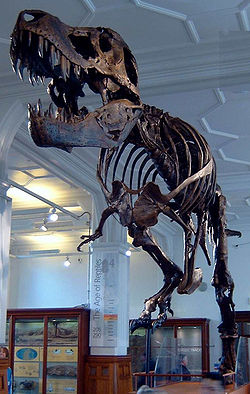 The publication notes that other large meat-eaters, particularly alligators, are also proven cannibals. In addition to Longrich, John Horner of Montana State University, Gregory Erickson of Florida State University and Philip Currie of the University of Alberta, Edmonton, authored the study.

The discovery of teeth in Golden in 1874 was of the earliest finds of tyrannosaurus rex fossils. Since then, dozens of tyrannosaurus rex skeletons have been unearthed. One dig revealed soft tissues from the dinosaur that were found in 2005 on a ranch in northeastern Montana. The tissues were revealed when paleontologists had to break a gargantuan thighbone so it could fit inside a helicopter.

Three years ago, a study of the T. rex tissue in the journal Science connected the dinosaur's DNA to chickens, which supports the theory that birds evolved from dinosaurs.

While the revelation that the tyrannosaurus rex might have been eating its own is groundbreaking, the authors of the study said they weren't at all surprised.

“Cannibalism is common in nature,” they wrote.

0 Comments on "Before there was Alferd Packer, there was T. rex"