In total, 14 towers, cross-arms and sheave assemblies were installed in a matter of hours as construction continues on the new lift in preparation for the 2013-14 ski season. The upper and lower terminals will be constructed over the next few weeks.

The new high-speed, six-passenger Doppelmayr chairlift will result in a 33 percent increase in uphill capacity for the lift, or 3,600 people per hour, which is the same capacity as Vail’s new Gondola One. 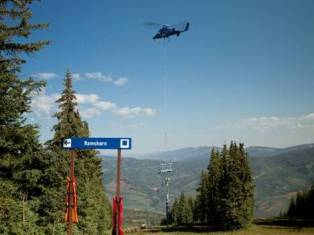 It will feature loading gates with a right angle loading conveyor system, which has been shown to reduce the number of lift stops and slows, thereby increasing the efficiency of the lift

The old Mountaintop Express Lift was installed in 1985 and provided access to Patrol Headquarters and a number of surrounding areas including Vail’s legendary Back Bowls and Blue Sky Basin.

The new lift will provide better access to the area at Mid-Vail after snow riders get off the new Gondola One.