RealAspen News and Community Content Feed
By Real Vail
Real Aspen – August 24, 2013
After sprinting across the line to take the win in both Aspen and Steamboat Springs earlier in the week, Peter Sagan (SVK) of Cannondale Pro Cycling added a third USA Pro Challenge stage victory to his list after crossing the line first to the cheers of excited fans in Fort Collins.

The 115.2-mile stage through northern Colorado on Saturday included a Category 2 climb and several breakaways, but ultimately it came down to the final moments where Sagan edged out Luka Mezgec (SLO) of Team Argos-Shimano, who came in second and Greg Van Avermaet (BEL) of BMC Racing Team in third.

Tejay van Garderen (USA) maintained his overall lead and will wear the Smashburger Leader Jersey for the final day of racing tomorrow in Denver.

“I’m having an amazing time racing here in Colorado on the roads that I used to train on in high school – it’s unbelievable,” said van Garderen. “The crowds here are incredible. Colorado is a cycling-crazy state.” 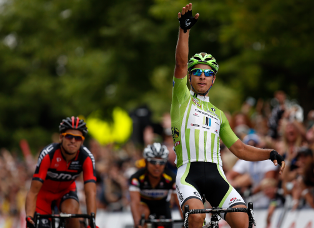 Stage 6 of the USA Pro Challenge took the riders through challenging terrain on a route through picturesque northern Colorado from Loveland to Fort Collins.

“Today’s stage of the USA Pro Challenge gave us the chance to showcase another beautiful part of the State of Colorado to the world,” said Shawn Hunter, CEO of the USA Pro Challenge. “We saw impressive crowds cheering on the riders at the start line in Loveland all the way to the packed streets of Fort Collins this afternoon. The number of people that came out to watch the race today was amazing!”

After a short, neutral start heading out of town, the riders kicked it into high gear and punched up the speed to 40 mph. With the first of three Clif Bar Sprints taking place in Windsor, just 5.1 miles into the stage, the riders kept the pace high and powered through the line, with Luis Romero Amaran (CUB) of Jamis-Hagens Berman p/b Sutter Home taking max points, followed by Nic Hamilton (CAN) of Jelly Belly p/b Kenda and David Lozano Riba (ESP) of Team Novo Nordisk.

Several attacks came early in the stage, including one from 2013 Tour de France Champion Chris Froome (GBR) of Sky Procycling, but nothing stuck. After reeling a big group in, the intact peloton reached the second Clif Bar Sprint Line of the day in Loveland, where Christopher Jones (USA) of UnitedHealthcare Pro Cycling Team crossed the line first, followed by Kirk Carlsen (USA) of Bissell Pro Cycling and Marsh Cooper (CAN) of Optum Presented by Kelly Benefit Strategies.

After one more unsuccessful break attempt, Michael Rogers (AUS) of Team Saxo-Tinkoff showed his strength once again and pulled away from the group. He was followed by several riders that would comprise Saturday’s main breakaway, including:

With the gap hovering around two minutes, the riders made it through the Feed Zone on the approach to the only Nissan King of the Mountains (KOM) competition of the day at Devil’s Gulch. Lined with enthusiastic, screaming fans at the top, Geschke crossed the line first, followed by Pires and Rogers.

From there, it would only be about five, mostly downhill miles until the third Clif Bar Sprint Line of the day in Estes Park, where Rogers zoomed over the line first to the cheers of waiting crowds, followed by Pires and Duarte.

As several riders tried to pull away from the peloton, but were quickly brought back in, the gap went down to just 1:20. As the race continued though, the gap would build once again. With the wind giving the riders a little help, speeds built back up to around 28 mph.

At about 22 miles until the end of the stage, things started to heat up. Cannondale continued to lead the front of the peloton, ensuring their sprinter Peter Sagan (SVK) would be ready for the final run into Fort Collins, and with that speedy tempo, the gap started to shrink.

Seizing the moment, two riders – Carlsen and Machado – attacked the break and were soon joined by Geschke and Duarte. But Geschke didn’t stop there and attacked the newly formed break of four with about 16 miles to the finish. Before long though, he was joined by several other riders, including Dekker, Edmonson, Rogers and Megias Leal.

As the remaining riders from the original break of 15 left in the second group got reabsorbed by the field, the situation consisted of the break out front, chased by Machado and Pires, followed by the field. With the break riding through a swarm of fans on the small, rolling, uncategorized hills leading to the slightly downhill finish in Fort Collins, Geschke went back to the field as well.

With about eight miles to go, a crash took down Andy Schleck (LUX) of RadioShack Leopard Trek and Tom Zirbel (USA) of Optum Presented by Kelly Benefit Strategies, but they were both able to recover and finish the stage.

With the end of the stage nearing, the peloton chased down the breakaway and began to set up for a fast, final sprint into Downtown Fort Collins. Teams started lining up their sprinters and sending them off the front, but in an all-out, intense sprint to the finish, 2013 Tour de France Green Jersey Winner Peter Sagan won the stage.

“Today I’d like to thank all my teammates, they did great work all day, especially in the front for the breakaway,” said Sagan. “All the riders from my team did their best. I’m very happy to have won this stage.”

The Denver Circuit takes the best parts of the 2011 and 2012 Denver stages and combines them into a new circuit. It still hits all the Denver highlights – LoDo, City Park and Civic Center Park. There isn’t a bad viewing spot. Watch for early breakaways…can they hold off the surging peloton? Watch the teams cue up and try to set up their sprinters…can they get to the front? Watch the last corner and see who has the nerve to take it the fastest and claim the final prize in the shadow of Colorado’s Capitol.

Fans can view the race on the daily NBC Sports Network and NBC broadcasts. Stage 7 will air live on NBC Sports tomorrow from noon to 2 p.m. MT and on NBC from 2 to 4 p.m. MT.

For full results go to the official race website www.prochallenge.com.

I was reading some of your content on this website and I conceive this internet site is really informative ! Keep on putting up. https://multinutri.shop/

All the contents you mentioned in post is too good and can be very useful. I will keep it in mind, thanks for sharing the information keep updating, looking forward for more posts.Thanks Laserontharing

That is very helpful for increasing my knowledge in this field. Spouwmuur isoleren

All the contents you mentioned in post is too good and can be very useful. I will keep it in mind, thanks for sharing the information keep updating, looking forward for more posts.Thanks Installateur zonnepanelen

They're produced by the very best degree developers who will be distinguished for your polo dress creating. You'll find polo Ron Lauren inside exclusive array which include particular classes for men, women. Ramen Oud-Heverlee

Truly, this article is really one of the very best in the history of articles. I am a antique ’Article’ collector and I sometimes read some new articles if I find them interesting. And I found this one pretty fascinating and it should go into my collection. Very good work! Muur isoleren

Thank you for your post, I look for such article along time, today i find it finally. this post give me lots of advise it is very useful for me. Ramen Wijchmaal

Great survey. I'm sure you're getting a great response. Ramen Wilsele

I feel very grateful that I read this. It is very helpful and very informative and I really learned a lot from it. EPS

Hi, I log on to your new stuff like every week. Your humoristic style is witty, keep it up Ramen Rotselaar

All the contents you mentioned in post is too good and can be very useful. I will keep it in mind, thanks for sharing the information keep updating, looking forward for more posts.Thanks Ramen Vlaams-Brabant

Your site is truly cool and this is an extraordinary moving article. Terrasoverkapping

Wow! Such an amazing and helpful post this is. I really really love it. It's so good and so awesome. I am just amazed. I hope that you continue to do your work like this in the future also Ramen Bertem