Racing on a 105.9-mile route from one iconic ski town to another – Breckenridge to Steamboat Springs -- Lachlan David Morton (AUS) of Boulder's Team Garmin-Sharp crossed the line with the peloton, holding onto the leader jersey heading into day four of the race. Stage 4 on Thursday will travel from Steamboat to Beaver Creek.

“It’s always amazing to see what these guys are capable of,” said Shawn Hunter, CEO of the USA Pro Challenge. “Between the stellar riding and the enthusiastic fans, this has been an incredible race so far. The crowds at the 2013 USA Pro Challenge continue to be humbling – we don’t get the crowds that we do out of luck, it’s because of the leadership in these communities and the remarkable racing from these world-class athletes.” 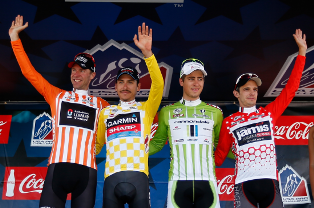 Left to Right: Jens Voight wins the Most Courageous rider, Lachlan Morton remains in the Yellow jersey, Peter Sagan holds on to the Green Sprint jersey and Matt Cooke stays in the KMO jersey.

Following an exciting and extremely competitive day of racing Tuesday, the Pro Challenge began Wednesday in Breckenridge at 9,400 feet. After completing three neutral laps around town, the riders began the downhill ride, hitting impressive speeds, to the first Nissan King of the Mountains (KOM) competition at Swan Mountain.

Under a blue sky filled with beautiful clouds, the race started with several attacks, but nothing stuck. With fans lining the tight switchbacks, the riders neared the top with attacks flying left and right. Edward King (USA) of Cannondale Pro Cycling pulled ahead and was followed over the top by Matt Cooke (USA) of Jamis-Hagens Berman p/b Sutter Home and Voigt.

Taking advantage of the climb, Joshua Edmonson (GBR) of Sky Procycling, Voigt, Villella, Tyler Wren (USA) of Jamis-Hagens Berman p/b Sutter Home and Serghei Tvetcov (MDA) of Jelly Belly p/b Kenda (USA) created a gap and pulled away from the peloton heading toward the first Clif Bar sprint of the day in Silverthorne.

With a downhill approach to the sprint line, the riders reached speeds of 50 mph as Tvetcov catapulted over the line to take maximum points, followed by Voigt and Wren.

At ages ranging from 21 to 41, the breakaway riders continued to work together through the Feed Zone heading toward the next Clif Bar sprint line of the day in Kremmling. Showing his power and speed, Villella crossed the line first, followed by Tvetcov and Voigt.

On a straight and long road to the finish, the break continued to increase the gap, which got up to five minutes at one point. At just more than three hours into the stage, Voigt pulled away from the other four in an attempt to set himself up for the stage win and after several hard days of racing, they just weren’t able to hang on.

Powering up the five-mile climb filled with fans who had been camping out all day, Voigt reached the top first, followed by his former breakaway companions Edmonson and Wren. Back in the peloton, the Jamis-Hagens Berman p/b Sutter Home riders ensured that current Nissan King of the Mountains Jersey wearer Cooke was set up to reach the top next to hang onto his lead.

On the descent, the chase was caught by the peloton, leaving only veteran rider Voigt out in front. But the final 10K would present a long, flat straight-away, where the peloton would have Voigt in their sights. With different teams taking turns at the front, they quickly brought the gap down and eventually caught Voigt.

“I was disappointed (about being caught), but it could have been worse,” said Voigt. “I gave it a go. I saw it coming a little bit, but I was still disappointed.”

The sprinters set up for the final dash to the line in Steamboat Springs and ultimately Sagan took the win, followed closely by Luka Mezgec (SLO) of Team Argos-Shimano and Ryan Anderson (CAN) of Optum Presented by Kelly Benefit Strategies.

“I’m very happy about my stage win today and I want to thank all my teammates because they did great work,” said Sagan. “For now I feel good and I think I can do well on these climbs.”

The jerseys remained almost unchanged with Morton retaining the Smashburger Leader Jersey and the Colorado State University Best Young Rider Jersey; Sagan holding onto the Clif Bar Sprint Jersey; and Cooke keeping the Nissan King of the Mountains Jersey. Voigt was awarded the FirstBank Most Courageous Rider Jersey for his amazing solo effort during the stage.

Stage 4 is the Queen Stage of the 2013 USA Pro Challenge. It features some previously used terrain, but with some added spice. One thing is for sure, the road to the final podium in Denver goes straight over Bachelor Gulch. A new start in Steamboat will send the race off onto new country roads around Routt County. This roller coaster of small hills gives way to a gentle route south until the racers have to climb up from the river bottom at State Bridge. That’s just the beginning, as the new approach to Beaver Creek will now send the racers up the new climb of Bachelor Gulch. It may not be the longest or most well-known climb, but it is quite possibly the toughest. The relentless grade with pitches up to 18 percent will do real damage and create the sort of epic racing for which the Pro Challenge is known. After Bachelor Gulch, the leaders still have to race down a technical descent and power up the final 2 km climb to Beaver Creek Village. By that time the winner may not even have the strength left for a victory salute.

Fans can view the race on the daily NBC Sports Network and NBC broadcasts. Stage 4 will air live on NBC Sports Thursday at 2 p.m. MT.