RealAspen News and Community Content Feed
By Real Vail
Real Aspen – August 19, 2013
The 2013 USA Pro Challenge started off with a bang as 128 riders, hailing from 31 countries, rolled out of Aspen to embark on a circuit race that would prove to pack a punch. After three 22-mile laps, with 3,080 ft. of climbing per lap, Peter Sagan (SVK) of Cannondale Pro Cycling pulled out the win after an all-out sprint to the finish.

“With the No. 1 and 2-ranked riders in the world racing in the 2013 USA Pro Challenge, we knew the competition would be tough, and Sagan really proved that today,” said Shawn Hunter, CEO of the USA Pro Challenge. “The crowds along the entire route in Aspen and Snowmass were unbelievable. The fans here are just so passionate about the sport. They blew all of my expectations out of the water.” 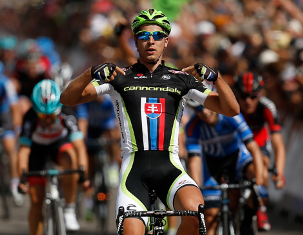 Comprised of three circuits that included a total of two Clif Bar sprint lines and four Nissan King of the Mountains competitions, the stage gave the riders a taste of what lies ahead over the next six days.

After two short, neutral laps through Aspen, the race got off to an exciting start with a seven-man breakaway. But the break would prove to be short lived, as they were caught again within the first three miles of the race.

The non-stop action continued though with an immediate counter-attack from Craig Lewis (USA) of Champion System Pro Cycling Team, Matt Cooke (USA) of Jamis-Hagens Berman p/b Sutter and Ian Burnett (USA) of Jelly Belly p/b Kenda within the first 30 minutes of the race that stuck for most of the stage.

As the cyclists began lap two, the competition started heating up with sprint and King of the Mountains (KOM) points on the line. At the first Clif Bar sprint line, which was at the end of the first circuit in Downtown Aspen, Burnett crossed the line first, followed by Lewis and Cooke. As the race rolled on and the gap continued to grow, the riders approached the first Nissan KOM competition in Snowmass (Cat. 4) where Cooke made it to the top first, followed by Lewis then Burnett. The second Nissan KOM of the day at McLain Flats (Cat. 4), which was 14.5 miles into the second circuit, saw repeat results.

Heading into the final lap of the day, with the break still intact, the second sprint in Aspen saw Lewis cross the line first, followed by Burnett and Cooke. With the pressure building, the peloton started closing the gap with Cannondale Pro Cycling leading the chase through town to the roaring cheers of fans lining the route.

Quickly approaching the third Nissan KOM of the day, again in Snowmass, Cooke pulled away from his breakaway companions to make it to the top first, followed by Burnett, then Lewis. At just under 10 miles from the finish, and RadioShack Leopard Trek setting the pace, the chase was on and the peloton began closing in on the break. One by one the three riders were swallowed back up into the field, but just prior to that, Cooke claimed the last Nissan KOM competition, followed by Lachlan David Morton (AUS) of Team Garmin-Sharp and Chris Baldwin (USA) of Bissell Pro Cycling.

Just as Cooke was caught, a follow-up attack was made by seven riders, which quickly dwindled to two – George Bennett (NZL) of RadioShack Leopard Trek and Carter Jones (USA) of Bissell Pro Cycling. With just more than half a mile to go, BMC Racing Team led the chase trying to set up for the sprint finish, but in the end Sagan turned up the gas and crossed the finish line first.

“I’m very happy. I’m thankful for my teammates and the support from the fans,” said Sagan. “I felt good today. I came here two weeks ago to adjust to the altitude and I think it really helped me prepare for the race.”

In a near sweep of the jerseys Sagan took the Smashburger Leader Jersey, Clif Bar Sprint Jersey and Colorado State University Best Young Rider Jersey. Cooke was awarded the Nissan King of the Mountains Jersey. The FirstBank Most Courageous Rider Jersey went to Lewis after riding in the break for most of the day.

While much of the Stage 2 course has been used in previous years, 2013 will mix things up by taking the riders in different directions, creating a unique new stage. The familiar battleground of Independence Pass will be anything but easy as riders ascend the 12,000 ft. climb, the highest point reached in any professional cycling race. Then they’ll continue on through some familiar spots as the race zooms through Buena Vista, Fairplay and Alma, before tackling Hoosier Pass from the south this year. But it’s not over until it’s over, so before crossing the line, the riders will have to conquer the nasty 15 percent grade of Moonstone Rd. in the heart of Breckenridge, before bombing down Boreas Pass to the waiting crowd.

Fans can view the race on the daily NBC Sports Network and NBC broadcasts. Stage 2 will air live on NBC Sports Tuesday at 2 p.m. MT.

For more details go to the official race website www.prochallenge.com.