The seven-stage race starts with a grueling loop consisting of three 22-mile laps (66 miles total) and 3,080 feet of climbing per lap with minimal recovery time. The Pro Challenge comes to Beaver Creek on Thursday with a 102.9-mile Stage 4 romp that starts in Steamboat Springs.

Then Stage 5 on Friday marks the return of the old Coors Classic Vail Pass Time Trial. Finally, the race concludes Sunday in Denver. Froome has been enjoying some much-needed downtime since winning the 100th Tour de France last month, but his team is ready to compete in the Pro Challenge, despite the huge jump in altitude.

“It’s been quite a pleasant surprise coming over here, and a major adjustment in terms of the altitude,” Froome said at a recent press conference in Aspen. “You feel better as the days go on, but it adds a whole new dimension to the race. I’ve never done a race at this kind of altitude before.

“This race is really important to us and we’ve brought a strong team to be as competitive as we possibly can.”

Defending champ Vande Velde, who’s retiring after this season, said this race is special to him. 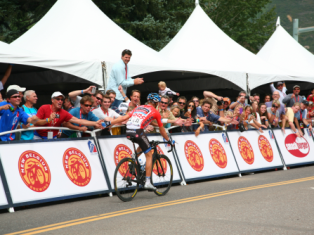 “This race is easily head-and-shoulders above all races and closest to my heart,” Vande Velde said. “From the fans to the epic climbs, I couldn’t imagine a better race to be my last in the United States. I think it’s so special and I can’t wait to see how many people come out this year to support.”

His teammate, Tom Danielson, went to school in Durango and lives in Boulder. He won last year’s stage in Aspen.

“On Team Garmin-Sharp we always win as a team and lose as a team … that one was really a team effort,” Danielson said. “The stage into Aspen from Gunnison was one of the top experiences I’ve had in the history of my professional career. I got to go over Independence Pass by myself in my hometown, in front of tons of fans and then almost lost it all, but dug as deep as I could to pull out the win.

“The crowd really helped me through it. It was really a magical moment coming through the finish line. I couldn’t even raise my hands because it was so emotional.”

For three years now, Tejay van Garderen of the BMC Racing Team has been considered a pre-race favorite. The Boulder resident also has Aspen ties.

“My wife grew up in Aspen,” he said. “We love it here. We’re making Aspen a bit more permanent.”

As for the race, he’s once again in it to win, but expects the competition to be even tougher this year.

“We’re definitely taking this race seriously,” van Garderen said. “We brought a really strong team and we’d like to win it … that’s the ultimate goal. We’re obviously going to face some stiff competition with all these people sitting around me [referring to the other riders at the press conference] participating this year.”

For more information on the USA Pro Challenge, go to the official website.

I will really appreciate the writer's choice for choosing this excellent article appropriate to my matter.Here is deep description about the article matter which helped me more. Isolatiechape

I am always searching online for articles that can help me. There is obviously a lot to know about this. I think you made some good points in Features also. Keep working, great job ! Vloerisolatie

I am really enjoying reading your well written articles. It looks like you spend a lot of effort and time on your blog. I have bookmarked it and I am looking forward to reading new articles. Keep up the good work. Chape

Excellent Blog! I would like to thank for the efforts you have made in writing this post. I am hoping the same best work from you in the future as well. I wanted to thank you for this websites! Thanks for sharing. Great websites! Isolerende mortel

This is truly an practical and pleasant information for all. Thanks for sharing this to us and more power Vloer isoleren

I wish more writers of this sort of substance would take the time you did to explore and compose so well. I am exceptionally awed with your vision and knowledge. Chapewerken

Good to become visiting your weblog again, it has been months for me. Nicely this article that i've been waited for so long. I will need this post to total my assignment in the college, and it has exact same topic together with your write-up. Thanks, good share. Isolatie vloer

Thumbs up guys your doing a really good job. Isolatiemortel

Nice blog. Found this while searching through Chapes

this blog was really great, never seen a great blog like this before. i think im gonna share this to my friends.. Aanleggen zwembad

This is very useful post for me. This will absolutely going to help me in my project. Aanleg zwembad