“When I was 14 I tore up my knee playing ball and I had my first of what has turned out to be 37 orthopedic operations,” Walton said by phone recently. “When I was 21 playing for UCLA I had a terrible fall. I broke my spine and I fought it and I did everything I could to keep going, but with the bad feet, the bad knee and a broken spine, it all just kept building up and finally in ’07 I could no longer move and I could no longer get up off the ground.”

An ESPN basketball analyst with an oversized personality and a penchant for upbeat, colorful and sometimes controversial commentary, Walton saw it all fall apart six and a half years ago when his spine “failed and collapsed."

Over the next two years, the now 60-year-old counterculture hoops hero from the 70s who’s attended (by his estimate) 835 Grateful Dead shows says he actually would have been grateful to be dead.

“I spend hours every day on the phone, face to face and on the internet with people convincing them that there is a better way back into the game of life because suicide is a huge problem with spine patients,” said Walton, who’s now an unpaid spokesman for The Better Way Back, a nonprofit patient support and education program funded by NuVasive. 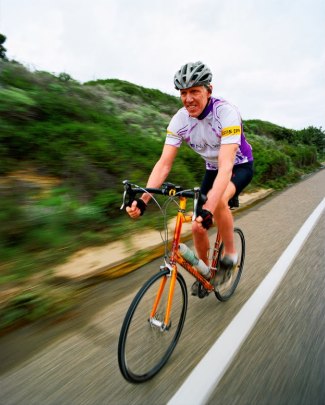 NBA Hall of Famer Bill Walton will spend some time "in church" when he visits Vail this weekend. That's what he calls his road bike after spine surgery returned him to full mobility.

In February of 2009, after two years of trying everything from acupuncture to spinal injections with no success, Walton had a relatively new surgical procedure called XLIF (eXtreme Lateral Interbody Fusion) that restored full mobility and returned him to a pain-free life with no medication. ESPN brought him back last season as an analyst for Pac-12 college games.

From 5 to 6:30 on Friday, Walton and Vail-Summit Orthopaedics spine surgeon Dr. Greg Poulter, who performs the XLIF procedure, will hold an educational forum at the Shaw Cancer Center at 322 Beard Creek Road in Edwards. Walton says anyone suffering back pain should attend to find out about their surgical options, but he also said the free event will be a celebration of renewed opportunities in life, and he’ll sign memorabilia, pose for photos and talk sports.

“With success, with privilege comes responsibility, duty and opportunity,” said Walton, who notes that approximately 70 percent of the population experiences some kind of back pain at some point in their life and that more than 10 million Americans suffer from chronic back pain. “Because I’ve gotten all better, I have a responsibility [to educate and advocate].”

Poulter, who did not perform Walton’s surgery but is among an estimated 10 to 15 percent of spine surgeons nationwide performing XLIF, says spine surgery suffers from a very bad reputation because of outdated technology and techniques.

The work on the spine itself remains largely the same, it’s all about how the spine is accessed with XLIF, Poulter adds.

Walton had debris cleaned up in and around his spine, his spine was straightened, pressure was taken off the nerves that were being compressed and causing him leg and back pain, and then his spine was stabilized with screws, rods, a cage and spacers.

To do all that, surgeons went in through his side instead of making massive, foot-long incisions either on his back, which would have required cutting muscle and a lengthy recovery, or his abdomen, which means moving intestines, the aorta and other internal organs.

“The problem with spine surgery is oftentimes you would do more damage than good,” Poulter said. “Sure, the spine would be fixed, but people would be so weak from having the large abdominal incision or a big incision down their back that they wouldn’t get that much better.”

Because of mixed results in the past, Poulter said many people suffering from debilitating back pain wouldn’t even consider surgery.

“I’m not necessarily trying to sign people up but just let them know that if they get to a point where maybe others have told them they can’t be helped, there’s a chance they could be helped, and if you can take someone who was in Bill Walton’s situation and turn it around for them where they can be active again, that’s a big reason why we all go into medicine is to try to help people out.”

Poulter compares XLIF to the revolution in knee surgery 20 years ago when doctors went from opening up the knee with a big incision and flipping back the kneecap to going in and doing everything arthroscopically. XLIF uses a retractor, or a small tube that allows surgeons to go in through the side and work on the spine, fusing discs and unpinching nerves.

“Vail’s always been very strong in sports medicine, and my hope is that throughout my career here Vail also gets to be known as a place where you have good back care as well,” Poulter said. “Historically these kinds of procedures have not been done in Vail, and we’re looking to change that.”

Walton says Vail is perfect place to share his story and spread the love.

“When we come to Vail it’s this incredible center of health and success, happiness, beauty, joy, optimism -- all the things that when you’re healthy you take for granted,” Walton said. “But when you’re on that ground and you can’t move and even if you are in Vail, your life is miserable. It’s over.

“The beautiful thing about my trip [to Colorado] this time is how it pulls it all together in terms of the drive and the dream of athletics and active participation in the game of life in conjunction with my ability to play in the game of life one more time because I’ve got a second chance.”

I'm looking for and want to comment "The main points of your post are great" Good job! My site: เล่นบาคาร่าตอนนี้

It’s very informative and you are obviously very knowledgeable in this area. You have opened my eyes to varying views on this topic with interesting and solid content. Zwembad aanleggen

Awesome blog. I enjoyed reading your articles. This is truly a great read for me. I have bookmarked it and I am looking forward to reading new articles. Keep up the good work! Premies zonnepanelen

I read a article under the same title some time ago, but this articles quality is much, much better. How you do this.. Zwembad aanleggen

Glad to chat your blog, I seem to be forward to more reliable articles and I think we all wish to thank so many good articles, blog to share with us. Zonnepanelen

The material and aggregation is excellent and telltale as comfortably. Zwembad aanleggen

You have done a amazing job with you website Zonnepanelen installatie

I don t have the time at the moment to fully read your site but I have bookmarked it and also add your RSS feeds. I will be back in a day or two. thanks for a great site. Laserontharing

Good to become visiting your weblog again, it has been months for me. Nicely this article that i've been waited for so long. I will need this post to total my assignment in the college, and it has exact same topic together with your write-up. Thanks, good share. Qcells zonnepanelen

Going to graduate school was a positive decision for me. I enjoyed the coursework, the presentations, the fellow students, and the professors. And since my company reimbursed 100% of the tuition, the only cost that I had to pay on my own was for books and supplies. Otherwise, I received a free master’s degree. All that I had to invest was my time. Longi zonnepanelen

This post is very simple to read and appreciate without leaving any details out. Great work! Zwembad plaatsen

Really nice and interesting post. I was looking for this kind of information and enjoyed reading this one. Longi Solar zonnepanelen

Thanks for posting this info. I just want to let you know that I just check out your site and I find it very interesting and informative. I can't wait to read lots of your posts. Thuisbatterij

It proved to be Very helpful to me and I am sure to all the commentators here! REC zonnepanelen

Here at this site really the fastidious material collection so that everybody can enjoy a lot. Sunpower zonnepanelen

I was very pleased to find this site.I wanted to thank you for this great read!! I definitely enjoying every little bit of it and I have you bookmarked to check out new stuff you post. Belinus zonnepanelen

Thank you so much for providing such great information. I will definitely tell others about this. By the way, I also want to tell you about Penalty Shooters 2 which is my passion lately.

Thanks for your helpful information. I have been struggling to find many questions about this issue. I will follow you! [url=https://cookieclicker-unblocked.com]cookie clicker unblocked[/url]

Wow, this is fantastic. This is, in my opinion, one of the best blog articles ever published. Your work has a great level of excellence. It's greatly valued
cookie clicker unblocked

For the consumer model, they are considering a higher quality OLED display, 카지노사이트

토토 This is very informative. Thank you very much.

안전토토 This is very informative. Thank you very much.

먹튀 This is very informative.

먹튀 This is very informative. Thank you very much.

먹튀검증 This is very informative. Thank you very much.

I used to be recommended this web site by my cousin. I’m no longer sure whether this put up is written via him as nobody else know such exact approximately my problem. You’re amazing! Thank you! terraria

blog soon but have no coding knowledge so I wanted to get advice from someone with experience. Any help would be enormously appreciated! 식스 접속주소 먹튀검증을 통한 안전한 토토 사이트

This kind of clever work and reporting! Keep up the very good works guys I ve added you guys to our blogroll. 벳존 접속주소 먹튀폴리스 검증업체를 통해 안전한 카지노사이트