The Peak 6 project will include 400 acres of lift-served skiing and 143 acres of hike-to terrain. The company expects to open the new terrain for the 2013-14 ski season, including adding a new high-speed, six-person chairlift and a new fixed-grip chairlift to access the Peak 6 area.

“This is one of the most notable ski area enhancements in the past decade,” said Rob Katz, chairman and CEO of Vail Resorts. “The new expanded terrain will feature high-alpine, intermediate bowl skiing – a rare find among our eight world-class resorts and in North America. This is an exciting season on the horizon for Breck and our company.” 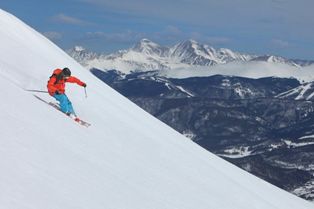 The projected opening day for the Peak 6 lifts and terrain will be announced early during the winter season as construction comes to a conclusion and the snow begins to fly. Visit www.breckenridge.com for the latest on the Peak 6 project.

Peak 6, located within Breckenridge Resort’s special use permit boundary, is the first ski terrain expansion on National Forest System land in Colorado since 2008 and the first at Breckenridge since the Peak 7 expansion in 2002.

The blog and data is excellent and informative as well Laserontharing

Super site! I am Loving it!! Will return once more, Im taking your food likewise, Thanks. Warmtepompen Oost-Vlaanderen

Super site! I am Loving it!! Will return once more, Im taking your food likewise, Thanks. Warmtepompen Oost-Vlaanderen

The blog and data is excellent and informative as well Laserontharing

This article gives the light in which we can observe the reality. This is very nice one and gives indepth information. Thanks for this nice article. Ontharing permanent

Wonderful illustrated information. I thank you about that. No doubt it will be very useful for my future projects. Would like to see some other posts on the same subject! Ramen en deuren plaatsen

Wow what a Great Information about World Day its exceptionally pleasant educational post. a debt of gratitude is in order for the post. Spouwisolatie

This post is good enough to make somebody understand this amazing thing, and I’m sure everyone will appreciate this interesting things. Ramen en deuren plaatsen

I must say, I thought this was a pretty interesting read when it comes to this topic. Liked the material. . . . . Ramen Vlaams-Brabant

This is a smart blog. I mean it. You have so much knowledge about this issue, and so much passion. You also know how to make people rally behind it, obviously from the responses. Isolatie muur

Truly, this article is really one of the very best in the history of articles. I am a antique ’Article’ collector and I sometimes read some new articles if I find them interesting. And I found this one pretty fascinating and it should go into my collection. Very good work! Zonnepanelen installateurs Oost-vlaanderen

This is a wonderful article, Given so much info in it, These type of articles keeps the users interest in the website, and keep on sharing more ... good luck. Zwembad tuin

Took me time to read all the comments, but I really enjoyed the article. It proved to be Very helpful to me and I am sure to all the commenters here! It’s always nice when you can not only be informed, but also entertained! Vakantiehuis Limburg huren

I have to search sites with relevant information on given topic and provide them to teacher our opinion and the article. Zonnepanelen