RealAspen News and Community Content Feed
By Real Vail
Real Aspen – June 19, 2013
A stolen bronze sculpture of a golden retriever was found in Gore Creek in Vail on Tuesday.

The sculpture, stolen June 3 while on display in front of Cogswell Gallery, at 223 Gore Creek Dr. in Vail Village, was recovered by the gallery manager, Jason Leach. 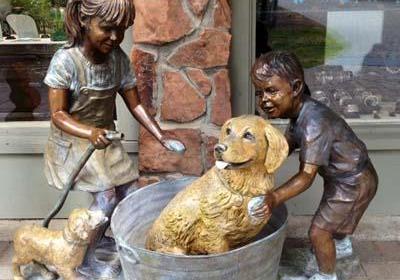 Leach, who has been on constant lookout for the dog, said the recent drop in water volume increased visibility and aided in his search.

Submersion amongst the rocks damaged the artwork’s appearance, and because it was full of sediment, Leach told police he has concluded the sculpture had been in the creek since it was taken.

While restoration is in the works, Leach said it is great to have the dog back in its rightful place -- at the center of the fountain for everyone to enjoy.

Vail Police are still investigating this crime. Anyone with information regarding this incident is asked to contact the Police Department at (970) 479-2200, and they can remain anonymous.

I used to have a dog that ran away all the time, too. Sometimes you just can't control 'em. Probably some female bronze dog in heat out yonder 'cross the River.

This is really an awesome sculpture which every one admires. All the retriever and kids around it are so adorable. Well I was here in checking is boom essays legit and got through this wonderful sculpture. I really love canines since my childhood.

The solvent controls the drift and application of the paint. It’s combined into the paint, generally with a brush, to dilute it to the right viscosity, or thickness, before it’s implemented to the surface.
Kirsty Black

When students go through speedypaper reviews they can hire the best essay writing experts who help them with the best quality assignments. The experts have been working in the industry for years, provided the students choose experienced experts

Thanks for such a great post and the review, I am totally impressed! Keep stuff like this coming. emergency dental care

I would also motivate just about every person to save this web page for any favorite assistance to assist posted the appearance. donna karan sunglasses

Thanks for such a great post and the review, I am totally impressed! Keep stuff like this coming. free chat

I don’t think many of websites provide this type of information. smm

Really nice and interesting post. I was looking for this kind of information and enjoyed reading this one. deliverance ministry

Amazing knowledge and I like to share this kind of information with my friends and hope they like it they why I do. gefälschter führerschein kosten

I am overwhelmed by your post with such a nice topic. Usually I visit your blogs and get updated through the information you include but today’s blog would be the most appreciable. Well done. how-to-make-rick-simpson-oil-rso-20-grams

Thanks a lot for one’s intriguing write-up. It’s actually exceptional. Searching ahead for this sort of revisions. NY weed shop

Thanks for your post. I’ve been thinking about writing a very comparable post over the last couple of weeks, I’ll probably keep it short and sweet and link to this instead if thats cool. Thanks. RD Service

I have read your article, it is very informative and helpful for me.I admire the valuable information you offer in your articles. Thanks for posting it. health insurance for foreigners in china

This is a great post. I like this topic.This site has lots of advantage.I found many interesting things from this site. It helps me in many ways.Thanks for posting this again. MERNstackers

What a wonderful story! It is heartwarming to hear that a beloved bronze sculpture of a golden retriever was found safe in Gore Creek real estate agent Otto in Vail after it was stolen earlier this month. We are so grateful to Jason Leach, the gallery manager, for his successful efforts in recovering the sculpture. It's amazing that he was able to find it in the creek!