RealAspen News and Community Content Feed
By Real Vail
Real Aspen – October 4, 2010
Skiers and snowboarders will be soaring into the nighttime sky in downtown Denver this January off one of the biggest man-made ramps ever constructed. The Metro Denver Sports Commission, Mayor John Hickenlooper and officials from the U.S. Ski and Snowboard Association (USSA) announced Monday that Denver Big Air presented by Sprint will come to Civic Center Park on Jan. 25 and 26. 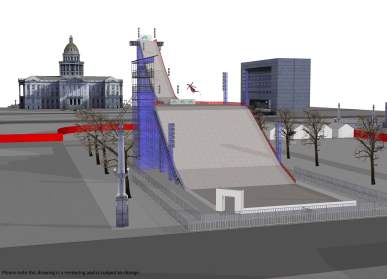 Rendering of the ramp to be erected in Denver's Civic Center Park in January.

Denver Big Air presented by Sprint, a two day international ski and snowboarding event, will kick off the huge SnowSports Industries America Snow Show. The event opens with the Nature Valley Big Air Challenge, a skiing big air event on Tuesday, Jan. 25 featuring some of the best male skiers in the country. Day two, Wednesday, Jan. 26, action will feature the International Ski Federation's (FIS) LG FIS World Cup Snowboard Big Air, a sanctioned event on the established global snowboarding circuit with an international roster of the top male snowboarders from around the world.

The event will be broadcast nationally on NBC and Versus.

“Denver Big Air will offer everyone a great chance to share in a weeklong celebration of winter sports right in the heart of Denver,” Mayor John Hickenlooper said. “We are excited to have this spectacular winter sporting event in Civic Center Park at the time thousands of winter sports fans are attending the SIA Snow Show at the Colorado Convention Center.”

“It is the first time for this event in the United States on a ramp this size and with the setting in Civic Center Park, you won't be able to miss it,” said KieAnn Brownell, President of the Metro Denver Sports Commission. “This is a great event for Denver and we love having the opportunity to work with FIS and USSA to bring winter sports to the heart of downtown.”

The LG FIS World Cup Snowboard Big Air has been held in Moscow, Barcelona, Quebec, Seoul and London and is making its first stop in the United States. The FIS' selection of Denver as the first U.S. host city fits in its strategy of iconic locations for its signature ramp. The ramp is a combination of the steel truss and scaffolding that will be 101 feet high, 300 feet long and 80 feet wide. The structure has been designed by Populous, a Denver based venue designer and event overlay firm with credentials that span from the Olympics to the FIFA World Cup.

To complement the snowboarding action, the U.S. Ski and Snowboard Association, the national governing body for the sport in the U.S., will add the Nature Valley Big Air Challenge, a big air ski event to the mix to kickoff two-night stand on Tuesday, Jan. 25. Denver's own Bobby Brown, the reigning X Games big air champion, was on hand for the announcement.

“This is a very unique opportunity for the USSA to bring two of our key sports to the heart of a great American city like Denver,” said USSA President and CEO Bill Marolt. “Denver is the right market for a lot of reasons. It gives us the opportunity to showcase to a winter committed community and to the entire snowsports industry with the SIA Snow Show” and to provide an opportunity for our partners Sprint and Nature Valley."

The Denver Big Air will be presented by Sprint, an active USSA partner for nearly two decades. The event is also a natural extension of Sprint's engagement with major Colorado resort partners including Vail Resorts, Aspen/Snowmass, and Intrawest and will be used as a platform to help promote Sprint's upcoming 4G service launch in Denver.

"The intense action of a spectator event like the Denver Big Air is a great matchup for Sprint," said Angie Lovett, Sprint Director of Corporate Sponsorship Marketing. "Sprint has a long history of pioneering events like this with the USSA and is proud to be a part of the Denver Big Air to help promote Sprint's service in Colorado."

It is also is the cornerstone of the Mile High Snowfest, a week of winter themed activities centered around the SIA Snow Show, one of the biggest industry trade shows in the world. The SIA Snow Show brings nearly $30 million dollars and 20,000 visitors to the city and is in Denver through 2020. The Snow Show has the largest, most concentrated and authentic trade event in the snow sports industry.

Step 1: Make a list of keywords that make a high keyword density in your content. Choose keywords with commercial target. When visitors use these keywords to make a search, and if your website keyword content matches with the query, then there are chances for getting your website indexed by the search engines. 꽁나라 문자인증

Hi there, I found your blog via Google while searching for such kinda informative post and your post looks very interesting for me. 토토사이트