“The National Wildlife Federation earlier this year released a report really documenting the impacts of spills onshore, and they're pretty staggering,” Gale said. “They make the BP incident [in April in the Gulf of Mexico] look like a really rare and isolated event. 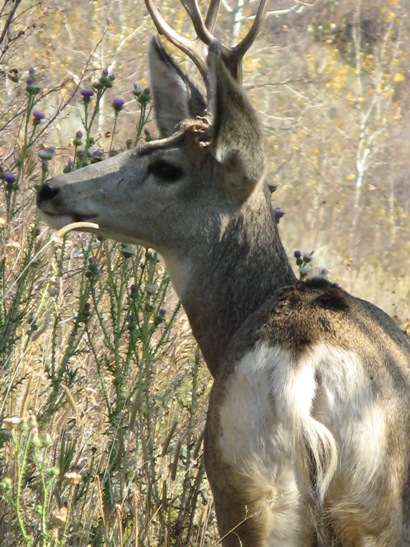 A young buck in West Vail last week.
By David O. Williams
“Here in Colorado the Colorado Oil and Gas Conservation Commission [the state agency that oversees oil and gas drilling] has documented approximately 1,600 spills just between 2003 and 2008, so we're looking at a pretty important issue to focus our energy on as we look at the ways that oil and gas is developed on public lands,” Gale added.

Tisha Schuller, president of the Colorado Oil & Gas Association, told the Colorado Independent in a prepared statement that the industry here generally agrees that environmental protection is a top priority for its member companies.

“The oil and gas industry in Colorado has adapted to the most stringent set of state regulations in the country [amended and enacted in 2009]. Because we live and raise our families in the same communities within which we work, environmental protection is a tremendous priority for our companies and our employees,” Schuller said.

The new bipartisan NFW poll was a telephone survey of 462 Coloradans of different backgrounds and political persuasions. It asked the respondents to choose between two statements.

“We poll for Democrats in partisan races,” said Dave Metz of the public opinion research firm Fairbank, Maslin, Maullin, Metz & Associates, “and we partnered with Public Opinion Strategies, which polls for Republicans in partisan races, to make sure that the research had a bipartisan perspective.”

Despite ongoing research indicating a majority of Coloradans want more regulation of the state's natural gas industry, not less, Republican gubernatorial candidate Dan Maes continues to insist the state needs to roll back the amended and environmentally more stringent drilling regulations. GOP candidates have consistently blamed the regulations for the ongoing natural gas bust in the state, although many industry observers attribute the downturn to the recent global recession.

In his first television ad that began airing Friday, Maes says, “We need to start by rolling back the job-killing regulations that forced the energy industry out of our state.”

Democratic candidate and Denver Mayor John Hickenlooper has said he thinks some of the regulations should be tweaked but that he does not favor a complete overhaul of the new rules.

The NFW's Gale said the 1 million members of his organization will be heartened by the sentiments of Coloradans who value protecting critical wildlife habitat in the face of growing demands for domestic energy production.

“I've got a 15-month-old daughter that I have to look in the eyes at the end of the day to say that I did everything I could to give her the same opportunities I've had on public lands, whether she decides to hunt and fish or not,” Gale said. “She deserves the right to go catch a brook trout in the same little stream where I learned to catch a brook trout.”

Gale also pointed to an August deal between the state, environmentalists and nine major oil and gas producers agreeing to comprehensive wildlife mitigation plans in Northwest Colorado. Announced by Gov. Bill Ritter, Gale said the accord shows how much Colorado values protecting its natural heritage even as energy demands grow.

Here are the statements presented to respondents in the NWF telephone survey:

33 percent agreed with this statement:

The oil and gas industry continually strives to build upon its record of safety and to develop the advanced technology necessary to supply Americans with the energy they need -- safely, efficiently and with the least environmental impact possible. Adding new regulations or slowing down permitting will only end up costing jobs and raising prices.

62 percent agreed with this statement:

Oil and gas drilling can be done safely, but not if we simply trust oil and gas companies to police themselves. Whether drilling occurs in our oceans or here in Colorado, accidents happen. In fact, in Colorado there have been nearly 1,000 spills and accidents since 2008. It's simply common sense to end industry shortcuts and require careful, independent review to hold oil companies accountable before permitting drilling.

34 percent agreed with this statement:

The oil and gas industry continually strives to build upon its record of safety and to develop the advanced technology necessary to supply Americans with the energy they need - safely, efficiently and with the least environmental impact possible. Adding new regulations or slowing down permitting will only end up costing jobs and raising prices.

62 percent agreed with this statement:

We can no longer allow oil and gas companies to decide for themselves whether or not to use the best equipment or safest drilling practices. We've seen what happens when safety decisions are left to the companies in the Gulf of Mexico. Here in the West, we've seen drinking water contaminated with cancer causing chemicals. It's time to hold the oil and gas industry accountable and make sure drilling practices are mandatory rather than voluntary.

0 Comments on "Poll: Coloradans say energy industry can't be trusted to police itself"