And a related survey found that while most Eagle residents still prefer detached, single-family homes, 37 percent said they would trade living in a single-family home for attached housing in order to be in or near downtown.

“People in the Rockies want it all: easy access to the outdoors and recreation, plus the activity and convenience of living in town and being able to walk to shops and restaurants,” said Clark Anderson, the Sonoran Institute western Colorado program director based in Glenwood Springs. 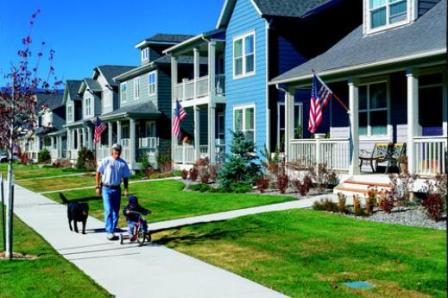 Eagle Ranch in Eagle is an example of increasingly popular "compact walkable community" development, according to a new study (East West Partners photo).

“Many communities in the Rockies have the potential to offer both, but there isn’t really a lot of housing product that responds to this demand – it’s a largely untapped market.”

In the six communities studied, the average price per square foot for what the Sonoran Institute deems “compact, walkable development (CWD)” was 18.5 percent higher than other types of housing between the years 2000 and 2009. That figure was 5.5 percent higher in Eagle.

The findings weren’t particularly surprising to Jen Wright, a longtime Vail Valley developer who worked closely with Eagle officials during the planning stages for the Eagle Ranch subdivision south of town. Built by East West Partners, Eagle Ranch has won awards for its access to community amenities and its overall design.

“People prefer to be in a community that’s well-planned and well thought-out, and generally values are greater in those types of communities than where there’s little zoning and people don’t know what’s going to happen in their neighborhood,” Wright said.

“In these planned unit developments (PUDs), you generally do get a higher value for it if they’re integrated with transportation and civic uses and so forth.”

Eagle Ranch was laid out in the 1990s on a neo-traditional grid of city blocks and alleys to mirror the old downtown core of Eagle. But developers then maintained green space through the heart of the subdivision and located a school, recreation center, town park and pavilion within easy walking or biking distance of the majority of residents. The subdivision is also interlaced with both paved and dirt hiking and biking trails, as well as an 18-hole public golf course.

“It’s very important for people to have in their comprehensive land-use plans that towns are walkable and that you accommodate both pedestrians and bicyclists,” said Eagle Town Manager Willy Powell, who worked closely with developers during the planning stages of Eagle Ranch in the 1990s.

“In a growth community like Eagle, you want to have separated paths, you want them to not be too much in conflict with vehicular traffic patterns; you want the paths to connect to your important nodes, not just within the subdivision but to other community facilities – your schools, your libraries, your commercial districts,” added Powell, the longest tenured town manager in the state of Colorado. “Our experience here in Eagle is that subdivisions are much more popular when you address those items.”

In fact, the Sonoran survey found that residents of the Rocky Mountain West placed a much higher priority on living within walking distance of other places and things to do in their community than the national average. A full 90 percent of Sonoran respondents felt walkability was important or very important compared to 66 percent nationally.

And 96 percent of those surveyed by the Sonoran Institute cited the exercise and health benefits or walkability as being important or very important.

Eagle Ranch, which connects to old Eagle but is otherwise surrounded by Bureau of Land Management federal land, has been lauded in recent years as both a road and mountain-biking destination – not just in Eagle County but for visitors from around the state.

Powell said community surveys in 2004 and 2007 confirmed that walking, hiking and biking were the top recreational activities in the town. By surrounding the subdivision with town open space and requiring an extensive trail network, the town was able to meet those needs and provide easy access to an extensive trail system on nearby public lands.

The Sonoran study goes on to catalog a number of qualities found in compact, walkable developments that residents of Eagle and the five other communities found desirable. However, the study also indicates there’s a lack of such housing around the West. Sixty percent of survey respondents felt they had few or very few options that reflected their needs and preferences.

I am Harry Winks from the United Kingdom also passionate rider and have two bikes in good condition currently I am not able to ride any of them due to busy in providing https://payforessay.net to students with the other team members who are also professional in writers.

Hello there, I found your web site via Google while looking for a related topic, your web site came up, it looks great. I’ve bookmarked it in my google bookmarks. termite inspections

I am out of words after working with Caldwells. They really give what their customers need. If you are in need of fine doors, https://caldwells.com/ their site here.

Great stuff from you, man. Ive read your stuff before and youre just too awesome. I love what youve got here, love what youre saying and the way you say it. You make it entertaining and you still manage to keep it smart. I cant wait to read more from you. This is really a great blog. field service automation

Eagle residents will likely pay more for homes in developments that are considered walkable, or pedestrian friendly. This is because walkable neighborhoods are often seen garage door installation santa ana as being more desirable, and thus, command a higher price. Additionally, homes in walkable developments tend to appreciate at a higher rate than those in less walkable areas. Therefore, if you are considering buying a home in Eagle, be prepared to pay more for a home in a walkable development.

Can I merely say thats a relief to find somebody that really knows what theyre discussing on-line. You certainly discover how to bring an issue to light and make it critical. The diet have to check this out and understand this side of your story. I cant believe youre less common when you certainly develop the gift. tucson pest control