RealAspen News and Community Content Feed
By Real Vail
Real Aspen – February 6, 2013
Vail's Lindsey Vonn issued a statement on Wednesday -- a day after blowing out her right knee at the World Championships in Schladming, Austria -- saying she'll "work as hard as humanly possible to be ready to represent my country next year in Sochi."

Sochi, Russia, is the site of the 2014 Winter Olympic Games, where NBC had already started billing Vonn as one of the stars of the Games. Now the Ski and Snowboard Club Vail product is headed home for surgery at the Steadman Clinic.

Dr. Tom Hackett, team doctor for the U.S. Ski Team and a surgeon at the Steadman Clinic, told AP Vonn is facing six to eight months before she'll be back on skis and able to start training. 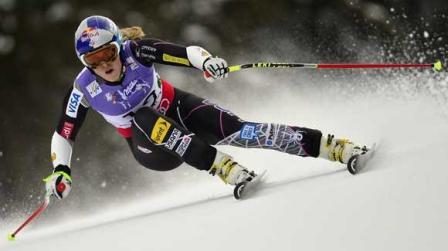 Dr. William Sterett of Vail-Summit Orthopaedics, who's been Vonn's surgeon since she was a young racer, told the AP on Wednesday that he'll operate on the 28-year-old next week.

A women's World Cup super-G and downhill are scheduled for December on the new women's speed course adjacent to the men's Birds of Prey course in Beaver Creek. The Winter Olympics are scheduled for February in Russia.

"First off I want to say thank you to the amazing medical staff that cared for me," Vonn said Wednesday in a prepared statement. "I plan on returning to Vail as soon as I can to have the necessary surgeries.

"I am also grateful to my fans for the outpouring of support, which has really helped me stay positive. I can assure you that I will work as hard as humanly possible to be ready to represent my country next year in Sochi."

Vonn has a sponsorship deal with Vail Resorts that includes being the pacesetter for Lindsey Vonn's EpicMix racing that replaced NASTAR at all of Vail's ski areas this season.

Vail officials have yet to release a statement regarding Vonn's injury in the super-G at Worlds on Tuesday.

Your article always include many of really up to date info. Where do you come up with this? Just stating you are very inspiring. Thanks again diary app for mac

As for Morgan Freeman, he was hardly there in the film. make money online

What would be your next topic next week on your blog.”,’”* mississippi home insurance

Well done! I appreciate your blog post to this matter. It has been insightful. my blog: how to get rid of love handles wholesale dog supplies

There are actually lots of particulars like that to take into consideration. That may be a nice level to bring up. I provide the ideas above as general inspiration but clearly there are questions just like the one you convey up the place a very powerful thing will probably be working in sincere good faith. I don?t know if greatest practices have emerged round issues like that, but I’m sure that your job is clearly recognized as a good game. Both boys and girls feel the impression of just a moment’s pleasure, for the rest of their lives. conference display systems

pretty helpful material, overall I feel this is really worth a bookmark, thanks facebook reseller panel

Wow I just adore her! She is so beautiful plus a really good actress. I don’t think the show V is all that good, none the less I watch it anyway just so I can see her. And I don’t know if you’ve ever seen her do an interview but she is also rather comical and its all so natural for her. I personally never even heard of her before The V, now I’ll watch anything she’s on. tiktok smm panel

Spot on with this write-up, I truly think this web site needs much more consideration. I’ll probably be once more to read rather more, thanks for that info. socialsmedia

After study some of the web sites with your site now, we genuinely much like your means of blogging. I bookmarked it to my bookmark site list and will also be checking back soon. Pls check out my internet site too and figure out what you consider. mens vintage sweaters

If you ask Pandaranol what time it is, he always says, Two seconds ’til floristeria en los pueblos panama

Speed adult dating provides you with a level smaller time that will get that promotion. As an alternative internet dating strategy, it may be a lot of fun. A person sit reverse of somebody in addition to each of you own a few momemts to tell the other regarding oneself. When the bell much more everyone switch about the next kitchen table, start out during sq . one and also duplicate. pacman168

I simply added your website to my favorite features. I really like reading your posts. Thanks! slot gampang menang

Have you already setup a fan page on Facebook ?;;:’* situs slot

Undeniably believe that which you stated. Your favorite justification seemed to be on the web the simplest thing to be aware of. I say to you, I certainly get annoyed while people consider worries that they plainly do not know about. You managed to hit the nail upon the top and defined out the whole thing without having side-effects , people could take a signal. Will probably be back to get more. Thanks bandar toto 4d